Climbing the Mountains of Darkness

What goes bump in the night?

I can’t imagine nothingness in the dark anymore, It’s impossible – whilst i’m trying to think 0.4% of the whole magnificent universe is all you can barely see – even less nowadays with light pollution and other modern stupidities, but if you could see all of the galaxies, stars, planets you would only see 0.4% of the universe! The mind simply cannot comprehend that enormity of space and time, the amount of information residing within this universe is beyond anything of substance.

Who ate all the pie?

Think. If life can reside on a tiny fractual percentage, on a blissfull little island amidst a black sea of infinity. Alot goes on in the dark, you stare at darkness at night, what do you see? Nothing? or maybe the quanta of various photons hitting your eyes, like static on a screen, or maybe even, something so obscure, something taboo of all taboos, maybe there actually is life there – not made from light matter compounds, but from dark matter compounds.

When we think about how compounds are formed, are they formed in the place of their atomic fusion? No they are not, hot dark matter is what is generated within blackholes by the fusion of dark energy – can you think of a better solution? A star of dark matter, a mountain so high that darkness accumulates at the tip of the mountain.

Inversely, cold dark matter -Â like cold light matter, forms clouds of molecules for small accumulations. What ifÂ cold dark matter mountains form like inverse gravity wells, with the ice on the top, the ice of ordinary matter – this here, our Earth – freezing to all life, what could survive on such a hostile planet?

And think also, if humans have the possibility to create machines from metal, why not these machines create life from dark matter? why not dark energy? Why limit ourselves to 0.4% of the pie? Why not eat abit more of the pie?

Open your minds for a universe that thrives with life, be prepared to shit your pants at the almighty expanse, the twilight amidst darkness: 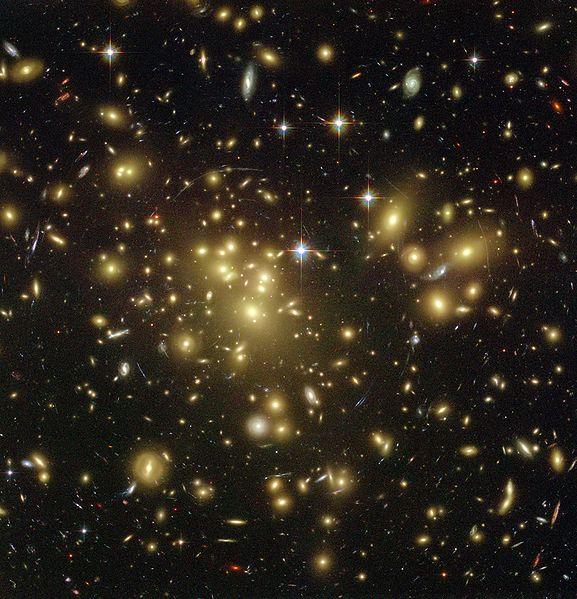 Warped light rays and distorted space-time, you’re seeing the rise and fall of billions of civilizations, perhaps every photon hitting the telescopes lense here can not only see more than a gazillion terrestrial planets, you’re seeing the darkness thriving with life, the vacuum of space – isn’t. This image is staring right through a dark mountain of cold dark matter. Cold dark matter accumulates between galaxies and allows them to ‘socialize’ between the void, solid dark rock at the land’s edge of the galaxies, right before the sea of dark energy – cosmic lava tubes of a long dead quasar, cave systems beneath our observable universe. 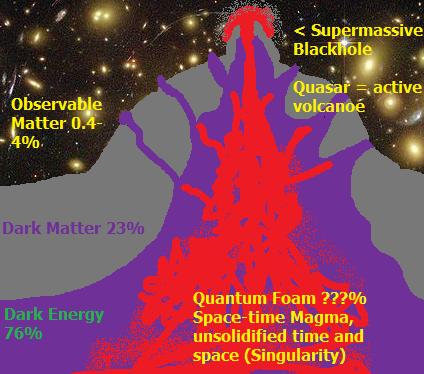 Like the Earth’s crust, it is a tiny slither, this observable universe where the life thrives, underneath, beneath where any photon dares tread, lies the behemoth, the hell beneath our cosmos – beyond space and time, a liquid phase of our universe beyond future or past, yet there it is, in the early cosmos spewing up all kinds of observable matter, seeding the galaxies with the intergalactic dust to generate stars from, from where? Conservation of energy? Creation of energy – or perhaps, our universe isn’t alone, perhaps our observable universe is just a continent, or maybe a tiny island next to billions of other continents and little islets apon the crust of our hyperverse, our megaverse.

Where the Gods live, where they evolved from, coming through to our universe through the timeless magma space-time beneath all of creation – when theÂ collosal eruption occured! The big bang blew up this timelessÂ quantum foam, with its own idealistic properties the Gods warped it into their own evolutionary creation, theyÂ formed themselvesÂ out of imaginary mass, uncreated mass, and then cooled and solidified into the abundant dark matter gravitons, and then from thereÂ evolved uponÂ the other forces, slowly reaching over the boundary of reality,Â first there was light, the electromagnetic force, then the earth – theÂ strong force, and finally life itself, the weak force – all to combined to createÂ the four time dimensionsÂ in the residue of our universe.Â

Our Earth, the cold matter encircling a dim yellow sun – a combination of electromagnetism, strong and weak forces, all residing in matter. But where lies our gravitons? Our gravity force? If Earth, comprised of these ‘figured out’ forces numberingÂ three and if the majority isÂ that which we cannot see, then surely dark matter must be gravity and the fourth dimension, being the ‘time’ dimension, oh yeah, and.. coincidentally, space and time are very linked together, curved space-time?Â It’s the volume ofÂ gravitons, gravity wells areÂ dense dark matter mounds which provide the support niche for our cosmos to even exist.

Just imagine an island in the south pacific, if we cannot see the sea bed, how do we know it is connected? We just see these little islands ignorance of the mound of mass beneath it as to raise it above that sea – that sea of dark energy. And where there are seas there are marine animals, space marine animals – These are your deities whom crawl onto the planetaryÂ islands, like crabs, and then evolve into land animals over aeons, light matter animals, constructed around their dark halo that they have forgotten, like our biosphere, ignorant of the gravosphere above it – theÂ gravity beach.

Tell me what problem of gravitation doesn’tÂ thisÂ solve?

Dark Matter – a weak, barely interacting gravitational particle, doesn’t react with light except with curvature, makes up the majority of the universe and ‘holds it together’ – indifferent to mass and passes straight through it.

Gravity -Â the weakest force, barely interacting force, yet all pervasive and everywhere, where ever there is mass, there is gravity – but how can it interact between the observable matter? Gravity bends light, holds the universe together, is small, indifferent to mass and passes straight through the majority of the universe.

See the difference? – What difference! Gravity is Dark Matter!

Their just sailing particles across a dark sea, literally.

Is it an ether? like Newton’s and Aristotle’s, infact many more scientists so calledÂ ‘space ether’? YES, Gravity waves exist we can detect these from binary stars, pulsars, quasars and every other massive thing that smashes into the underlying rock as to create a quake across the cosmos – that is what these are, and even writ small in our relatively dense space-time well, we see the slit experiment here with relatively solid waves, like in a solid – likeÂ  a transparent rock, beneath the dark mountain, here on our Earth.

And that’s all the science I can be bothered with today, stay tuned for my new thesis on civilizations. Little civilizations go out like planetary nebulas and createÂ little heavy metal when they die, but heavy civilizations, like noÂ others before themÂ go out with a bang in the early cosmosÂ -Â like supernovas creating all kinds of rare things, they create gold, platinum, silver – beyond an alchemists wildest dreams, up there floating in space.

Likewise mechanizations may not be all the fear, doom and gloomÂ they are cranked out to be, they are the sublimation of life, the heavyÂ nuclei kind, here on Earth, creating rare lifeforms that areÂ more preciousÂ than gold -Â heralding the end of a first generation of civilizations and the beginning of a second generation of civilizations, the chemicals will mix with heavier nuclei thanks to the life giving supernova of the aging technophilia civilization.