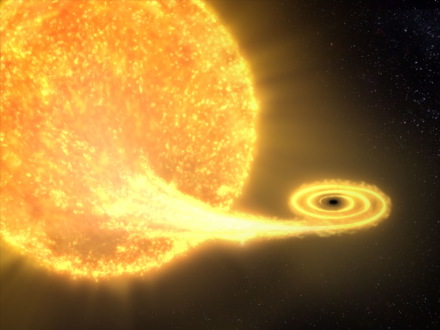 They think that these Black Holes, far from being the absence of anything, are, in fact, a whole lot of somethings, so densely compressed that not even light can escape the gravitational wells of their aggregated mass. Who knows? Maybe they are right.

But there are other kinds of Black Holes. Some are, indeed, the absence of something…

I’ve often wondered just why it is that Left can not accommodate Right, and vice versa.

Why must there be this never-ending, never-resolved schism between two sides of a whole?

Why this seemingly inevitable, interminable, unresolvable conflict that serves only to sap the fabric of each, resulting in ever less?

What the hell is going on here, anyway?

As it happens, I had an idea over coffee and doughnuts, the other day. Well: not doughnuts, since a gluten-free doughnut seems not to exist. Yet. A theory, you might say, burst out of nowhere, and into my mind. It was an interesting one. It went something like this…

It seems obvious, really. But not until it becomes obvious.

Those who tend to the Right, have this thing that is so obvious, to them, that to imagine it not being present, is impossible. These people are unable to fathom a state in which something they take so much for granted, simply is not there, for others.

So what is this thing, that the Left does not have, and that the Right does?

Imagine it as a lack of ego.

The Right sees itself as part of a whole.

The Left sees itself as the whole.

To the Right: its identity is subservient to the whole.

To the Left: its identity is itself.

Self-importance has consumed the Left, to the point where not even common-sense can escape. It lies, crushed and trapped, inside a body that continues to operate â€“ to a degree – without it. This body does not know it lacks common-sense, or even what common-sense is. While the Right observes this phenomenon, and can not imagine what is going on, or why.

There seems no escape from the consequences of this condition, other than the obscure possibility that the Left will suddenly, inexplicably realize that its own ego is destroying all it depends upon for its very survival. Indeed, the survival of everything it seems not to realize it is a part-of. And this, it would seem, is rather unlikely. Such a realization would require an ability to be reverent to the natural order of things; to step aside from being unquestionably correct, and prostrate oneself before that which is greater: Civilization, Love, Life, Nature, Planet, Cosmos. And, dare I say it: the concept of God…

Reverence, or the lack of it,Â  is at the heart of this Black Hole. Without this thing, nothing works. Lacking this baseline, this reference, this context, everything must inevitably cave in upon itself and be lost. For the momentary and worthless pride that is all that ego has to offer.

The schism we see, seems a final state of decay. Whether or not this condition will ever right itself and allow the two opposed states to re-integrate, remains to be seen. But I have to say: It doesn’t look good.

The End of the World Anthem | How civilizations die