The End of the World Anthem 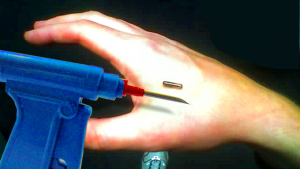 After a long, intensive, exhausting survey of history, politics and philosophy, I have finally figured out how civilization will end. I could have used a wide array of quotes to pump this article up, but I have decided not to, so that this message could be as simple, concise and accessible as possible.

Everywhere around us we see the rise of technology. Already our communication goes largely through text messages, emails and various forms of social media, rather than face to face. There is no reason to suppose this steady trend will not continue in the future â€“ since we can order everything we require by means ofÂ the internet, from clothes to foods to entertainments.

It might not be long before we will be carrying around with usÂ a small microchip implanted in our underarm. This is of course very convenient, because it triggers the lights when we step into our house, it acts as a credit card and as our public transportation permit. It might even record various medical data to tell us and our doctors when we are sick.

However, what if you do an action that goes against the government? Supposedly, Julian Assange of Wikileaks has been cleared of all charges but has been suspended to stay in his house. Isnâ€™t this a strange idea, that someone is placed under house arrest, in a Western society? Previously, it were usually party-leaders or nuclear scientists that somehow fell out of the regimeâ€™s favour. And then not in Occidental countries but in China or Russia. In the future, this might very well mean that as soon as you do something that the government could interpret as a violation against itself, or as a violation of the rules, that the information in your microchip is suspended. This will effectually mean that you will be unable to use public transportation, log in to the internet (since your chip will send out a disturbing frequency) or purchase articles.

In the Netherlands, government officials had already played around with the idea of installing a black box in every car, that would monitor the data of that carâ€™s travels. This black box would be linked to a satellite. With other words; anyone with access to that data could immediately see wherever you are at precisely which time. However this proposition received a lot of negative press, so the government called it off. But I suspect this was just for testing. And, I have grounds to think, if in a few more years consumerism will have completely infatuated society, the common man will have lost feeling with what it means to fight for â€˜self-sovereigntyâ€™, and such microchips might steadily become part of our daily lives.

As soon as anyone violates the rules â€“ bang â€“ thatâ€™s it; youâ€™re out. Effectually stateless and cut off from all forms of digital communication, or at least forced to camp inside your house. And, when the time comes, donâ€™t object: â€œI violated this rule, but who is to say this rule was just to begin with? I question the justness of this rule.â€ Because this is no longer a matter of the morality, ethics or standards beneath a given rule, that you can call into question. It will simply be: â€œThis is what the majority decided; this is democracy. This is law.â€

If you try to speak out and raise questions about the moral foundations of the procedures, your questions will fall upon deaf ears. Because you are trying to express yourself in a language that no longer applies to the government of the future. The government of the future wonâ€™t have anything to do with morality, ethics or enlightened judgement. It will be one big bureaucratic machinery of official regulations â€“ in which the individual citizen is reduced to a single atom â€“ but he does not object to this because all he asks for is a little innocent pleasure and private vice, every now and then.

Perhaps you are right, and have I not described the end of the world properly, and will it instead continue to last. But it will do so for no higher reason than the simple fact it happens to exist.