Your Future Under Diversity 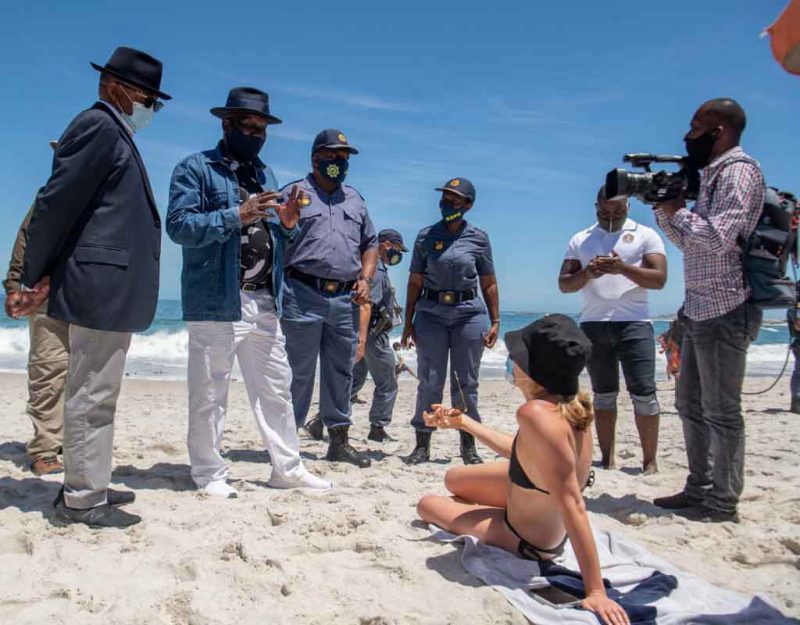 Remember that photo with the Rhodesian wife and her two kids infront of an eight-foot fence with Blacks crowding behind the gate? We have something new: this one is on a beach in Cape Town with the Minister of Police threatening a White woman sunbathing after COVID-19 restrictions forbid it.

The woman was a model in a photo shoot in Camps Bay. The Minister of Police and twelve police cars visited all the beaches around there to stop people being on the beaches, for fear of COVID-19. The Minister is a Zulu, and he did not address thousands of Zulus on their own beaches in another province.

He picked the province where his Party is not in charge and harassed people not overtly overstepping any normal behavior. He really hoped to get onto television to show his compatriots that he is sticking it to the White people, in my view.

Social choices are a zero-sum game. That is, at some point you have to choose how things are done. Maybe you choose democracy, or dictatorship, or a commune; perhaps you choose to drive on the right side of the road, or the left; either way, choices are made because that is how civilization functions.

In a diverse society, this territory of choices becomes a battleground. Every group can have one of two roles: the majority in charge with all the wealth, or the minority who has no power and no wealth. Since the latter is effectively surrender, the groups vie for control of the society.

This means that you see lots of scenes like this: people from one group, cruising around looking for people from another group, simply so that they can do nasty things to them in order to build up a reputation with their own group.

Diversity never works. What we see in South Africa today will be coming to the US and EU in a few short years if they do not change their tune on globalism, immigration, and ethnic pluralism.