You don’t care about the gray wolf 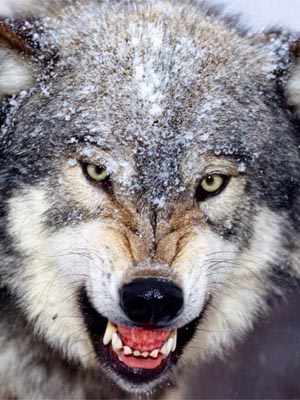 All of those movies you watched, all of those late-night conversations pregnant with mystifying revelation, and all of what you hear on the radio has prepared you to cry over this.

The government is de-listing gray wolves as an endangered species.

That means that these creatures who once roamed abundant across North America will be open to hunting, trapping and killing. If a farmer finds a dead sheep, he is once again justified in opening up on any gray wolves nearby with his AR-15 or SKS.

The left is in tears; the right is not quite smug but too close to it for my taste:

Environmental groups are up in arms over an item in the budget bill removing gray wolves in the northern Rockies from the protection of the Endangered Species Act.

“Never before has Congress stripped Endangered Species Act protections for one particular species, putting politics above sound science and our national commitment to conserving America’s wildlife,” proclaimed the Defenders of Wildlife president.

Did he say “sound science”? In fact, it was the U.S. Fish and Wildlife Service that first tried to remove wolves in Idaho and Montana from the endangered list, in the Bush administration. A court rebuffed the attempt, and the Obama administration withdrew another delisting proposal when it took office.

But upon further review, Obama’s Interior Department â€” led by Colorado’s Ken Salazar â€” reached a similar conclusion: With the exception of Wyoming, wolves in the northern Rockies were no longer endangered. – [+|The Denver Post]

From the right they say it’s science. From the left, they say it’s murder. And outside the Northern Rockies, the species still struggles:

Scientists tell The Associated Press the wolves of Isle Royale National Park may go extinct because they are dangerously short of females.

Wildlife biologists John Vucetich and Rolf Peterson of Michigan Tech University say they counted 16 gray wolves on the Lake Superior island this year â€” and just two at most are adult females.

The overall wolf population is the lowest since 1998, when it was 14.

Unless the females successfully raise pups before dying, the entire population could disappear. – [+|Atlanta Journal-Constitution]

How do we reconcile these two disparate viewpoints?

First, recognize that the news (and especially environmental news) is garbage for morons to cheer at. They are selling you a product. And since they have no hope for really fixing the proble, you get a steady stream of non-solutions. The environmentalist side has hyped this issue out of context, and made it apocalyptic.

Second, think about what a real solution would be. The gray wolves in Atlanta are dying out, and the gray wolves in the Rockies are thriving. If they are the same population, presumably once these two shared an origin.

What has changed? Wolves can no longer roam across America. Their territory is limited to some federal land, some farm land, some military bases, a few parks and several private reserves.

But no longer can a wolf kick up its heels and wander from Atlanta to the Rockies. Hunters aren’t the problem. Traffic would kill that wolf, and if not that, it would die trying to find a way through the maze of fences and walls that now take up the territory there.

Take a peek at an aerial photo of the range the wolf would have to cross. What do you see? Or more likely, what don’t you see?

You see patches of conserved forest, but none contiguous or anywhere close. And the rest of the land is either farms, divided by fences, suburbs, cities, industrial courts or covered in concrete. All of it is litter-strewn. None of it is isolated from humanity.

Environmentalists like to play up the cuddly nature of creatures, but the truth is that they’re wild animals. They kill to eat. They will attack you if you threaten them. And if you leave out easy meat, like a cat or dog or sheep, they’ll tear its head off and consume it.

Humans and wolves can’t play nice because we need the same thing: land. You don’t care about the gray wolf, because to save the gray wolf requires we stop taking up land that this animal needs to hunt, breed and nest.

If we as a species cared about the gray wolf, we would actually design our cities and roads to leave open spaces for not just the gray wolf, but its prey and the animals those prey animals eat. We would have to keep the whole ecosystem intact.

And that’s just not as exciting as buying up 40,000 acres of government land for cheap, building a subdivision, Wal-mart and cocktail lounge, and calling it a way of life. We weep for ourselves because in not caring about the gray wolf, we forgot to care about our souls as well.