Why the bad economy is good for productive people

In the roaring 90s, people seemed proud of their idiocy. Consumption turned into a religion; growth seemed endless, new industries were popping up everywhere, and armchair philosophers were given a global voice in the form of America Online and other similar services.

While this chapter continued in the early 2000s, now growth is going the other way and jobs are harder to come by. Recently, I’ve noticed that:

Generally speaking, the parents of the baby boomer generation, most of whom are now dead, are probably laughing at the excess of their children and grandchildren.

The last point above has been interesting to see unfold in the workplace. Things might be busier picking up some of the menial tasks reserved for specialists who are now out of work. And just to be clear, being laid off doesn’t necessarily mean one is useless. Companies make decisions about reducing numbers that can be platforms for political action all the time, such as laying off the straight-shooter who doesn’t play the game well but is still an asset. But for the most part, those who remain are either forced to change into productive members of the company, or always were. 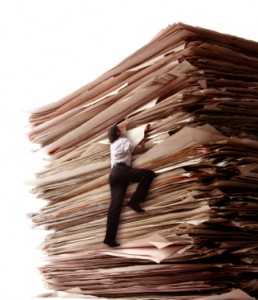 With fewer jobs available, and thus fewer people doing more work, companies naturally realize efficiencies. The people who are left need to be productive or risk being let go as well, and the ones who are the most productive really shine because they don’t skip a beat after their friends are laid off.

Companies also find a renewed desire to drive innovation during bad times. In good times, one can argue more ideas get venture capital money, but the problem is that both creative and uncreative ideas get equal attention, as whatever sells is most important in a good economy. In a bad economy, it’s more about sustainability. The companies that innovate, are more efficient, and keep a smaller but more productive workforce are generally the ones that don’t topple over their own executive-level weight (see General Motors and Chrysler).

The problem is this is part of an unfortunate cycle. Large corporations in particular are known well for excess during good times. Too many layers of middle and executive management; too much money being thrown at dimwits; too many bad ideas given wings just to see if the consumer is quite dumb enough to latch onto something that’s just a pretty face on an old product (iPod/iPhone anyone?). Round and round we go.

What we need are more corporations run as if they’re caught in a perpetual downward cycle. Another way to say this is we need more corporations run by intelligent, well rounded people instead of people who are just good at making money and smiling. Instead of waiting for a bad economy and then innovating, companies should always strive to be lean and productive. While there’s a place for capitalism in society, this cycle shows that it shouldn’t be anywhere near the top of any society’s priority list.