Why the Alt Right Won’t Succumb to Leftist Hysteria 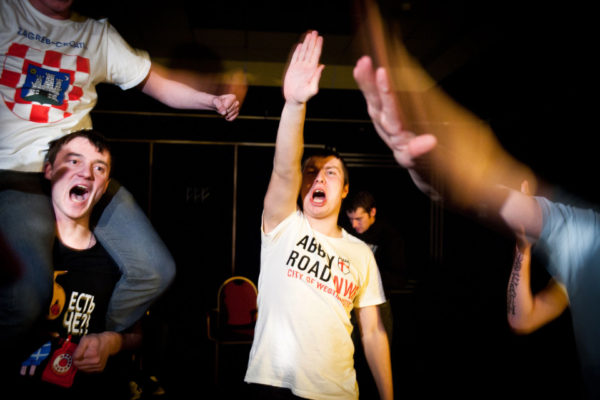 Why is using NSDAP imagery a bad strategy?

First, the Alt Right does not equal National Socialism, so Alt Rightists would be misrepresenting themselves. But we also arenâ€™t Libertarians, yet there is no outrage when Alt Rightists use Libertarian sources. So this is not the real reason why using NSDAP imagery is a bad strategy.

The real reason is that people in the political mainstream have a conditioned repulsive response to NSDAP imagery: their minds shut down when they see a swastika, and they become unable to consider any ideas with such branding or association. This is reinforced by mainstream media that actively vilify and attack NSDAP symbols and ideas. Because of this, introducing anti-progressive, anti-liberal, and anti-modern ideas to them generally works more smoothly without it because it denies them that excuse to stop listening.

However, there is a problem with this. That conditioned response is not triggered only by NSDAP imagery. It is also triggered — though to a duller degree — by any hint of suggestion that significant racial or sex differences exist, by critiques of democracy as a fundamentally flawed system, and any lack of support for egalitarianism. Even expressing the desire for the continued existence of European people can cause alarms and inhibit thought in those who are in the political mainstream.

Further, the mainstream media make no distinction between genuine NSDAP convictions and any anti-egalitarian ideas. Those who make purely scientific observations about racial differences are still called â€œNazis.â€

And so the same reasoning that suggests complete rejection of any symbol associated with the NSDAP in any way would also seem to suggest avoidance of the very ideas that are at the heart of our cause. In order to not be shut out of mainstream discourse, and in order to avoid being tarred with incorrect labels that reinforce that censure, it seems we must water down our communication to the point that anything substantial is lost, and simply hope that one day WWII propaganda and the mass media that reinforces it will fade away on its own.

This is obviously not a sound strategy. We have two routes around this impasse.

With the first, we can charge ahead boldly and speak openly, honestly, and unapologetically the truths that need to be said. We will be vilified and attacked, and many will shut off their minds when they hear us, but the conditioning is not absolute, and brighter minds (which are more important to us) will have a chance of breaking through. We will never convince everyone, but we donâ€™t need to or want to. This is the path that has been taken by this site.

With the second, we can meet Hitler in a warm embrace, emblazon the swastika on hitherto innocuous cartoon frogs, and crank up the death camp ovens to 6,000,000 degrees. Take the Nazi straw man that has been wielded against us, pump him full of post-ironic steroids and send him back to the enemy so that their absurd hysteria entertains and delights us. Create such an over-the top scathingly mocking caricature of the leftâ€™s caricature of us that the epithet â€œNaziâ€ falls limp and impotent from their hateful lips. This is the path taken by sites like The Daily Stormer.

What must be recognized is that those in the first path do not benefit by attacking those in the second. Doing so will not save them from being labeled â€œNazisâ€ — nothing will. Now is not the time to be tip-toeing around the left in the hope that theyâ€™ll leave us alone. Even the flimsy excuse of not wanting to hurt Trumpâ€™s image has become completely irrelevant now that he has won.

On the contrary, those who take the first path have much to gain from the success of the second path. If these trolls and jokers succeed in breaking the NSDAP taboo they will have opened a wide space of ideas in which all the principles and ideals that lead to an ascendant civilization can breathe freely and thrive.

The left has absolutely no credibility. At this point, this rare chance we have with Trump, this narrow opening through which we may possibly use political means to save our civilization it would be utterly foolish for us to pay any attention to leftist hysteria except as an opportunity for exploitation.

Realize that any leftist, any mass media outlet that would attack the Alt Right because of a few audience members raising Roman salutes would have attacked the Alt Right in any case. Instead of succumbing to your their hysteria and bickering with your allies, focus your martial energies on your enemies!