Why people hate the internet 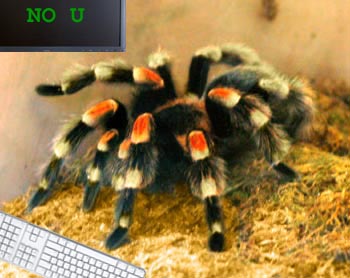 I know there’s some people out there who like to tear down any ambition because they’ve lost their own.

Frequently, they accuse others of treating the internet like SRS BSNS while spending hours on the internet.

They deride others’ work as “gay” or “stupid” while pushing around their same failed projects, or lives that basically have no direction.

Such people are the first to call someone else stupid, and to demand that their own “rights” be respected, but the last to do anything important.

They exist at a level of conversation and symbols, promoting themselves by trying to undercut others with insults, vitriol, mockery, and so on.

Nietzsche called these people tarantulas because they thrive on the misery of others, having nothing but misery for themselves.

The internet empowers such people because it makes it easy to pretend you’re more than you are. $500 computer and $50 a month for internet is all it takes. The knowledge required is menial.

I find it interesting how these people are the first to accuse others of being internet addicts, usually when those others propose some form of action. However, the accusers are the ones who spend every evening on the internet just trying to socialize.

And who wants to be so socially broken they can only socialize through the internet, where every persona is fake and compelled to like you because you have tastes or lifestyle choices that reinforce their own?

Tarantulas are miserable because their lives didn’t work out the way they wanted. And in desperation, they have only one goal: destroy others, or any ambition, so they feel better about their own dead ambition.

This is why we hate the internet. It has captured the welfare cheats, deadbeats, basement dwellers, disability fakers, callow youth, television addicts, people who cannot tell fantasy from reality and people who love to lie about themselves, and given them a power they could never have in real life.

And then their behavior is appalling only to those who could see the possibilities of something better than angry monkeys tearing each other down to feel good about the next 8-5 shift doing something menial: food service, call center, what used to be called “clerkship,” and so on. Jobs that a trained monkey could do without using its brain.

On the internet, they are kings. In reality, they are cyberpeasants.

Abortion killings | How it got this bad