Why Keystone Got Shut Down

If you want to make it to the big, plush corner office, then you kiss the right butts and do what you are told. That includes the big corner office on Pennsylvania Avenue. Joe Biden won’t be composing any new Special Theories of Relativity, but he knows how to brown nose a boss. If Big Oil ever came to a sudden stop, President Joe could well be short an olfactory organ. When the boss has a problem, Good Old Scranton Joe is there with a freshly polished apple and a solution.

So what sort of problems does President Joe need to solve for his employers from Planet Exxon? They are currently stuck in an Oil Price Trap. The contract prices for oil have a support level at $30/bbl. The boss appreciates that. What chaps his Armani clad rear end is the ceiling at $35/bbl. That price, which determines the boss’ $profit/bbl, is a particle in a box. 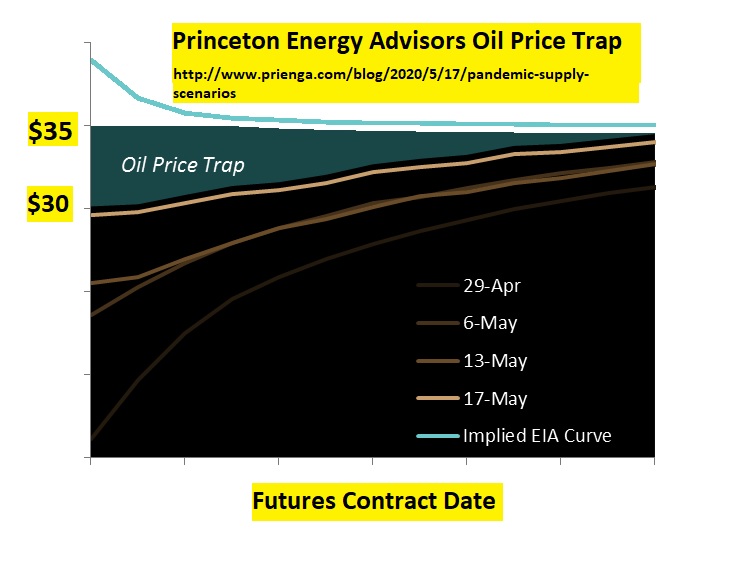 This oil price trap is partially an artifact of the pandemic and partially a result of the economy working the way it is intended to. The floor of the price trap is a result of the lowest marginal cost to produce a blue barrel full of oil. The ceiling is a more complex situation. People stopped using gasoline when they got locked down but the refineries and wells didn’t stop producing until the memo went out. This caused a glut to flood a market that wasn’t buying. That slaps the ceiling on the price until that stored volume of liquid product is burned off.

One way to pry that ceiling off faster is to make it tougher to get more product out into the tankers. Cutting production is step one.

Brent and WTI have risen more than 60% since the start of November due to optimism around coronavirus vaccine distributions as well as production cuts from OPEC+ members. “There seems to be a paradigm shift in the market,” said Phil Flynn, senior analyst at Price Futures Group in Chicago. “There is a sense that the glut of oil supply is disappearing more rapidly than anybody thought possible.”

If you really want prices jacked up to where the big boys can rake in the clams, you need to dismantle any source of convenient competition. It’s tough to undercut the big boys, if you can’t even get your product to the market. Take away the pipeline, and you take away all the inconvenient excess product.

There are MAGA Freaks who object.

“We write with alarm regarding your unilateral and rushed decision to revoke the 2019 Presidential Permit for the Keystone XL pipeline,” the letter, organized by Montana Attorney General Austin Knudsen and co-signed by the AGs of 13 other states. “Your decision will result in devastating damage to many of our states and local communities. Even those states outside the path of the Keystone XL pipeline – indeed all Americans – will suffer serious, detrimental consequences.”

But who are these guys? Nobody with a known name gives a crap about those people’s jobs. Those people don’t move the needles that matter. To quote an obscure Everlast lyric. “Crime don’t pay unless you ask the mob.” Biden told those fvckers he didn’t need their stupid votes. More than just once.

Incentives decide elections in an anarchotyranny pretending to be a democracy. Politicians no longer stack voting blocks. They stack warring bank accounts that represent various interests. No interest wields more real power than the one that produces the vast majority of the power that makes it possible to keep the lights on. When a baron owns the oil, that baron owns the potential energy of a society. Without that guy on the team, the future of kinetics driving economic activity becomes cloudier.

Viewed from this aspect, we can see how the energy industry’s matrix really works. Peak Oil was formulated, evangelized, and popularized by a Geologist working for Shell Oil. How coincidental that it tends to put an upward bias on the $/bbl price of oil.

Hubbert’s peak theory is the idea that, because oil production is a non-renewable resource, global crude oil production will eventually peak and then go into terminal decline following a roughly bell-shaped curve.

When pollution problems and the 1970s OPEC Crisis pushed people towards exploring the possibilities of more nuclear power plants to produce electricity, an industry sprang up from seemingly nowhere to stop nukes in their tracks. Bruce Springsteen, Carly Simon, Jackson Brown and numerous pieces of Hollyorc trash made major bank on pushing the whole “No Nukes” message. This had nothing to do with nuclear weapons. This probably had to do with fossil fuel producers getting nuked.

That oil price trap? President Biden has gone to work on that one with tongs and a hammer.

Since Election Day, gas and crude oil prices have jumped. In the United States, gas prices are up 18% and oil nearly 50%. Said another industry expert, “In four years, we had made the U.S. energy independent and denied the bad guys the ability to control global oil prices. The Democrats undo it in two weeks. Just incredible.”

And according to economists at the USG, it is no longer producers who face an Oil Price Trap. Those oil prices that just got rigged like the 2020 Election are only headed in one direction.

There are still idiots who claim we can just vote harder and make this go away. You can’t. Democracy has been replaced with anarchotyranny. Your power is strictly materialistic. If you have materials, you have power. There is no more important a material than the primary source of energy to power the prime movers of the economy. President Biden will be sending that price of energy exactly where the oil companies order him to. Joe doesn’t know much, but he does know exactly who he works for in life.