When Did Women Enter the Workforce?

We often wonder when changes that occurred to our society became permanent, classed as “too big to fail” or “fundamental transformation.” Since we are going to have to un-do most of these, we should look back to when they became normal and see how brutal the effect was.

Many have pointed to the rise of women in the workforce as a positive thing:

Not until the mid-19th century did the role of the male as the “good provider” emerge, with women taking over most household and domestic tasks. This transition may have stemmed from a growing humanitarian protest against the harsh treatment of women and children in the early factory system. Legislation—most notably in Britain—raised the minimum age for child labour in factories, set limits on the working hours of women and children, and barred them from certain dangerous and heavy occupations. Thus, women engaged primarily in domestic tasks such as child care while the men went out to work.

In the 1970s married women began entering the labour force in great numbers, and the strict segregation of women into certain occupations began to lessen somewhat as new opportunities arose for female workers in traditionally male occupations. New technology has meant that many tasks that once required heavy physical exertion, and hence were restricted to men, can now be performed simply by pushing buttons. Operating a bulldozer, for instance, does not need muscle power so much as alertness, judgment, and coordination—qualities as plentiful in women as in men.

However, one wonders, since doubling the workforce always makes each worker worth less. This leads us to ask what went wrong; some identify 1971, the year when the gold standard went away, as the crisis point, but others like myself look at the socialist-style entitlements and diversity changes of the mid-1960s.

We can see the effects clearly as WTF Happened in 1971? shows: 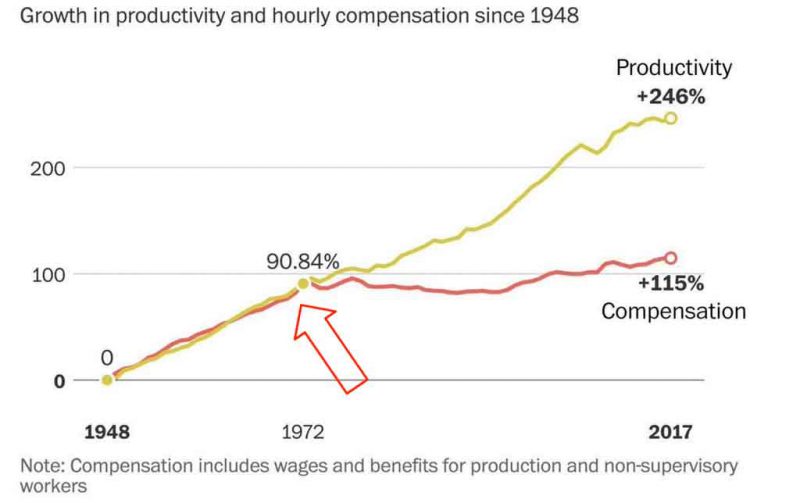 Looking at the gold standard may be tempting but it makes no sense, since it takes a half-decade or so for changes to manifest. What happened in 1971, then, was the sum total of what came before, with the most recent changes being the most influential.

In 1965, we changed our demographics, added a socialist economy within our capitalist one (building on our 1930s expansion, but with more permanent programs), and began aggressively pursuing a civil-rights agenda, including with JFK’s invention, affirmative action.

Similarly, each of our wars has produced a loss of social hierarchy, an introduction of foreign DNA, and more power to the lower classes. Societies decay over time through foreclosed options, and with each group brought to the table, more options are foreclosed upon.

We can in fact see the switch from the gold standard as necessitated by the socialist entitlements of the 1930s, themselves spurred on by the expanded role of government leading up to WW1 and its debt following the war. The more we adopt a System, the more it consumes us.

Life may be best in its natural form. Wise kings and aristocrats manage the land and wealth, and defend against foreign threats, while the rest of life falls under culture, not a micromanaging nanny-state bureaucracy. Life finds a way; nature produces beauty and balance.

Democracy inevitably rejects that, since its core principle is the Big Lie (“equality”). To avoid appearing arbitrary, it must expand equality in all directions, making it too big to remove. This is exactly why we must remove unless, unless we want 1971 forever.