What Divides Us: Modernism Versus Organicism 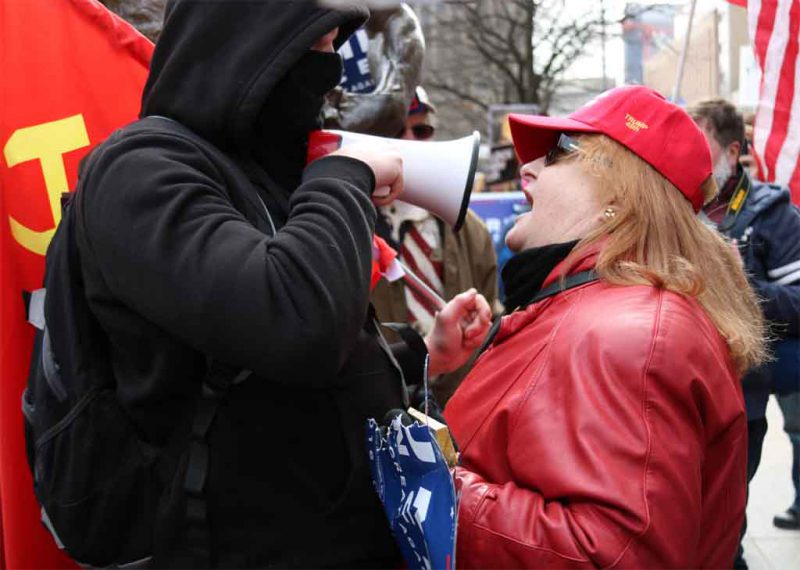 Once upon a time, it seemed that pundits were paid to elucidate the issues. Now it is clear that their real goal is to distract from actual issues while providing interesting alternate truths that will keep us distracted until it is too late to do anything about the actual issues.

Pundits like to say the West is divided by rural versus urban, Right versus Left, or rich versus poor. None of these explain the actual division, which is between two different types of civilization that people desire which are opposites of one another.

What actually divides us proves more complex. Two different groups inhabit Western society, politically, and each wants a different civilization than the other. One desires a bureaucratic egalitarian society, and the other, a hierarchical organic one.

As explained by a historian, these divisions became apparent during the Civil War and persist to this day:

Yes, there were big differences between North and South a century and a half ago. The South was a slave-holding, free-trading, libertarian-leaning, conservative Christian, agricultural, aristocratic Sparta, while the North was a commercial, industrial, protectionist, Transcendentalist, social gospel, democratic Athens.

…In the end, the war was fought over a single legal issue: whether the states that had freely ratified the Constitution to form the Union could freely leave the Union if they felt it no longer served their interests.

…And far from being a national socialist charter, the Confederate Constitution puts even more restraints on federal power and limits the president to one six-year term.

Sparta versus Athens plays out time and again, but the actual division is more fundamental: those who follow an organic way of life versus those who want a life designed around human, and not natural or metaphysical, values. The former group likes independence, the latter group wants enforced equality.

When you live in a cosmopolitan cities in which factories are the primary source of income, egalitarianism becomes addictive. None of you have any culture; you have no role other than your jobs. Thus, you make jobs your primary form of identity, and replace culture with a novelty-based stream of entertainment and distractions.

To live in the South, you had to appreciate nature, and see the wisdom of God in the bends of the trees and the flight of the bees. You had to believe that each person was born to a unique role which fit their abilities, and that working together unequally, you could raise a civilization which was greater than the sum of its parts.

In the North, bourgeois sentiment reigned. You had to believe that each person was accountable to nothing except himself, that his work would give his life meaning, and that the mechanical schedule of the city could replace customs, culture, calendar, and heritage. You lived only for yourself, as one equal part of a vast machine.

The term “progress” originally meant the slow swallowing-up of the villages and heartlands of Europe and America by the mechanized city and its need for humans as a fungible quantity, all equal and motivated only by money, so that industry could depend on them to act in predictable ways.

The South took one look at the North said said “no way.” They wanted a life based more in enjoyment of the beauties of life than in converting life into a product, and the cultivation of a vast audience of cultureless people to purchase these products.

In this way, the South represented the ten percent in The Dad Theory. If you recall, The Dad Theory was an idea advanced by my father which states that ninety percent of humanity are narcissistic animals concerned only with self-gratification, where ten percent are aware of something more and inclined to work toward goodness and beauty.

This ten percent are the natural leaders of humankind. When they are in power, society advances and the workers, who really have no idea what to do with themselves when not working, are placed in a subservient role where their lack of impulse control cannot be a problem.

Organic people of this nature distinguish themselves by having a sense of purpose in life. They mature, look around, and find some way to make things better, not just in the sense of efficiency or productivity, but quality. They make life more graceful, elegant, joyful, balanced, harmonious, beautiful, and wise.

The crowd — those who cluster in the cities around factories and government offices — lack an ability to have purpose and can only react. When they need money, they go to a job; when they see something they like, they buy it or steal it. They are driven solely by appetites, which is why former societies called them serfs or plebs.

Their elites, driven to support the population in which they find themselves, adapted a philosophy to defend this way of life known as “egalitarianism,” or the notion that everyone is equal in worth and therefore deserves a seat at the table. This contrasts the organic notion of hierarchy, or moving the best people above the rest of the herd.

Egalitarianism provides each person in the hive-mind of a city with a sense that their position is affirmed, but this reflects an inner sense of paranoia created by the nature of equality itself:

Paranoia is the tendency to assume other people are trying to harm you when their actual motivations are unclear, and this tendency is increased when interacting with someone of a higher social status or opposing political beliefs, according to the study published today in Royal Society Open Science.

“Being alert to social danger is key to our survival, but our results suggest social difference alone encourages us to think that the other person wants to harm us,” said the study’s senior author, Professor Nichola Raihani (UCL Psychology & Language Sciences).

“Intense paranoia is also a symptom of mental ill health, and is more common among people who perceive themselves to have low social rank. We believe our findings could shed light on why paranoia is more common in those who are struggling on the social ladder and excluded by society,” she added.

When people are all equal, no one has a role which is protected from being usurped by others; as a fungible stream of humanity, the herd all fit within any role if promoted to it, so every person must fear whoever is coming up behind them to try to take what they have. This makes the herd inherently defensive and prone to attack.

This leads to other bad mental contortions, causing them eventually to converge on the cluster of traits that our society has traditionally seen as undesirable. Without a firm foundation, they are cast adrift, and they look to anything other than what they have as a hostile invading force, even when it shows no signs of aggression.

Organicism opposes this paranoia with the notion that everyone has a place, even if not an equal one; modernism, in its zeal to make people equal, creates instability since no one is actually exceptional, and they have nothing except what is granted to them by the herd, like job titles and money.

The personal focus of modernism makes people blind to any morality above the individual. They see what is good for them as good, and ignore any larger other than themselves, except of course what enables their selfishness, egalitarianism itself.

This quickly leads to a breakdown of the mind and legitimization of the idea that their personal views are equal to reality, or a form of reality themselves:

First there was a study showing that liberals are more likely than conservatives to exhibit “psychotic” traits. Now there’s more research that may indicate the Left has left sanity, with a new study of nationwide psychoticism finding that liberal states top the list.

…Whether or not this sounds like anyone, or any group, you know (or wish you didn’t), writer Peter Schweizer may say it does. In his 2008 piece “Don’t listen to the liberals — Right-wingers really are nicer people, latest research shows,” he reported on studies showing that leftists manifest many attitudes that correlate with psychopathy. For example, they’re more likely than conservatives to agree with the statement that “there are no right or wrong ways to make money” (mostly because they don’t believe in right and wrong to begin with).

As mentioned earlier, Professor Murphy’s research reflects a previous study, a 2012 paper in The American Journal of Political Science. It showed that liberals exhibit more authoritarian traits and “psychoticism” and thus are more “uncooperative, hostile, troublesome…socially withdrawn, [and] manipulative,” as the paper puts it.

…But is this a psychological phenomenon, as social scientists say, or a philosophical one?

The modernist mindset, because it is caught in a paradoxical philosophy, maintains a delusional state of mind. It attempts to force on nature what is not natural, and mistakes nature for a physical thing, instead of an intangible order. As a result, it is always unstable.

Realist philosophies — those that measure themselves by how reality works, instead of what we want it to be — do not suffer this instability because they are not seeking to judge or replace nature. They recognize it as a mathematical or informational order underlying all being.

Those who argue for what “should” be instead of the natural order find themselves unstable because their position is vulnerable. If their ideas fail, their entire outlook becomes debunked and empty. Their viewpoint, which is entirely conjectural, hinges upon their “new” ideas succeeding when applied.

This causes them to have a permanent victimhood mindset because they feel assaulted by the possibility that reality is correct instead of their ideas, and this makes them fear anyone who has not joined them in their delusion. This permanent victimhood mentality creates a fearful, paranoid view of reality:

Participants in the trigger warning group believed themselves and people in general to be more emotionally vulnerable if they were to experience trauma. Participants receiving warnings reported greater anxiety in response to reading potentially distressing passages, but only if they believed that words can cause harm. Warnings did not affect participants’ implicit self-identification as vulnerable, or subsequent anxiety response to less distressing content.

This shows us the real divide in America: those who accept the cosmopolitan Leftist vision, and those who refuse to be drawn into that herd. This presents not so much a question of two viewpoints, but one viewpoint, and those who go along with it versus those who opt out, even if they do not oppose it.

The Civil War showed us the nature of “progress,” namely that it created cities who in their instability and paranoia then wanted to absorb the rural, traditional, and organic South so that it would not accidentally challenge them by succeeding without their ideology.

That divide continues to this day. The ideologues, living within a society based on their ideal of egalitarianism, want to conquer all others so that the ideology itself is not proven to be wrong or irrelevant, while the rest want to continue living as humans have since the dawn of time, in harmony with the order of nature.

At some point, we must admit that human societies are taken over by a force from within which is created by the same impulse that makes cosmopolitanism, namely a desire to have the human individual be more important than the natural order in which it resides. This creates an angry mob opposed to reality.

For us to rise to the occasion of reclaiming not one society but every society worldwide from the death cycle in which they find themselves, we must first purge ourselves of illusions, starting with the modernist notion of human preferences being more important than reality itself.

Those of us who avoid that deceptive mentality find ourselves on the side of the organicists, who believe that life begins with recognizing reality, and continues when we find ways to make our lives beautiful and enjoyable instead of merely functional.