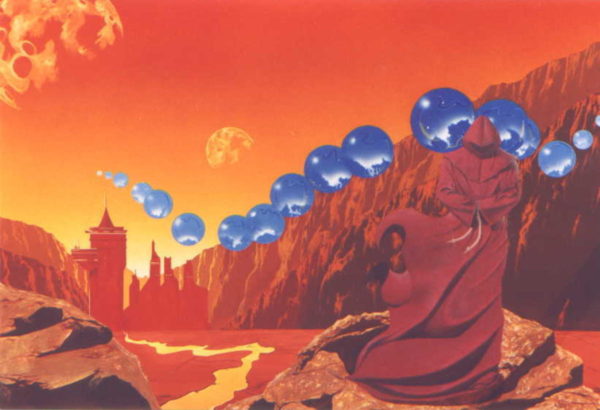 Of all the films based on books ever created, The Martian Chronicles may be one of the most haunting. This was shown to America on regular television as a “miniseries” over a few weeks in 1980, at the height of the Cold War, and it unnerved many people. In particular, one scene showed what it is like to awaken to the facts about modernity.

Captain Black: What if we actually have landed on Mars, OK? So this small Illinois town is not really an Illinois town.

Captain Black: And these people are not my friends, not my family. They’re Martians disguised to look like Earth people. And my mother is not —

Edward: Is not our mother? Then what about me?

Captain Black: And you’re not my brother Edward.

Edward: No, Arthur, I’m not. Suppose there were Martians, and they saw a rocketship landing, and had no defense against its weapons. Suppose they used the only real defense they had: telepathy. Suppose they picked up the childhood memory of a town from the captain of the ship. Suppose the town was deliberately populated with the most loved people from the memories of all the ship’s crew. People like Marilyn Becker. All the men seeing mothers, aunts, uncles, fathers, sweethearts… dead ten, twenty, thirty years ago, abandoning their ship. Would there be any other way, to divide and overcome invaders?

Edward: No, we couldn’t disguise the air.

This is what it is like to come to consciousness in a modern time, and to realize that all of your institutions are fake, that your fellow citizens have ill-intent and not good, that your society has fallen and is dying, and that all of the world seemingly wants you dead so that it can plunder what you have.

Nothing is as it seems. That which says it is good, is in fact evil; that which pretends to be normal, is abnormal and twisted; even those you love are impostors, masquerading as loving family members when they are infected from within by the idea that is modernity, an idea of power that corrupts every human it touches, the notion of equality or “I can do whatever I want, and no one can tell me otherwise.”

To wake up is to realize that you are surrounded by enemies. To know finally that your hometowns are fake, and every public act is an illusion. To recognize that everything you think you see in fact consists of imitations, and that these are designed to deceive you until the poison kicks in.

You cannot go back from this point. You have seen and cannot forget. There will never be a sense of home or safety again. Instead, you realize that you are a hunted animal among packs of fake friends and family members, and that they will not stop until they destroy everything you love. This is the process of Awakening, and you can never go back.

Nihilism As A Management Theory For Human Organizations | Christianity And Paganism