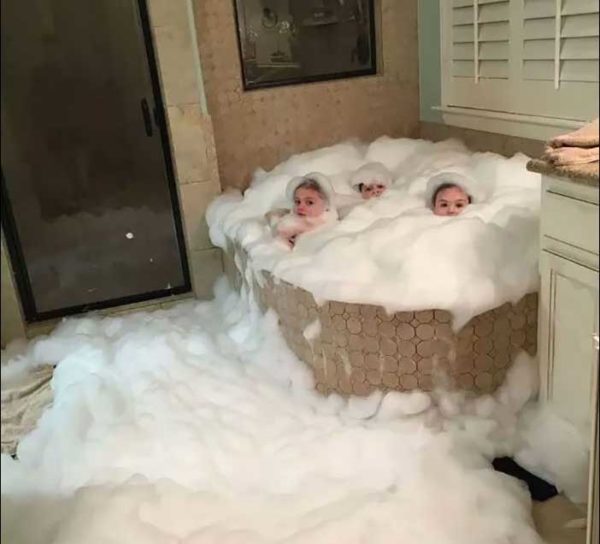 For years, we were told that the West was dying because it was not reproducing. Now it turns out that this was merely data sampled too soon, and that people are reproducing, but they are doing it later in life and so they did not show up in the statistics.

Although the media has not caught up with the news, this general shift was known five years ago, when one paper found that low fertility was reversing (full study) in the industrialized world:

We produce new estimates of the actual number of children women have over their lifetimes â€“ cohort fertility â€“ for 37 developed countries. Our results suggest that family size has remained high in many “low fertility” countries. For example, cohort fertility averages 1.8 for the 1975 birth cohort in the 37 countries for which average period total fertility rate was only 1.5 in 2000. Moreover, we find that the long-term decline in cohort fertility has flattened or reversed in all world regions previously characterized by low fertility. These results are robust to statistical forecast uncertainty and the impact of the late 2000s recession. An application of the new forecasts analyzing the determinants of cohort fertility finds that the key dimensions of development that have been hypothesized to be important for fertility â€“ general socioeconomic development, per capita income, and gender equality â€“ are all positively correlated with fertility for the 1970s cohorts. Gender equality, however, emerges as the strongest determinant: where the gap in economic, political, and educational achievement between women and men is small, cohort fertility is high, whereas where the gap is large, fertility is low.

The important factor regarding “gender equality” is simply that in Western Europe, women are protected from their jobs while they are pregnant, which allows them to afford fertility (but not as much as they could afford with the traditional nuclear family model with a working father and no women in the workforce, which would make labor supply smaller and thus more valuable, without having to spend twice on business attire, commuting and other working costs). We can see this fertility through anti-work in action in Germany:

In 2015 more babies were born in Germany than at any other point in the past 16 years. Not only have the baby numbers gone up, but the number of official marriages went up 3.4 percent from 2014 to 2015. Smells like somethingâ€™s cookingâ€¦

Interestingly enough, since 1972 Germany as a whole has been losing people more than they have been gaining.

…Due to the great decrease in population in Germany, the country has offered a bundle of benefits to encourage young couples to have children.

What exactly are those benefits? Mainly, that the woman can escape work and take some time to raise the children:

As soon as a woman informs her employer she is pregnant, she is covered under maternity protection. That means, legally, she canâ€™t get fired.

Pregnant employees have to take a leave of absence six weeks before and eight weeks after their expected birth date, while still receiving 100 percent of their salary from their employer.

Then there is this great benefit called, Elternzeit, where both parents â€“ yes both â€“ can take leave for up to three years and have full employment protection.

But wait. There is more money stuff, weâ€™re not finished yet. Moreover, there is Elterngeld and Kindergeld which is additional financial support from the German government. A family can receive â‚¬100â€“200 or more a month, depending on how many children they have.

Other governments have caught on, and even have justified the baby boom as a means of increasing tax revenues, as is the case in Denmark, which used bizarre advertising to encourage fertility:

â€œThe Danish welfare system is under pressure. There are still not enough babies being born, despite a little progress. And this concerns us all.”

…Nine months later reports have suggested that Denmark is set for a baby boom with 1,200 more babies due to be born this Summer compared to last year, The Local reports, citing a report in the Danish broadsheet Politiken.

In Poland, Russia, and Ireland, the same pattern is occurring, even without the subtly brilliant advertising. This suggests more than a reversal by convenience, but a change in historical cycle. The data regarding UK fertility tells more of the story, but gets the cause wrong: 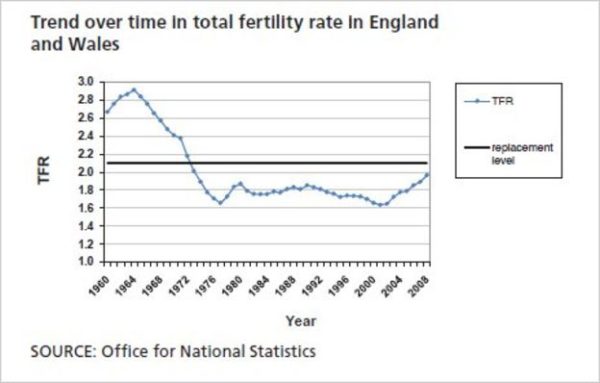 The graph tells the story: the high fertility rates (TFR) of the sixties plummeted with the availability of the contraceptive pill and stuck well below the level required to replace the population for 25 years.

It was a similar story in many developed European countries and the warnings inspired some governments to introduce policies encouraging their citizens to breed.

The Left wants us to blame the Pill, and surely it shares some of the blame, but what is more likely is that social changes such as causal sex, loss of tradition and collapse of social order savaged the family. To a Generation X kid, this makes sense because we saw families split on a whim and people, unmoored and anchorless, raging across the dating scene making bad decisions, all of which took time, energy and money that would otherwise have been spent on making a larger family.

Even more, it scared people off of having families. If your only option is to wait for some girl to get tired of casual sex when she gets too old to be a big hit at the clubs, then have her walk out on your family whenever it gets inconvenient, and also have a sympathetic feminist judge appoint her alimony and child support so she can introduce you to her latest casual boyfriend who is living partially off of your money, you may opt out of marriage entirely, and a good many of Generation X did exactly that. It is easier to have a perpetual girlfriend, or a series of five-year relationships, and birth control just makes it easy to stay in perpetual adolescence in this way.

All of these changes kicked in during the late 1960s, but the effect was really felt in the 1970s, when divorce and continued casual dating became the inevitable norm.

Starting in the 1990s, however, as global Leftism eliminated the Soviet version and selected the working hybrid socialist-capitalist model that, ironically, the National Socialists had pioneered, people began to instinctively pull back from the group-think of Leftist thought, which liberated them to go their own way on marriage. Generation X took another decade to start getting married, but is having children, albeit later in life:

We know that throughout the 1980s and 90s women in the twenties were having fewer babies than previously while women in their late thirties saw a moderate rise in fertility rates. In 2001 something changed. 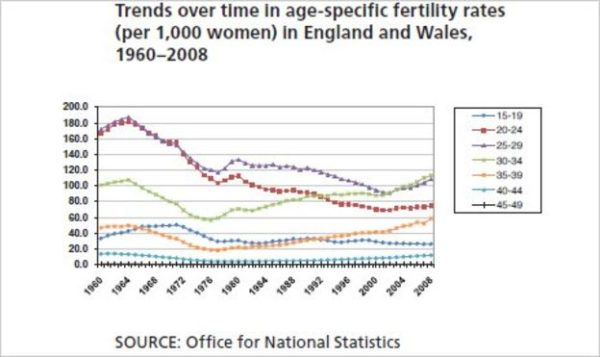 The story of this graph is the purple line – women aged between 25 and 29. Fertility rates had been falling inexorably since 1980 and then in 2001 the trend reverses. It is almost as if women in their late twenties realised the thirty-somethings were overtaking them in the baby-stakes and decided to get breeding.

While the experts are uncertain as to the cause, it seems most likely that this represents people dodging the insane “dating” scene and finding people with whom they can have a family instead of engaging in the sex carousel. In other words, those who followed the 1960s model are getting bred out, while those who stuck to a modified traditional approach are experiencing reproductive success. These waited around until the dust had settled, got married and started having children in their thirties and beyond.

As in all problems with the West, when we remove the toxic brew of individualism/Leftism/equality from the equation and focus on what actually works, we achieve powerful results.

98.6% Of People Correctly Identify Their Biological Race | Examining The Carnage Of The Sexual Revolution