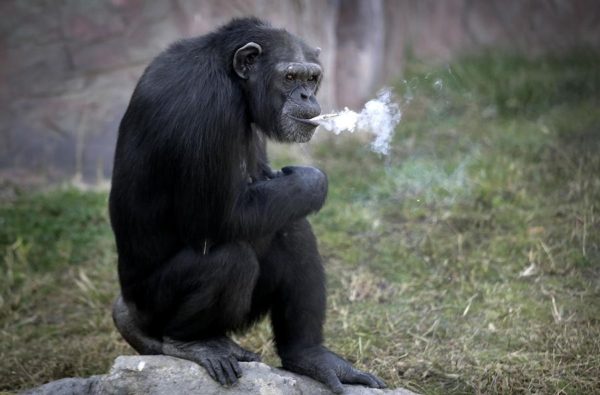 This afternoon like those of many other Americans my path took me to the local voting booth. We all stood in a long line that bent around the building and snaked into the parking lot. As the line lurched forward in tiny increments, most people stared at their phones, flipping through social media.

Only a few people seemed aware of their surroundings. The rest were aware of the back of the person directly in front of them, and maybe the cell phone. This made it easy to divide the people there into two groups.

The first group were the self-expression types. These were visually identifiable as “different” from my tribe and my people. One was a white guy in his fifties with his hair dyed blue. Another was a man wearing a shirt made of wide bands of the rainbow colors who walked along the line filming everyone while talking to his vlog audience about the size of the crowd.

A woman in her thirties, arms both covered in tattoos, wore a denim jacket with a patch saying U.S.M.C. DAUGHTERS ON BIKES. She was talking to a young Hispanic woman who kept her arms folded. Minorities and white people did not interact much other than this. People carried themselves with a type of provocative aggression, white and otherwise, as if to dare someone to challenge them. Regrettably it did not happen.

Several young women had come over from their jobs. They wore pantsuits and had expensive purses. It looked like their jobs did not involve moving around much. They were visibly nervous, and kept checking their smartphones to see what time it was, even though time was moving so slowly for most of us that it felt like days. They wanted us to see that they were important, and here on a sacrificial mission.

Someone from the group that administrates the elections came out to explain what an ID card is. There were signs in English, Spanish, and Vietnamese but according to her, many people still got to the front of the line only to find that they did not have their IDs or brought the wrong type.

The second group comprised people who were there from a sense of duty. The elderly were most visible, moving slowly but with purpose. Businessmen in suits looked out of place but grimly defiant in the way people are when waiting in line holds up events of actual importance.

This group, which seemed to be about a fifth of the total, are what normal white people think of as normal white people. The faces were German, English and related groups; they were not as ostentatiously dressed as the self-expression crowd, but were dressed simply yet professionally. Most did not bother to check their phones all that much, only too aware of the passage of time.

It was striking how small this group was compared to the self-expression group. The larger group wore more bright clothing, paid more attention to their appearance, and were more active in line, as if on a social outing. For them, their vote was a method of showing something about themselves, like moral goodness or simply standing up to the rest of society with a bold provocation.

If the 20% of people there who had purpose had alone survived and the rest perished, no deleterious effects would ensue. In fact, one might arrive at America before the decay: hardy, purposeful people who have no time to waste on the pretense of self-expression.

This led to meditations on the psychology of voting.

Even among smart people, voting reduces human intelligence to the level of a tabloid. Voting is the opposite of making a decision; it is closer to placing a bet, or playing the lottery. One makes a choice and then something happens to it which has no relation to how correct or realistic it is, so it is mentally destructive to place too much importance on the result.

In addition, voting ends the obligation to interact with the process after the vote. It is like tossing out a comment at the end of the party, then leaving; there is no investment in seeing it through to conclusion. Then, since the process has completed, the tendency is to turn off the mind until the next election.

In our minds, voting also teaches us to rely on the herd both for guidance and as a means of absorbing our errors. When voting, one wants to pick a winning answer, or something that other people like. This makes the question of what is right a distant second. Then, there is the thought that since each individual vote matters little, since only what most people like matters, it is not a serious decision. The group absorbs anomalies, good or bad.

Finally, voting enforces externalization of cost as a model. We are told to vote for what we want, and the group will support it if enough people like the idea. This means that we have no personal cost except for a tiny sliver of the impact, and we are encouraged to pass along costs to those with more wealth than we have.

This creates the mentality of a committee. Instead of making a choice based on the best option, the group chooses by what each member thinks the group will support. Reality is no longer the measure of our decisions; we are the measurement we apply to reality. This is backward thinking.

The end result of all of this is a cult/gang mentality. Society splinters into groups, and each group tries to use the weight of the vote to destroy its opposition. This is like a group of people in a car fighting over who gets to drive and no one is watching the road because to do so is to weaken their attack and defense against others.

With democracy, every gesture is a token or a symbol. None are designed to have effects in reality because they are focused on the system of voting which serves as a proxy or intermediary substitute for reality. We are not making choices, but manipulating each other. It is not surprising the results are so bad.

The early voting process passed relatively smoothly. The smugness of the people involved was hard to tolerate: the self-expression crowd felt like they were beating back some mythological enemy, while the duty-bound seemed grimly determined to participate in something in which their faces revealed a lack of faith.

As the years of liberal democracy fade — it has as surely died in 2016 as Communism did in 1991 — the thoughts that come to mind are not of the disaster of democracy itself, but the psychological effects it has had on us. People are timid, angry and devoid of the self-reliance that once made our nations great.

Someone tell me: where can I vote to end democracy?