If it’s unpopular and makes us uncomfortable or inconvenienced, it isn’t going to fly. So, we form a colossal crowd of equal voices to assert antireality against truths that are difficult to accept. 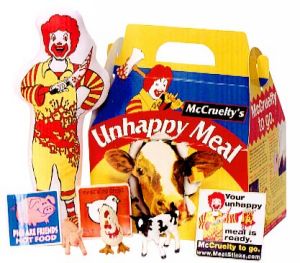 The truth? Industrial scale farming and food processing relies on cost cutting to keep ahead of competition.

But the crowd’s goal is to convenience its members, not to improve them. It wants to quickly appease its demanding kids so it can move on to more important things in life like sofa time with Oprah.

“Unhappy Meals” featuring a knife-wielding Ronald McDonald and bloody rubber chickens are upsetting parents who say the People for the Ethical Treatment of Animals are unfairly targeting their kids at McDonald’s restaurants across the country.

PETA’s “McCruelty Campaign” has ruffled the feathers of moms and dads in Albany who say they don’t want their kids exposed to any throat-slitting chickens or pictures of slaughtered poultry.

“I don’t want my son to be around something like this. This is not fair for a child,” Stephaine Gipson told FOX23 News in Albany.

But the animal rights activists say kids are jaded enough by television and video games to handle the carnographic images, and intend to continue their campaign pressuring McDonald’s to use more humane means of killing chickens.

“I think children and adults deserve to be told the truth â€” and that’s that behind Ronald McDonald’s smile is cruelty to animals,” said PETA spokeswoman Lindsay Rajt.

Social reality isn’t anything unique, or particularly American. It is an effect of post-revolutionary civilization and always a major cause of its fall. In Soviet Russia, pravda was the public desire for how things ought to be. Its counterpart istina means how things actually are.

The idea was to insert pravda like equality and prosperity into public life using legislated correctness and broadcast propaganda. The hope was that by doing so, somehow reality would change. People came to accept this idea was a fraud because nothing was getting better through wishful thinking alone. They stopped playing along with the Soviet system, even mocked its pravda, and eventually the USSR came to an end.

As any Russian-speaker knows, N. K. Mikhailovsky is correct about the etymology of “pravda.” It is closely related to such words as “pravyj” (“correct”), “pravo” (“right”, “law”), “pravilo” (“rule”), spravedlivost’ (“justice”), etc.
“Istina,” the other common word for “truth,” is related to “istinnyj” (“genuine”). 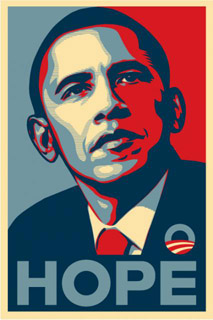 In America, pravda, or social reality is not state enforced as with the Soviets, but rather state protected by a concept called freedom. When given a choice, the bottom majority of humanity chooses comfort more often than improvement.

Freedom allows overwhelming crowds to vote uncomfortable truth out of office, to move away from it, to form angry protests against it, to buy more cheap products and avoid having fewer quality alternatives. This is more effective than brute coersion because it appeals to our complacency, our desire to keep the peace and not rock the boat.

We avoid adding any more cumbersome obligations to already busy lives or to thoughts buried by daily information overload. In this way, our own state of disorganization corrupts our personal liberty into a force for destruction.

To paraphrase political scientist Tomislav Sunic, the Soviet system vanished because its goals were better implemented by Americans.

Climate change puts spotlight on overpopulation | Welcome to The Fall