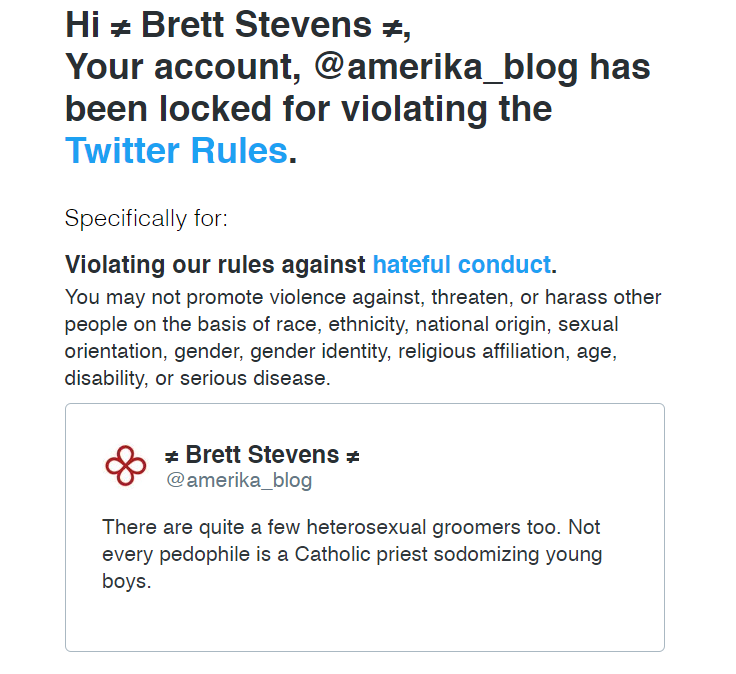 At least we know what the censorious little widgets banned me for. In the long term view, social media means your stuff stored on someone else’s computer, which means that whatever $8/hour equivalent losers they hire to police the feed will get on a power trip just like inbred Appalachian cops or Russian mercenaries and take out their life failure on you.

Our goal is simple: restore Western Civilization. The modern brew of democracy, inclusion, equality, diversity, and socialism/entitlements has failed.

The usual Leftist tactic works: mass report something with a wave of complaints and the former fast food workers now in charge of censorship — no one will take this job unless they have no other option — will remove it simply to stop it from creating more work for them with each new complaint.

The tweet above, by the way, was a canary; it was the pinned tweet I use on all social media platforms. It offends people because it bluntly tells us what must be done in order to have a functional civilization, and as narcs most of them realize that this will impede their own bad behavior.

On sites which allow more than the tiny messages that Twitter permits, you can see the second half:

* Economics in One Lesson, by Henry Hazlitt
* The Republic, by Plato
* Democracy: The God That Failed, by Hans-Hermann Hoppe
* Men Among The Ruins, by Julius Evola

Apparently the original message was offensive enough that it was removed in Germany for being, as the email from Twitter to me said, controversial:

In accordance with applicable law and our policies, Twitter is now withholding the reported content in Germany, specifically for sections of German law related to hate speech or unconstitutional content, §§ 86, 86a 130 StGB.

Funnily enough, the Leftists are waging their attack across the board. One of our domains was recently reported to the European Union Internet Referral Unit (they encourage citizens to report “hate speech”), which promptly harassed our registrar into removing the domain. This occurred because they found a justification in the use of buzzwords:

In our assessment, the website corrupt.org offers an archive of known terrorist content online in the form of live stream videos of terrorist attacks, terrorist perpetrator manifestos, and other supporting materials. The associated IP and registration data for this site may be of interest to law enforcement. We appreciate your assistance in this matter. Kind regards, EU IRU

They are most likely talking about the archive of manifestos and videos. Apparently our pretentious, reality-avoidant democratic society would rather ignore the causes of the problem and try to ban guns, video games, and free speech than address the reasons for the dissatisfaction.

As others have noted, this is a common tactic by Europol because it enables them to conduct censorship without using the organ of the state. Make enough noise, create enough problems, and instill fear in those who register, host, and provide services or ads to a website, and you can make it go away without admitting that this is soft totalitarianism:

Europol takes pains to emphasize that the final decision to remove content is a voluntary activity carried out by the concerned service providers, in accordance with their own terms and conditions. But in reality, these seemingly voluntary requests occur within the broader context of coercive pressures on ICT companies to “do more,” as mentioned above.

If you wonder why every big tech company wants to force you to use your phone number, use HTTPS/SSL, hire third party services as mailers so they manage DKIM records, and host your data in “the cloud,” this is why: they have the same control over you that way that Twitter has over its users.

Ah, now it all makes sense: 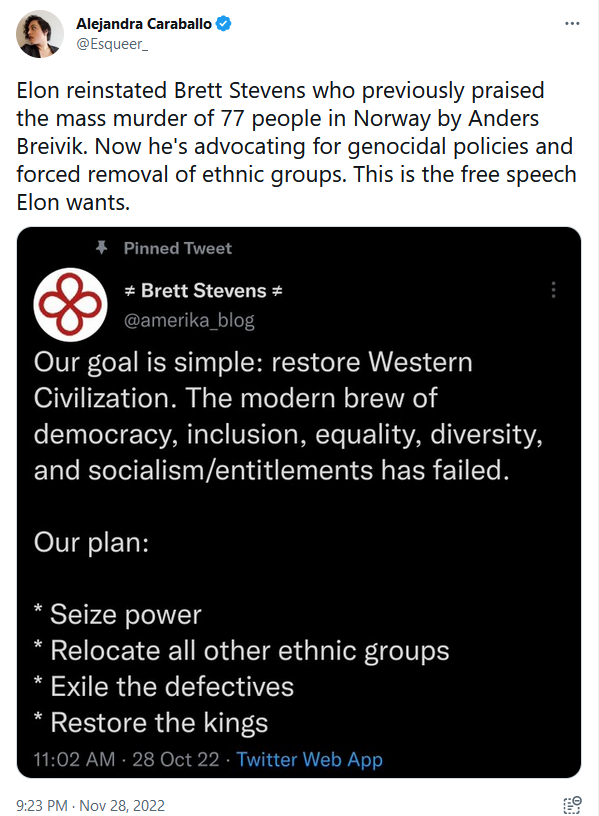 If Democracy Is “Freedom,” Why Are We Still Banning Books? | LTE to The Guardian Regarding Free Speech on Twitter