by Jonathan Peter Wilkinson on April 6, 2016 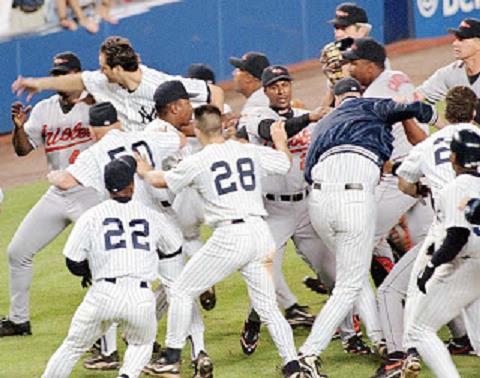 So letâ€™s say an individual is a man of great honor. He is a celebrated athlete who honors his sport and competes in accordance with all of the written rules of the sport except when he seeks professional advantage. When whistled for a foul, he accepts it with stoic dignity. More importantly, the great athlete obeys an unwritten code of competitive honor. There is a right and a wrong way to play the game. This is true in baseball, but it is also true in life. And when people who donâ€™t understand the cultural context in operation offend the unwritten codes of cultural dignity, mayhem breaks out. We see three examples below.

The traditional, unwritten rule being not to humiliate your opposition. The batter above did so by watching his home run and slow-walking his home run trot against the Braves. His show-off attitude infuriates Braves Catcher Brian McCann who stands on the baseline and wonâ€™t let him touch the base.
In the video below, the same player, Carlos Gomez shows off again. Once again, breaking the cultural taboo against pointlessly humiliating an opponent. Once again, fists get thrown.

In our final brawl is in The World Baseball Classic. We see Canada bunt for a hit when they already had a six run lead on Mexico in the final inning. To the casual observer (and to the ignorant announcers youâ€™ll see below) it seems egregious to hit the next batter with a pitch. But no, in baseball, deliberately scoring on a routed opponent to run up cheap statistics is a cultural foul. Another taboo we see violated is the secondary brawling. Baseball fights are supposed to be mano-a-mano affairs. The hitter decked by a hard pitch gets a few shots at the pitcher if the catcher fails to make a good tackle. The pitcher and hitter both go take an early shower. Others are entitled to insult the other teamsâ€™ familial pedigree to their heartsâ€™ content. But they are not supposed to ever be the third man in. Then the fit hits the shan as we see below.

So we come to the end of our athletic-themed episode of The Jerry Springer Show. Itâ€™s the part where Jerry asks the vital question. â€œWhat can we learn from this experience?â€
What we can learn is that any sort of culture or sub-culture will have a complex set of unwritten rules known as tradition. When we introduce people who donâ€™t understand or donâ€™t personally accept these traditions conflict will occur as soon as these unwritten rules are flaunted. The more non-traditional elements that are introduced to a culture, the more these rules will be flaunted or ignored. The warrior traditionalist will not tolerate this.
In the confined and regulated environment of an athletic filed, a few fists fly, a few idiots walk home with lightened wallets and blackened names. Nothing worse occurs and life goes on the next time itâ€™s time to suit up and play ball. In the streets, this sort of thing leaves someone, somewhere laying down for the dirt nap. Diversity plus proximity equals violence.