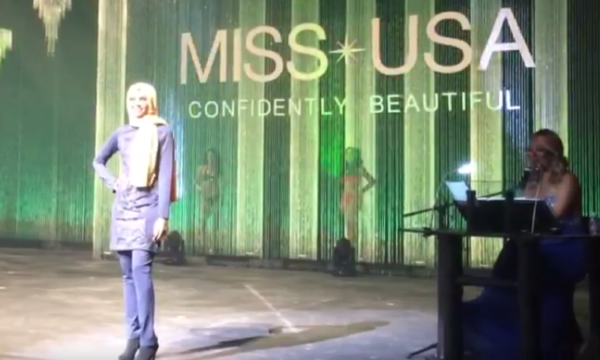 One of the hardest tasks for me was realizing that conservatism is fact-proven living, where Leftism is entirely conjectural.

This means that Leftists are opposed to facts and logical facts which invalidate Leftist thinking, which in turn means they cherry-pick every field of facts to find only what is convenient for advancing their narrative, or the story of how their conjecture leads to Utopia.

From that, we can see how our press and all Leftist politicians are essentially liars. To them, reality denial is the only good, because it leads to equality, which is “progress” toward Utopia.

As a result, they have developed a number of tropes that we refer to as “Typical Leftist Behavior” or TLB.

One of these can be seen in the recent triviality of a teenager entering a beauty contest wearing a burkini, a type of bathing suit/burka fusion that seems to offend both cultures.

As the neurotic Leftist press opines:

The 19-year-old St Cloud college student was born in a refugee camp in Kenya, which borders Somalia, and moved Minnesota as a young child.

A burkini is a full-body wetsuit that covers the torso, limbs and head and is worn by some Muslim women. The garment became the centre of a controversial debate in France earlier this year, after officials in at least six towns on the Mediterranean coast banned women from wearing it on beaches.

The idea of “she’s making history tonight” — announced by a white woman to the right of the burkini-clad teen in the photo — is to introduce political symbolism as history, which is standard TLB that consists of erasing and rewriting history to make Leftist seem like it has some logical basis instead of being purely a message of human intent and self-image.

She wore a different swimsuit in a beauty contest. The only “history” made is that she is forcing her political agenda on others. Otherwise, we see this for what it is: someone wearing a different cut of swimsuit.

Outside of political symbolism, framed here in the “girl power” narrative of defying stereotypes, there is no news here, but the press reports it as if she swam to the moon.

This is how insanity destroys human civilizations. It makes itself socially popular by crushing those who do not see it as important, and then when it takes over, it places unrealistic rules and incompetent people in charge, which makes life miserable and drives away the sane, competent and morally good.

Then the civilization implodes to a third world state, committing suicide through pretense. And since this is the most common way that civilizations exit, it is hardly “making history tonight” either.

As The Idols Fall: The Future Of Dark Matter, Climate Change and Racial Equality | From The Neoreaction Conference In London