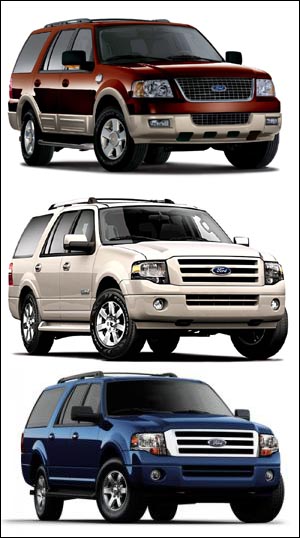 Political symbolism strikes chaotically, like a form of lightning that lifts objects up from earth, makes them represent an issue that divides us, and then form a part of our vocabulary.

In the future we will see a political symbol that will be like the humble SUV. For those of you who live in caves, an SUV is a “sport utility vehicle” which is a politically convenient term for a truck with its bed enclosed and doors added so it can be a consumer-level vehicle.

SUVs are divisive because they are not necessary in the strictest sense of the word. While putting your loved ones in a tank is tempting as a precaution against injury or death in a collision, SUVs eat up fuel and intimidate smaller cars on the road. In addition, they’re hard to drive, and by definition the most vulnerable drivers are often the least road-savvy, meaning that many SUV drivers are the least likely to be able to handle the cumbersome monsters.

Among those on the right, SUVs divide us between two principles:

You can see immediately why this is divisive: the right is a “big tent,” or broad spectrum of political views, in which most believe government intervention is the least desirable outcome, and in which many believe in absolute individual liberty.

Depending on what you believe, you will come down harder on one of the two sides. There are truths to both.

Those who prioritize environmental issues above all else will come down hard on the consequentialist side, presuming that they agree the damage done by SUVs is significant. The idea that SUV damage is significant may be an illusion; cargo ships eat more fuel, and manufacturing of smaller consumer goods that are more widely sold, including disposables like plastic water bottles, may consume more resources and produce more pollution. Barring those two possibilities, our inclination is to say that since SUVs are not necessary, and they do create excess of resource consumption and pollution, it’s fair to limit them.

But this divides the right against itself, because for each tree-hugging crunchy conservative, there’s a libertarian or paleoconservative who believes that freedom as defined in the Constitution should be absolute and we should not limit it if at all possible. Further, they add, if we go down that slippery slope, soon we’ll have to ban other things, like disposable water bottles, until we get to a ludicrous society where you cannot own a disposable lighter and must recycle toilet paper with a hand-cranked device made out of bamboo and clay.

The SUV is as mentioned above merely a political symbol. That means there are many other conflicts like this, and each has significant validity to both sides. But the right limits itself by not taking a clear ideological stand on the issue which these symbols reference. Do we want pure individual liberty, or does consequentialism come first?

In my mind, with the convergence of disasters created by the industrial revolution and the rapid expansion of both human population and the demands of individuals, conservatism is about to tend toward the consequentialist side. It does not right now because pointing out how the left wants a “soft Soviet” style Nanny State — and have created one, with welfare and political correctness and a host of other ill-advised programs — is such great political ammunition. Thinking past the next election cycle however, we see how this issue won’t go away, and trying to avoid it makes us look like fools.

The idea of “liberty” as in libertarianism and classical liberalism is itself an outgrowth of the liberal intellectual revolution that rocked Europe before the American colonies were founded. When Protestantism fractured the Catholic church, and kings were made to serve parliaments, liberalism became a value in Europe so pervasive that most European states are heavily socialistic even today. However, socialism destroys the power of nations by spreading its wealth inclusively, preventing it from being concentrated and applied to more wealth, and even worse throws out quality of population as a consideration. Equality, liberty and fraternity are liberal values, not conservative ones.

On the other hand, conservatives conserve. This is why we and not the left should be taking the lead in environmental issues. Our goal is not to promote individual equality, because we know that’s at odds with nature and common sense, but to conserve social institutions, culture and lands. Such a viewpoint is necessarily consequentialist because we have a goal; the liberal goal, defense of individual equality, is more of a reaction that an attainable goal for which they strive. To make it into a goal presupposes a Utopia so idealistic that we can only compare it to blindly devotional religious sects and Communism. If we are consequentialists, and we conserve things including the environment, we cannot take ourselves seriously if we think any action that has unnecessary long-term consequences should be tolerated.

Of course, that viewpoint is unpopular. Most people are unaware of the scope of the issue and so detest any legislation that limits what they possibly can do. They feel this way for the same reason that they buy lottery tickets: even if they don’t intend to buy an SUV, they feel really good that they could rush out and get one if the whim hit them. There’s a sense of power and “freedom” in that, even if it has no basis in likely reality.

However, as these modern long-term disasters converge and we find ourselves facing a world of less wealth, with more instability and nuclear proliferation, in addition to environmental consequences caused by our expansion to all but a few areas of earth, conservatives are going to find themselves facing this political question again: individualism or consequentialism? Pick the first, and you drift steadily toward liberalism and lose what makes your side distinct. Pick the latter and you can no longer promise “liberty” to everyone while ignoring the destructive consequences of their actions.

Perhaps we should just be honest with ourselves and consider consequentialism to be a form of maturity, meaning that we’ve left behind the reactionary demand for absolute individual equality, freedom/liberty and consumerist-style purchasing free will. In doing so, we would be sacrificing a host of symbols that have proven themselves empty, and instead, begun the process of in earnest conserving our world and enabling ourselves to make goal-oriented decisions again.

Gender roles: adaptivity, not control | Moving away from the subsidy model