The Summer of Boredom 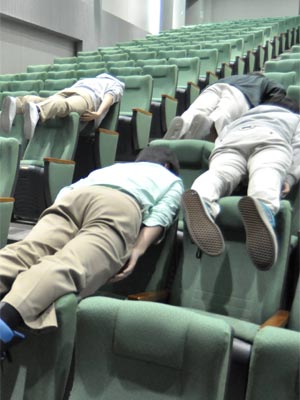 “The Summer of Love” provides an aptly conflictedÂ symbolÂ for the entire late 60s counter-culture.

We often forget (or perhaps never even knew) that the same summer had a dark side: it is also called “The Long Hot Summer” because of the violence and riots seen in various US cities not named San Francisco.Â

To astute observers, it’s no surprise “The Summer of Love” ended with a death in the Winter:Â Wherever hedonism goes, permissiveness ensures that violence is not far behind and vice versa.Â It’s as if they are palliatives for each other, a form of what the Greeks called hubris and nemesis.

Consequently, it’s not surprising when a lunatic like Mark David Chapman kills a debauched artist like John Lennon. Or that theÂ Zodiac Killer (one of the most “colorful” and intelligent serial killers of all time)Â first became active during 1968-1969 in Northern California.

When they threw out the social order, it wasn’t just peace and love that came scuttling out of the wallboards like so many cockroaches.

Although probably meticulously planned and promoted, The Summer of Love and Woodstock at leastÂ seem spontaneous to us in retrospect.Â  Or more specifically, it seems spontaneous to those of us born after the fact, and who only know it asÂ the three hour documentary Woodstock.Â Today, spontaneity almost seems impossible.Â Is it any surprise that “Woodstock II” was cooked up in the 90s? Our revisionist history demands we impose order on an unruly time.

The Summer of Love, which should rightfully be called The Summer of Reckless Hedonism,Â continues toÂ iterate itselfÂ as a sort ofÂ Summer of Sophisticated Hedonism (sophisticated compared to wallowing around in the mud in up-state New York) for the next five decades.Â

And so here we are in 2011, Osama bin Laden is dead, and we gear up for another summer.Â Ancient peoples and traditional cultures marked these occasions with celebrations, sacrifices, harvests, and festivals.Â  This urge is still within us.Â But today the passage of the seasons are media events and you are told how you will celebrate and how you will sacrifice.

After the Cold War, throughout the 90s, “events were on strike,” according to Jean Baudrillard.Â With the Cold War (an extension of WWII, an extension itself of WWI, or endless war since 1914) gone, nothing was truly at stake for Man.Â Liberal democracy triumphed unequivocally.Â And along with it, an ideology of consumption, status, leisure, comfort, and safety triumphed.Â This is Fukuyama’s End of History.

Although no one expected Osama bin Laden to be captured and killed on that exact day, the entire event reeked of artifice. One might be quick to chastise the hubris and bloodthirsty nature of the celebration.Â  But in a more traditional society, when the symbolic mortal enemy of an entire nation is captured and killed, one would almost expect more celebration and chest thumping.

Osama bin Laden’s death was the symbolic violence-as-palliative necessary to justify our upcoming Summer of Sophisticated Hedonism.Â The message:Â  get out there and go on vacations, go to the ballpark (and spend $300), go to your regional, scaled-down iterations of Woodstock, $5 a gallon for gas?Â  So what!?Â  Osama bin Laden is out of theÂ Middle East now.Â Gas will go down eventually and it will all even out.

WhatÂ we need is a Summer of Boredom.Â  A life is really sustained, not by working your fingers to the bone or by letting it all hang out on the weekend, but by how one deals with the moments of boredom in between the events we remember.Â

Boredom is, itself, not necessarily an end goal, but at least it will give us the space necessary to get some serious thinking done.Â  No TV, no drinking and partying, no vacations, no weddings, no baseball games.Â  Most people probably think boredom is almost “exotic” by now, and exotic sells.

Think about it:Â  how do you want your officialÂ Summer Calendar to look?Â  All filled up with plans on every weekend? Â (And weekends start on Thursday now, by the way).Â  Or a big, wide open three-monthÂ frontier waiting to be explored and conquered?

Boredom offers a mysterious new experience. We should make Summer 2011 the official “Summer of Boredom.” Fun is on strike; it’s time to rediscover life instead!