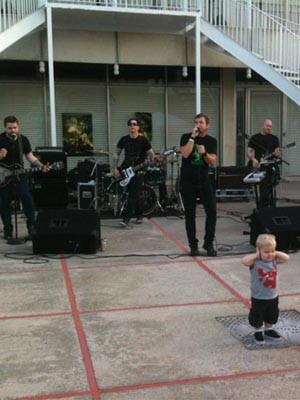 Prole drift is the universal tendency of human beings to please their social group by being inclusive.

Who needs including? Those who did not distinguish themselves. Thus prole drift is always a drift downward toward the lowest: lowest intelligence, moral character, health, wealth, political/social power and physical beauty.

This means that society changes from wanting to rise above the rest to settling down into what the lowest among them desire.

Since intelligence and moral character are on that list of lower traits, you can tell this means something dumber, more venal, more permissive and less disciplined. In other words, a reversal of evolution and failure to ascend.

For example, let’s look at the blue jean — a fashion statement from 1960s through 1990s, now more like a people’s uniform:

â€˜Denimâ€™ is probably a corruption of the French serge de NÃ®mes, a twill-weave fabric made in NÃ®mes during the 17th century. Another European fabric â€“ a â€˜fustianâ€™ made from a cotton, linen and/or wool blend â€“ was known as â€˜jeanâ€™ after the sailors of Genoa, Italy, who wore it. By the 18th century, as slave labour, trade and cotton plantations developed, jean cloth was being made entirely of cotton and was valued for its durability. Indigo blue, extracted from plants in the Americas and India, became a familiar colour for workwear.

Immigrant weavers from Yorkshire, England, produced heavy cotton fustians â€“ cotton-twill jeans â€“ from a cloth mill in Massachusetts as early as 1638. In 1789 George Washington toured a mill in Massachusetts that was weaving both denim and jean. By 1849 a New York manufacturer was advertising topcoats, vests and short jackets in blue jean. Mechanics and painters were wearing overalls made of blue denim; others wore more tailored trousers made of jean. – The New Internationalist

What happened to that clothing of the laborer in the United States?

The worker took it to a gold rush:

1873: Blue jeans assume their distinctive form when a patent is issued for the rivet process used to strengthen the pockets on what were then called â€œwaist overalls.â€

Jacob Youphes, a Latvian immigrant who changed his name to Jacob Davis (.pdf) after coming to the United States in 1854, was working as a tailor in Reno, Nevada, when he hit on the idea of using copper rivets to reinforce denim working pants (.pdf). Since he obtained his denim from Levi Strauss & Co. in San Francisco, Davis approached Strauss with an offer to file for a joint patent.

Strauss â€” knowing a good thing when he saw it â€” accepted, and the modern â€œblue jeanâ€ was born. – Wired

Nowadays, jeans are not a status symbol but a humility symbol.

In the 1980s, designer jeans proliferated, and were the most sought Western item in closed societies like Soviet Russia. When Communism fell, the price of an AK-47 or Soviet military uniform was a pair of American jeans.

Through the 1990s, jeans remained a symbol of hipness. If you wanted a character to seem down to earth and fun in a movie, for example, you put her in jeans.

During the 1990s, jeans changed. The politicians began wearing them to every barbecue and “meet the proles” political event. Seeing the people who made jeans hip in the 1960s turn them into a symbol of establishment compliance in the 1990s killed the buzz.

Now, jeans are just part of the uniform. If you wear them, you’re normal. If not, you better belong to some kind of subculture — goth, hip-hop, etc. — or you’re just weird.

Prole drift has changed our clothing from a desire to look elegant to a desire to fade into the background, lest the crowd notice you’re not exactly like them.

A teenager I know is a student at one of the fanciest prep schools in the country. He recently attended his senior prom. No expense was spared for the event, which was held in a major football stadium. (A father of a student owns the team that uses the stadium.) Limos were rented. Girls agonized over their gowns. Corsages were purchased. Pre-prom and pre-pre-pre-prom parties were held.

What, you might wonder, was served to eat at this first formal occasion for these excited students? Pizza. The students stood around in their formal attire eating pizza.

The pizza-fication of America proceeds apace. It is only a matter of time before pizza is served at all state dinners and banquets. Pizza is to modern cuisine what socialism is to political life. It represents the leveling of aspiration. It is the only significant consequence of radical democracy that Alexis de Tocqueville failed to predict. Pizza is the denim of dining. It even tastes like blue jeans. Pizza is the anti-soul food. – The Thinking Housewife

Why bother thinking at all? No more wasting time on menus. The proles want pizza; give them pizza! It pleases everyone, or at least the statistical average, which means that no one can complain. Lowest common denominator achieved, soul sold to pander to the assembled multitudes, and we’re popular again.

Pizza is barely even an Italian food, much less an American method of making it easier to produce fast food. No complicated bread here; just a simple dough, blasted in a high-heat oven. Get rid of those complicated calories and double up on the carbs and fat.

It’s no wonder our society hates itself. It has replaced every sense of grace, aspiration and hope with a desire to fit in and be just one of the proles. This is why prole drift carries such a heavy weight of entropy and, to the erudite observer, presages the Fall.

Discomfort | The Summer of Boredom