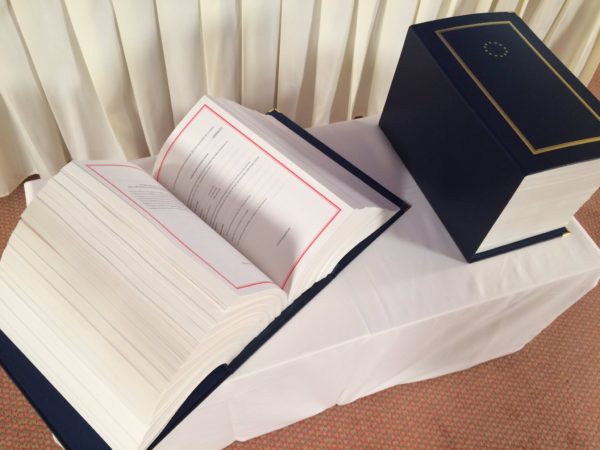 A person doing a science job fills out a series of forms concordant with the appropriate regulations to request allocation of government resources to a proposed study. Â The forms go through the bureaucracy, moving from one office to another, eat ink to propel themselves and mature enough to watch the fresh new forms theyâ€™ve spawned move on through their own approval processes.

The rubber stamps are collected, the study is approved, and begins. Â More people doing science jobs are recruited or reassigned, and the government resources are channeled into the subcontractors and lowest bidders. Â Science papers written by other science-doing people are read. Â After an acceptable duration of extensions past the deadline, a new science paper has been created by this set of science-doing people.

A press release is sent out, and a hundred news articles are excreted from the appropriate templates making the same recommendation that resulted from the study in appropriately different words. Â The conclusion of this highly structured time and effort is this: you, person in the general public, should not clean your ears with q-tips because you might press too hard and damage your ears.

This is not fiction, not a contrived example — this happened. Â And this type of thing happens often, every day, all around us.

The subreal is the hyper-mundane minutiae with which the modern world forcefully confronts us. Â It hits us with a sense of wondering confusion similar to the surreal, but instead of being fantastical, instead of having a feel of being far-fetched and bizarre, itâ€™s the opposite — itâ€™s banal, so shockingly unremarkable and un-nuanced. Â The painfully unimportant things that are treated so seriously and carefully. Â The contradiction between being so outrageous, yet simultaneously so unworthy of outrage, beats us down psychologically and induces a passive apathy.

We are being forced to have public discussions on whether someone should have a legal right to choose their pronouns. Â Who wants to care about this?! Â What possible response to this makes any sense but ridicule? Â And yet, academics must put significant intellectual effort into its refutation, lest it grow and metastasize unchecked. Â This feels like it canâ€™t be real.

Itâ€™s the routinization and systematization of that which could be done without conscious thought, like a mandatory corporate seminar that provides an acronym of steps on how not to sexually assault coworkers. Â This puts the nuanced, organic experience of social interaction onto rails that apply a coarse legalistic set of rules to allowable behaviors, as if programming a robot. Â Maintain at least 0.8 meters separation between coworkers. Â Do not comment on physical appearance. Â Do not touch each other, unless only the palms of the hand touch in an allowed way. Â Disable all reproductive subroutines.

Itâ€™s a society whose culture consists of the lowest common denominator of human experience–propaganda that somehow seems to manage to inject synthetic hormones for sentimentality into the naked facts that: we all eat, we all have positive feelings for our children, we all donâ€™t want to die — and further, that this deflated one-size-fits all husk of a culture is celebrated.

Itâ€™s an environment where the most popular forms of socializing revolve around groups who merely like a manufactured and mass-replicated entertainment product. Â Satisfy your need for human interaction by repeating phrases from the product, or relating your excitement at an aspect of the product. Â This will not be difficult, you may simply choose an aspect that is present in every incarnation in the genre: mutual agreement with your co-humans can be found in relating the satisfaction from seeing the oppressed character righteously pummel the ultimate oppressor who has no motivation but irrational hate, or in the saccharine pleasure of the invariantly repeated melody. Â Everyone you meet will do the same, and so you will feel accepted.

Where an entire life can be lived without experiencing any semblance of a noble action requiring courage, loyalty, or honor. Â The phrase â€œso braveâ€ is more likely to be uttered with derisive irony than genuine praise, and the phrase â€œI love youâ€ is made routine and has the sincerity of corporate marketing. Â Popular ethics is composed of Kindergarten teacher admonishments: be nice, donâ€™t hit, and donâ€™t you think you should share?

Itâ€™s a mechanized life, scheduled down to the minute, of not really doing things, but being places chosen from an approved menu of options. Â A job? Â Choose one from the classifieds. Â A career? Â Choose a program from a school. Â Show up at this time, then leave at that time. Â At night, return to your shelter, chosen from the options offered by your realtor. Â Companionship? Â This app gives you several options that have been determined to match by an algorithm whose inputs include your choices of entertainment products. Â Weâ€™ll make sure that if you are a person who watched and liked Star Wars you wonâ€™t have to talk to a person who watched and liked the New York Mets. Â We understand youâ€™re not a person like that. Â Itâ€™s important!

Go on an adventure, buy yourself a motorcycle. Â But you must also buy and wear one of these Department of Transportation approved helmets, and you must not leave your boot laces tied too long. Â This is for your safety, and if you donâ€™t do so you may receive a printed piece of paper designed to enforce the regulatory details resulting from decades of revised legislation which means that you must pay the government the amount that legislators have agreed will make the general public safer. Â Once you meet all the regulations you may have fun on your approved exciting adventure.

What are you? Â You are a clump of cells which are clumps of atoms. Â Where are you? Â You are on an insignificant pale blue dot lost somewhere in the incomprehensibly vast emptiness. Â Why? Â As experts in the mundane, we can confidently assure you that none of this means anything. Â There is no forest, only a clump of trees.

When the vitality, the idiosyncrasies, and meaning has been sucked out of life, what is left is the subreal.

In this environment, being real is radical. Â Sanity is not an extreme, itâ€™s sandwiched between the surreal and the subreal. Â Itâ€™s a sum thatâ€™s more than itâ€™s parts. Â Itâ€™s fitting details into a larger coherent context. Â Itâ€™s an acknowledgement that rigid, explicit rules miss important exceptions and are often an avoidance of a solution.

What is real is honesty, identity, courage, loyalty, virtue, responsibility, and much more than words or abstractions can capture. Â The system produced by the subreal is like a ship with only a maintenance crew and no captain: the handrails are cleaned daily and the engine operates within the specified parameters, but none have awareness beyond their assigned tasks. Â When this system inevitably finds itself in stormy waters, those of us with souls will find joy in the richer, fuller experience of life that will arise.