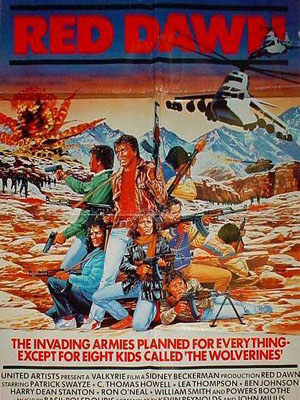 When a society agrees on its values, it doesn’t need elections. It only needs to pick from its leaders those that exemplify those values the best, and to push them forward. Decaying societies are decaying because they have lost a sense of those values and thus are torn apart by internal disagreement. The right-wing is generally the party of eliminating internal disagreement, while the left-wing is the party of celebrating it because when society is weak, the individual is strong.

Currently the industrialized West is in its Late era. This is not a prophecy of doom; at any moment, if the will is found, the West can pull out of this tailspin. However, in the meantime there are wolves at the door who wish to dominate us, consume what we have, and then destroy us so that we no longer challenge their absolute control over their territory and those surrounding it.

In this we can see how RealPolitik on the international scale is a lot like prison ethics. If anyone near you is strong enough to fight you, they will. As long as you are average, you are unlikely to be fought. If you rise above, you are both a threat and a challenge, since others will rise above by beating you. If you fail to be a threat, you become a liability in that having to be obedient to you and your needs, in turn, holds others back. Thus to be more than average is to be forever vigilant.

While pax Americana has had its problems, almost all of these can be attributed to the fickle, individualistic and thus self-serving nature of democracies. When American democracy was in the hands of a few enlightened land-owning wealthy white men, it was an aggressive and intelligent creature. Once they handed the vote to anyone over age 18 who could demonstrate a pulse, politics went from being a serious matter to being a popularity contest in which people clamor for freebies and bennies and deny the consequences will ever come home to roost. It’s fair to say that early American “democracy” was more of a thinly-spread oligarchy than democracy in the Athenian sense.

The Americans face a number of people who want them dead. The Canadians are at the top of this list, but are ineffectual militarily. Mexico might also want in but is similarly unlikely. The real threats come from China and its long-time ally, Russia. China has in fact been maneuvering to find new allies, such as Pakistan, so that it can counter American power worldwide. China’s goal is to be the top dog in the prison yard, and it will only have that status when America is destroyed. Russia would like to see America destroyed as well, because then the only obstacle to Russian occupation of Europe is removed. While Russia profits from commerce with Europe, it might profit more from owning it, and would be able to remove those who historically have challenged Russian power and Russia itself.

China however is taking a page from Japan’s book. After their military defeat in WWII, the Japanese took another strategy: economic dominance. While they ultimately fell short of dominion, they achieved status as being a necessary trading partner and ally. China wants to hybridize this strategy to neutralize America by dividing its people against each other through the power of commerce. China’s recent purchases of media firms, vast tracts of land and leading members of traditionally strong American industries speak to this goal. When Chinese ownership is commonplace, few people will want to speak out against those they perceive as giving them jobs and paychecks. This leverages the weakness of democracy, which is that it can be bought because the individual citizen can be bought. This wasn’t a problem when land-owning men over 30 ran the nation, but it is when everyone over 18 has an equal vote.

When MGM decided a few years ago to remake “Red Dawn,” a 1984 Cold War drama about a bunch of American farm kids repelling a Soviet invasion, the studio needed new villains, since the U.S.S.R. had collapsed in 1991. The producers substituted Chinese aggressors for the Soviets and filmed the movie in Michigan in 2009.

But potential distributors are nervous about becoming associated with the finished film, concerned that doing so would harm their ability to do business with the rising Asian superpower, one of the fastest-growing and potentially most lucrative markets for American movies, not to mention other U.S. products.

As a result, the filmmakers now are digitally erasing Chinese flags and military symbols from “Red Dawn,” substituting dialogue and altering the film to depict much of the invading force as being from North Korea, an isolated country where American media companies have no dollars at stake. – “Reel China: Hollywood tries to stay on China’s good side,” by Ben Fritz and John Horn, L.A. Times

In theory, the claim is that we are avoiding offending the Chinese market. But like many things, this is a reflection more of Chinese power here in our country. We are afraid to challenge China on much of anything these days. We impotently issue reports about how China leads the world in economic espionage, ignore the “flood” of fake US military parts coming from China, and censor our reports of China’s rising military strength. We have given China direct access to our currency, of which they are the biggest creditor. Seemingly we tacitly approve their spying and infiltration of industry. This is because when they own so many job-producing industries, it will soon be politically infeasible to strike back against them at all.

That changes when the first shots are fired, but the Chinese are not stupid. They will delay that event as long as possible. In the meantime, like all great Seducers, they will play a willing economic partner and friend, always advancing their needs at the expense of ours. It’s a political shell game. The original shell game involves two clam shells and a pea. The game leader puts the pea under one and shuffles the two, attempting to fool observers. A good leader achieves this by making one shell attractive to the attention, while quietly moving the other one into position. China is doing the same by directing our attention at our paychecks while they destroy the foundation beneath us.

Part of the distraction involves a replacement of our productive industry with non-productive industry. They want us looking at the shell of media and social networking, while behind the scenes Chinese firms buy up essential industries or use their own manufacturing power to push those industries out of business. At that point, we will be sitting on a mound of currency that is nearly worthless, because instead of being backed by industrial and agricultural power, it is backed by technology that doesn’t do anything new except keep people in make-work jobs and on welfare busy goofing off. While we watch the shell of the Facebook IPO, who owns our heavy steel, power production, chip fabs, and factories?

The great fallacy of dying societies is that everything is free. If your job requires an hour of real work a week, then all that time is “free.” All the benefits are free. All the services are free. It never gets paid off, but what it does do is blow away the value of your currency, since currency is like stock a share in its parent entity, which in the case of nations is the collective worth of their industries. Instead of a vast productive nation of intelligent people, we’ll have a sea of entitled welfare queens, lazy bureaucrats, nearly useless make-work serfs, and so on. It’s in China’s interest to encourage this decline.

With America out of they way, there is nothing stopping China and its Eurasian allies from invading Western Europe and taking over. The Western Europeans are simply outnumbered and after two disastrous wars, have lost the will to fight. China and Russia will roll over them and leave the kind of disaster that was East Berlin or is North Korea in the wake of a once-prosperous, industrial, free Western Europe.

As said above, this decline can be reversed quickly. It requires we sacrifice our national myth that any use of one’s time is equal to any other. It’s not. End results are more important than feelings, sensations, social activity or even popularity. Production and the ability to do things matters. Right now, the people who think that the decline of this empire is their meal ticket are going to tell you that attitude is old fashioned. But these people simply don’t care about the future. It’s up to those who do to steer the West in a better direction.

NATO | Escape From Detroit: The Collapse of America’s Black Metropolis by Paul Kersey