The radical nature of conservatism 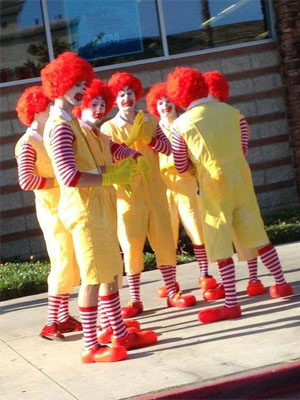 It is fashionable to disregard the differences between conservatism and the status quo. Its opponents want you to think that conservatism is another form of the status quo, just one based on money and power and not being nice to everyone.

The fact is however that conservatism is the basis of civilization because it revolts against the human mental status quo, which is to view all of society and its interactions as a series of social questions.

“What makes me appealing to others?” is the essence of this outlook, and while it’s fine for salesmanship and commerce, as the foundation of a civilization it eclipses important issues and buries them under pleasant thoughts and social overtures.

If left to their own devices, most people will come up with this type of society. They do this because it flatters them. Other people are forced to be social, thus to acknowledge them and to avoid conflict when their ideas are bad; in other words, they kiss their asses.

However, the societies that have risen above the level of rabble have always embodied a higher principle. That can be found in nature-reverence, in a strong cultural belief of transcendent direction, in religion or even in extreme hardship.

It cannot however be found in what “most people” find flattering. That in turn induces others to pander to them. When equality is implemented, the rule of “most people” dominates over the leadership of competent people, as competent ideas are rarely popular.

Conservatism encourages us to take the focus off of people and their social interactions, and instead to focus on goals and timeless principles. Even the seemingly aesthetic “the good, the beautiful and the true” is an awakening to the world beyond humanity.

Humans after all make a ghetto of their own thought, formed of two components. The first is the individual. The second is the individual as reflected in others, or a social group designed around “respect” / pandering to that individual.

Most people will insist that their social groups are based on the idea that each person’s ideas are vital and equally important. Even though this forces them to pretend that ridiculous and insane ideas are viable, it forces others to do the same for them.

Outside this human ghetto, there is reality itself. It is not a tangible thing! Reality is a complex machine that exists in more than the moment, and our task is generally to figure out how to predict it. This is the root of science, art, philosophy and other disciplines.

However, that’s difficult, and it reveals us. We are not all equal when we approach a real-world task. More importantly, we shouldn’t be. Each person specializes before they specialize, meaning they’ve got some strengths and other areas that are not so strong.

This is essential to allow specialization. You don’t get good at anything by investing equal amounts of energy in all fields. Instead, you shove a whole bunch of energy in one and rise above the norm there, achieving competence.

For this reason, most people prefer the human ghetto. In it, you don’t need to make hard choices or get good at something. You just need to be sociable. The fact that you are deferential, memorize pop culture, are witty and so on is enough to make you important.

The radical nature of conservatism is to reject this principle entirely. Reality is reality, and the human mind and its social notions, including the desires, judgments and feelings of the individual, are on a surface level which never reaches down to reality itself.

Reality itself, while never directly perceived, is understood through hard work. Observation, testing, reflection and application. This process repeats eternally, like an expanded form of the scientific method. But it’s not easy and low-impact like socialization.

Liberals tend toward radicalism of many surface forms in order to hide their dirty secret: underneath the surface of their own ideology, they’re doing nothing more than pandering to the ego, which is the oldest human error and the one that degenerates societies.

The ancient Greeks spoke of hubris, which was a combination of religious and psychological concepts. In their view, those who were arrogant enough to assume that their own thoughts embodied reality were committing a sin against the gods.

If you go to any third-world society, it should be clear why it is third world. There are low levels of social order. However, there are always high levels of personality, socialization and products of social interaction like decoration and music.

When the “ego” — a human fiction that combines self-interest and the interest of a group in which flattery is the highest principle — takes over from reality, a civilization goes down that path to third-world status. Third-world societies are remnants of higher societies.

Radicalism takes many forms. The most common is a fashion. The more difficult one is to instead deliberately reverse the most common human error, to put the self second to reality and understanding, and thus to fashion a rising society.

These are not flattering to the individual. However, they provide the individual with a more stable existence, and a chance to grow and overcome the inner moral weakness which makes someone so underconfident they expect the world to flatter them.

The ego on fire | Traditionalism and the Cosmos