The origins of political correctness 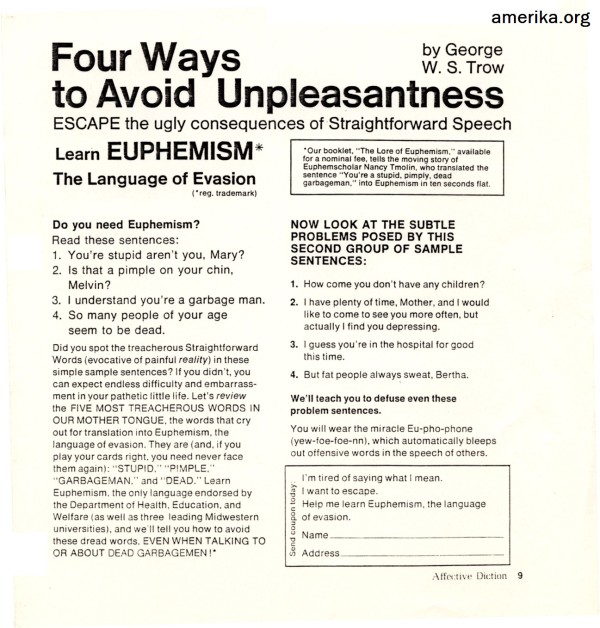 Above you can read the short humorous pamphlet Euphemism: the Language of Evasion, by George W.S. Trow (click image for full-size scan). Probably dating back to the 1970s, this humor piece mocks the tendency of the age to conceal unpleasant truths behind nonsense language.

That phenomenon, while in itself not unique, represented a new wave in post-war Western society as the old social order and social hierarchy faded away and was replaced by the egalitarian flat hierarchy. Under the old ways, every person had a role and the limitations of that social status, and the likely limitations of the person serving it, were well-known. The castes did not mix and so there was no need to obscure the grim truths of life.

Enter the 1960s. Now, everyone rubs elbows. This means that where equality is not in fact true — a common occurrence — there must be a social taboo on noticing things. For example, if you are a corporate lawyer and your daughter brings home her new boyfriend who works in food service, it is not considered polite to mention. And yet, with this politeness was inverted: the original idea of politeness was to find a non-confrontational way of discussing just about anything, but the “new” politeness simply cut out any friction by censoring the speaker.

Do you need Euphemism?

Did you spot the treacherous Straightforward Words (evocative of painful reality) in these simple sample sentences? If you didn’t, you can expect endless difficulty and embarrassment in your pathetic little life. Let’s review the FIVE MOST TREACHEROUS WORDS IN OUR MOTHER TONGUE, the words that cry out for translation into Euphemism, the language of evasion. They are (and, if you play your cards right, you need never face them again): “STUPID,” “PIMPLE,” “GARBAGEMAN” and “DEAD.” Learn Euphemism, the only language endorsed by the Department of Health, Education and Welfare (as well as three leading Midwestern universities) and we’ll tell you how to avoid these dread words, EVEN WHEN TALKING TO OR ABOUT DEAD GARBAGEMEN!*

Our booklet, “The Lore of Euphemism,” available for a nominal fee, tells the moving story of Euphemscholar Nancy Tmolin, who translated the sentence “You’re a stupid, pimply, dead garbageman,” into Euphemism in ten seconds flat.

NOW LOOK AT THE SUBTLE PROBLEMS POSED BY THIS SECOND GROUP OF SAMPLE SENTENCES:

We’ll teach you to defuse even these problem sentences.

You will wear the miracle Eu-pho-phone (yew-foe-foe-nn), which automatically bleeps out offensive words in the speech of others.

I’m tired of saying what I mean.
I want to escape.
Help me learn Euphemism, the language of evasion.
Name
Address

The language of euphemism, like the political correctness to follow it in the subsequent decade, focuses on eliminating inequality in language. The terms covered by this pamphlet relate to physical inequality (fat, pimply), class and caste (garbageman), desire for exclusion (depressing) and mental ability (stupid), in addition to classic white lie territory like death and sterility.

As we enter an age where government and media support the “useful idiots” of the SJW-herd in enforcing speech codes on the population through manufactured outrage and convenience ostracism, whereby anyone singled out by the herd is dropped by all associates to prevent the herd from in turn attacking them, it is useful to remember the root of this line of thinking: evasion of reality.

Four articles from In Mala Fide posted | The Assets (2014)