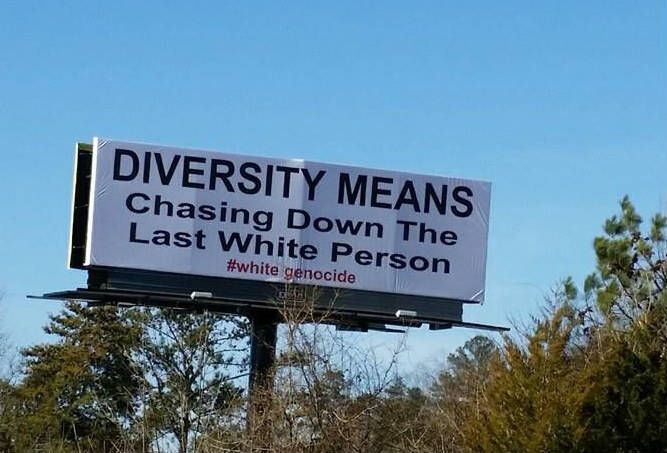 When He opened the second seal, I heard the second living creature saying, “Come and see.” Another horse, fiery red, went out. And it was granted to the one who sat on it to take peace from the earth, and that people should kill one another; and there was given to him a great sword. – The Revelation 6: 3-4

Diversity means endless conflict. It must, and it cannot equal anything else. There are problems in this world that must be avoided, not solved. You cannot divide by zero or accurately map The Point At Infinity on the surface of The Reimann Sphere.

Just as you can’t really identify and graph the intersection of two definitionally parallel lines, you cannot make diversity coexist and behave in a manner legitimately true to the inner yearnings and beliefs of any of its constituent parts. None of these diverse people have to be bad or evil to constitute a failure mode. They just have to be themselves and exist upon it. Essence may preceed existence, but eventually existence will out. Divergent existences, even ingenuous and unhateful in nature will lead to dissonance predictably followed by conflict.

Amerika prides itself upon !DIVERSITY! A Conservative Inc. take on this goes as follows.

But in the midst of all of these discussions of international affairs, I was asked many times in Japan about the recent events in Los Angeles. From the perspective of many Japanese, the ethnic diversity of our culture is a weakness compared to their homogeneous society. I begged to differ with my hosts. I explained that our diversity is our strength. And I explained that the immigrants who come to our shores have made, and continue to make, vast contributions to our culture and our economy.

It is wrong to imply that the Los Angeles riots were an inevitable outcome of our diversified society. But the question that I tried to answer in Japan is one that needs answering here: What happened? Why? And how do we prevent it in the future?

Dan Quayle peddled this mendacious gallimaufry of disingenuous demagoguery to head off the collapse of civil order into a post-apocalyptic Mad Max wasteland of competing phenotypical tribes. His gallimaufry of words was in what he viewed as service to a gallimaufry we euphemistically refer to as a Proposition Nation. The Proposition Nation tripe was a psuedo-erudite exercise in posturing athwart an awful and unpeachmintable truth. That truth simply states that diversity will never work for order in a logically thermodynamic universe.

Several smart mathematicians prided themselves on defining Points At Infinity. They were expected to make the parallel lines cross and null-set was not an acceptable, full-credit answer. This is the psuedo-erudite posturing they committed instead of legitimate logical verification.

Points at infinity therefore do not have exact trilinear coordinates.

Like The Proposition Nation, The Point At Infinity exists in theory. OK, cool story there, Brotherman. Draw me that Point At Infinity. Oh, wait, you’ll propose me a Reimann Sphere, and like the truth on an episode of The X-Files, that Point At Infinity, on or within that entirely notional Reimann Sphere, is out there somewhere. In a dormitory discussion of mathematical theory you can light one up, burn the futhermucker down, and get really deep discussing the theoretical positions of notional points, superpositioned supposedly upon imaginary domains. Then the drugs wear off and its a bummer slog back to reality and hopefully a B- in Complex Analysis.

With diversity, there is no bong hit and no imaginary domain of existence where we can presuppose just for poops and giggles within which that diversity works. The Proposition nation is always one dumb idiot’s misbehavior or misunderstanding away from turning into the Lost Angeles that James Danforth Trustfund Mediocrity Quayle had to go over to Japan and make excuses for in his grating and execrable fashion.

I remember a friend of mine from UCLA showing a bunch of us a really scary 8mm film of that Los Angeles. The strong and vibrant diversity was marching up La Brea in hateful synonymy. It reminded me of a really tense and dramatic part of The Two Towers by JRR Tolkien. The orcs of Isengard had conspired in armor with Sauruman and were advancing upon the desperate people holed up in Helm’s Deep like an encroaching plague of locusts.

The reality of this diversity is worse than the orcs of Tolkien’s fiction. The orcs are evil and they know it. The diversity is honest, sincere, probably decent, but profoundly deluded. It is then slavishly driven by malignant knaves who lie to them and provide a fictitious moral justification for all resultant destruction and depredations.

Then the leader of all of this magical diversity emerges. It doesn’t require too great a leap of imagination to see him as follows: “Another horse, fiery red, …. And it was granted to the one who sat on it to take peace from the earth, and that people should kill one another; and there was given to him a great sword.” And under that great sword will go the ignorant and disingenuous concept of some intellectual pinhead’s Proposition Nation. And on that black and evil day, it will be thus for Amerika.

An Eternal Search For The Silver Bullet | Periscope (December 3, 2019)