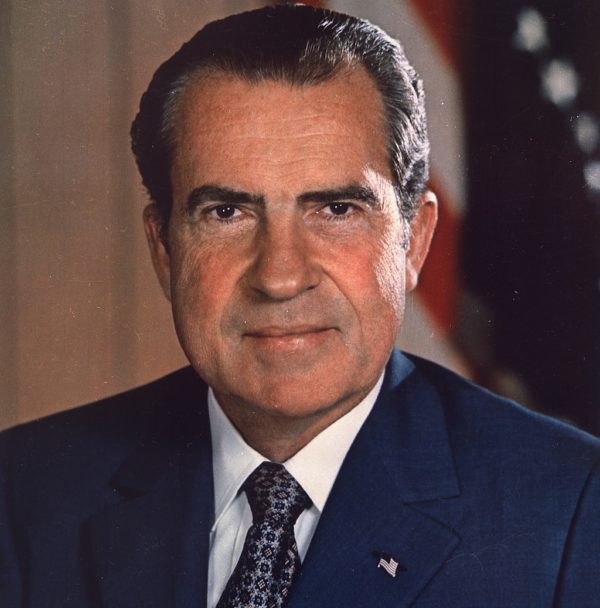 Democracy fetishists like to claim Democracies will consistently avoid really bad leaders. They’ll readily admit to not exactly nominating Charlemagne for the presidency in recent US elections. But they’ll insist that the democratic rise of Hitler was far more of a Black Swan Event than the reigns of Roman Emperors Commodus or Elegabolus.

Strip away the shrink-wrap cocoon of ego-gratifying, jingoistic Whig History and we discover that at least six recent Amerikan Emporers could qualify as legitimate evil emporers who have materially and morally worsened the commonweal of the average decent American citizen. Today we describe the nefarious contributions of the odious Richard Milhous Nixon.

There is a correct way and an erroneous way to react to getting jobbed. You can either hate, revile and refuse to be anything like your enemy, or you can become that enemy and bring down destruction upon your very own principles. Richard Milhous Nixon is a man who failed to make this choice properly, and thereby came to identify with and imitate the malefactors who defrauded him. Nixon, you see, was totally defrauded of an election victory in the 1960 Presidential Election.

In 1968, Richard Nixon had seemed to have put the frustration and unfulfillment of 1960 behind him successfully. He had just outlasted Hubert Humphrey and carried a mandate to “Bring America Together Again.” Yet he had two tragic flaws that brought down his Presidency and rendered him an evil Amerikan Emperor. These two flaws were cowardice and bitterness. He lacked the courage to abolish Liberal government programs that he knew were harmful to the commonweal. His bitterness towards his enemies led him to behave in dishonest and unethical ways that delivered him into legal jeopardy at the hands of his duplicitous enemies. If Watergate was a constitutionally legal coup, then it was President Nixon who handed Brutus and Cassius the knives.

Nixon came into office faced with two situations that required his remediation in order for his Presidency to be a success. He had to solve Vietnam and he had to fix LBJ’s disastrous Great Society Gimme-dat State. Both the war in Vietnam and the metaphorical one on poverty had two potential solutions.

Nixon went for an option #3. He continued to wage each in a manner that was not ferocious enough to produce victory. By so doing, Nixon prolonged both terrible policies and failed to achieve what could have been a positive outcome from either. It was the worst of both worlds. It helped make the Nixon Presidency utterly 70s.

In Vietnam, Nixon’s endorsement of airpower was a strategic improvement over LBJ’s. Operation Linebacker I created an opportunity to win. It took a portion of the war into North Vietnam. It wasn’t just Saigon or Huey getting turned into junkyards. Blowing up North Vietnam’s fuel storage capacity and dropping their key bridges stopped their army in its tracks. But it didn’t happen until Nixon had begun winding the US presence down.

Linebacker was a thing out of season. It was rain after the hay was in the barn. To win that war, Nixon had to run Linebacker, followed by Operation Full-House Blitz. Full-House Blitz would have been the ground invasion of the North to annihilate their land forces until at the very least, they renounced all future claims to Southern Vietnamese territory. But instead, Nixon continued dropping the bombs while he watched the South Vietnamese bungle. If there was no plan to finish the job, Nixon should have terminated the entire conflict. All US participation should have ended prior to the Election of 1972. Either we blow them away or we blow out of town.

Nixon inherited a similar quagmire to Vietnam in the form of LBJ’s War on Poverty. Daniel Patrick Moynihan warned him to get out of dodge. Back in 1965, Moynihan produced a landmark sociology paper entitled “The Negro Family: The Case For National Action.” His commentary on the negative impact of the AFDC program was a warning of what The Great Society would do to help turn America into Amerika.

The Breakdown of the Negro Family Has Led to a Startling Increase in Welfare Dependency. The majority of Negro children receive public assistance under the AFDC program at one point or another in their childhood. In the beginning, the number of AFDC families in which the father was absent because of desertion was less than a third of the total. Today it is two-thirds. HEW estimates “that between two-thirds and three-fourths of the 50 percent increase from 1948 to 1955 in the number of absent-father families receiving ADC may be explained by an increase in broken homes in the population.” A 1960 study of Aid to Dependent Children in Cook County, Ill. stated:

“The ‘typical’ ADC mother in Cook County was married and had children by her husband, who deserted; his whereabouts are unknown, and he does not contribute to the support of his children. She is not free to remarry and has had an illegitimate child since her husband left. (Almost 90 percent of the ADC families are Negro.)”

So Richard Milhous Nixon could have nipped the situation way before Baltimore got turned into Harm City or before Detroit looked more bombed out than Hiroshima. He could have gotten the government out of the ghetto. He could have prevented anything like ObamaCare from ever have had a prayer of passing. But no. His solution to the problems of The Welfare State was to make it more efficient. All that accomplished was to make more room available on the parasite bus. He created more government and allowed American cities to turn increasingly Amerikan.

And then we come to Nixon’s ethical collapse. He was impeached and resigned to avoid political checkmate. Impeachment is entirely cynical. It’s a way to allow for coups and still maintain the US Constitution. It reduces rebellion to an anomaly. It’s like how the Matrix had already planned for Neo. If the Zeitgeist had ever turned on Barack Obama, Lindsay Graham could have impeached him for halitosis. Barack Hussein Obama could brush, floss and mouthwash all he wanted before he read off his teleprompter. Impeachment is pure political lawfare against the Executive Branch.

By failing at ethics, Nixon gave his enemies the pretense with which they ultimately destroyed him. He may not have felt like a crook, but he became one. Seeing a member of the greasy, loathsome, mobbed-up Kennedy Klan lionized for having founded Camelot on The Potomac made Richard Nixon’s soul seethe. Nixon came to believe Mordred had a point. Mordred way well have had a point, but it didn’t change the fact that Mordred d’Orkney was a bastard. The fact this led Mordred to feel resentment, didn’t justify Mordred destroying what Arthur Pendragon had built. It all just made Mordred an evil bastard.

So Nixon got jobbed in 1960. It caused him to become entitled and paranoid. He adopted the whole LBJ credo of “if you ain’t cheatin’, you ain’t tryin’.” He figured it was win at all cost, and would do anything to win. Breaking into the Democratic Party Headquarters at The Watergate was just one example. Impounding the funds appropriated by Congress and refusing to spend them rather than vetoing wasteful spending bills was another. Nixon’s paranoia manifested itself when he made his enemies list and went about using the IRS to Obama the crap out of them. As much as Conservatives hate Lois Lerner, she wasn’t the first to use the taxing power of the state as a political weapon. The Tea Party got screwed by Lois Lerner utilizing a tool Richard Nixon dropped into the DC political toolbox.

The Articles of Impeachment against Richard Nixon read like a Clinton or Obama Administration SOP for dealing with enemies. So not only did he fail to get them back for 1960, but he brought about his own political downfall. Not only did he bring about his own political downfall, but he gave the iniquitous bastards some nifty evil ideas. If only he had asked himself what cheating his way into power ended up doing for JFK in the end.

Richard Nixon was an intelligent man with potential for greatness. But he was seduced into amorality by defeats at the hands of scoundrels. He betrayed both his party and his nation by adapting their disingenuous tactics for his own cause. He failed at solving the two major problems his administration faced by being too half-hearted and timid to drive the broadsword through to the bloody hilt. He who isn’t willing to die gets killed in a war. He who gets killed dies a failure. Richard Milhous Nixon’s cowardice and dishonesty make him an evil Amerikan Emperor.

What Is The Root Of Modernity? | Leftist Race Guilt Is Nothing More Than Spam