The culture of non-culture

So we’ve had some celebrity deaths, and like all things they come in threes, although science can’t explain that. Granted, science is also still not sure if eggs are good for you, if we’re all biologically the same, or what quantum theory underlies all matter. But scientists will arrogantly tell you The Absolute TruthTM nonetheless.

A pin-up, a jingle writer, and a late-night TV pitchman. 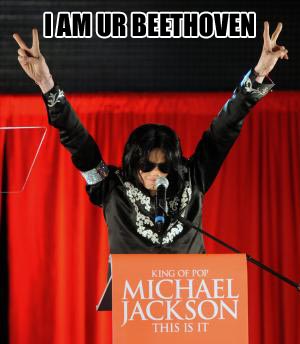 Is this our “culture”? It’s the culture of non-culture. If you don’t have an ancestral culture with its dances, language, rituals, ceremonies, food preparation, costumes, literature, art and values, you just sort of pick up whatever trends are popular.

Michael Jackson was, at best, a talented songwriter in the pop style. Pop music, known for its endless repetition of catchy themes, is not rocket science to write. In fact, most of the best musicians avoid it because it’s really boring if you know anything about music or life. But Jacko was the king of pop, etc etc because we needed a hero and he was on our side during the Cold War. Awesome.

Farrah Fawcett, while a nice person, was known for her clingy swimsuit more than anything else. She did not invent rockets. She probably participated in human rights missions, but so do millions of others, except they’re not celebrities. Oh well.

Billy Mays was a lot of fun, because if you did encounter late-night TV when he was selling you some nostril cleansing product or tomato growing apparatus, he made it more amusing than most. But there’s not much distinction in that either.

What I’m getting at here… our culture is like the sweepings from the floor of history. We dote on these people because they’re famous, but then the trend changes, and things move on. We accumulate what’s left over and call it culture because we have nothing, because some wise idiot convinced us that culture like strong government was a form of oppression and we’d finally be “free” when we threw it out.

So now we get… heroes who aren’t heroes, a culture of non-culture, a society based not on working together but barely tolerating each other?

Justification | What we need to fix as a species