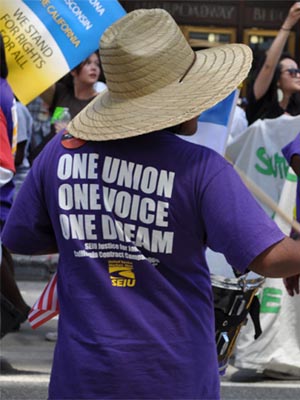 Last summer, we got our first clear picture of how this country is divided: wealthier, whiter, more suburban, more educated and more independently successful people want a meritocracy.

With recent statistical information, we’re starting to see this as a demographic conflict: a younger, non-white and liberal population replacing an entrenched white majority that became neurotic, lowered its breeding rates, and faded into liberalism in the 1960s, but seems to be bouncing back toward realism.

By realism I mean consequentialism, or “what will the results of that action be?” instead of the kind of wishful thinking, egalitarian moralizing, altruistic sentiment and other reality-denying acts of the left.

Our demographic conflict is going to mask another type of conflict: a clash of civilization-types. The esteemed historian Samuel Huntington wrote about the “Clash of Civilizations,” or how different ethnic-religious groups would duke it out in the future. Back to blood, as the saying goes.

I think this is even deeper than that. This is about the division I mentioned above — meritocracy, or entitlement state — in the context of demographics.

Those who could build a country like the USA (1776-1965) were not believers in sitting around and waiting for government to fix their problems.

Those who have immigrated to the USA recently come mostly from places which have a long history of people waiting for gods, government, weather or karma to save them from oblivion. That is because these places fell into third world status, something which occurs not through a lack of technology, but through a lack of organization, and the consequent corruption, bad hygiene, chaotic government and eventually social collapse.

What’s interesting about this division is that it straddles racial lines as well. Some of the people mentioned in the preceding paragraph come from white communities with a history of social, political and economic troubles, like Southern and Eastern Europe. And many white people buy into the hoax that is killing the West, namely liberalism.

While the divide is racial, that is because since 1965, it has been liberal policy in America to import voters. The white majority tends to vote Republican; newer citizens tend to see themselves as defined in opposition to the majority, and thus they tend to vote Democratic. They are also by virtue of their backgrounds more inclined to the entitlement state.

A lurking surprise for everyone is that while set in the background of a racial conflict, this current split is basically about class war, which only exists as a facet of liberal politics. In liberal politics, the masses are always innocent victims; the right tends to prefer a meritocracy and to point out that if the masses didn’t rise, there must be a reason other than oppression.

But liberalism continues to divide the white people against themselves:

A long-simmering movement by liberal stalwarts in southern Arizona to break away from the rest of the largely conservative state is at a boiling point as secession backers press to bring their longshot ambition to the forefront of Arizona politics.

A group of lawyers from the Democratic stronghold of Tucson and surrounding Pima County have launched a petition drive seeking support for a November 2012 ballot question on whether the 48th state should be divided in two.

Partisan tensions have long been a fact of life between left-leaning Pima County and a Phoenix-based political establishment that has produced such conservative giants as Barry Goldwater and John McCain.

But the rift was heightened during the past two years as Republican Governor Jan Brewer and her allies in control of the statehouse pursued a political agenda Democrats saw as extreme, including a crackdown on illegal immigration and proposals, ultimately unsuccessful, to nullify some federal laws. – Reuters

If you want to know why I politely differ with many of my pro-white political cohorts, it’s this:

In short, even if by some magic act of an unknown god all non-whites disappeared from earth tomorrow, we would have removed a symptom, and not the disease.

The disease is liberalism.

In the age of the clash of civilization types, most white people want a practical conservative party. Unconsciously, they want to get government out of most functions, since large bureaucracies specialize in screwing up and wasting money. They want to let organic means, like culture, religion and social meritocracy do the rest.

Perhaps the only reason white people are not running to the Republicans in the US and the various conservative parties in Europe is that those parties are off-topic. In Europe, they will periodically stand up and denounce Muslim immigration; then, silence. In the USA, we get a few bones tossed to social conservatism and then, silence. These parties have a few pet issues and don’t get past them.

I’ve written in the past why “underground” right wing parties go nowhere. The public is conditioned by Hollywood movies to fear right-wing neo-Nazis and skinheads who take delight in cruelty toward non-white races; sadly, all too often our white nationalists just act the part, and the voters nod and say, “The movies were right!” and vote to the left. White nationalism is the antithesis of pro-white politics. It is a sabotage of pro-white politics.

While the vanguardists waste our time, and the mainstream politicians are too smart to touch on real issues, our division continues. It’s straight out of 1789, 1861, 1917 or 1968. What kind of society do we want?

One side wants a society that is rising because it adheres to time-honored values. We call these people conservatives. Conservatives note that if you do a lot of drugs, drink too much, whore around, waste your money, or live in filth, you tend to end up impoverished, disorganized and corrupt.

Those same rules apply whether you are an individual or a nation.

The other side wants a permissive society. In their view, there is no need to adapt to nature or to behaviors that avoid bad consequences. All is emotion; everyone is equal without having done a thing to deserve that designation. Because everyone is equal, we should pay for them, starting with the impoverished.

A psychologist might recognize that the first group has a sense of purpose, where the latter group is indrawn and neurotic, wanting a sense of purpose to appear magically out of the world. However, instead of finding meaning in religion, they find it in the false religion of “progress” meaning devolution toward a permissive state.

It’s possible we’re looking at a branching of our species:

In an article published in the April issue of the Journal of Politics, researchers examined physical and behavioral traits of more than 5,000 married couples in the United States. They found spouses in the study appeared to instinctively select a partner who has similar social and political views. – Science Daily

Research by Rice University professor of political science John Alford indicates that what is on one’s mind about politics may be influenced by how people are wired genetically….Alford found that identical twins were more likely to agree on political issues than were fraternal twins…[Alford said] “predictably dissimilar correlations of social and political attitudes among people with greater and lesser shared genotypes suggest that behaviors are often shaped by forces of which the person themselves are not consciously aware.” – Science Daily

Liberals, who want to repeat the pleasant-sounding but destructive experiments of the last three centuries, are being left behind. Conservatives are separating from the herd, again, because they see no point in reproducing failed experiments.

Whenever someone starts talking about how the big corporations control us, or a race or class war will work against us, or even how we should all become liberal to save the white race, remember this: the fundamental conflict that is defeating white people is the clash between two civilizations.

At some point, we will all have to pick a side.