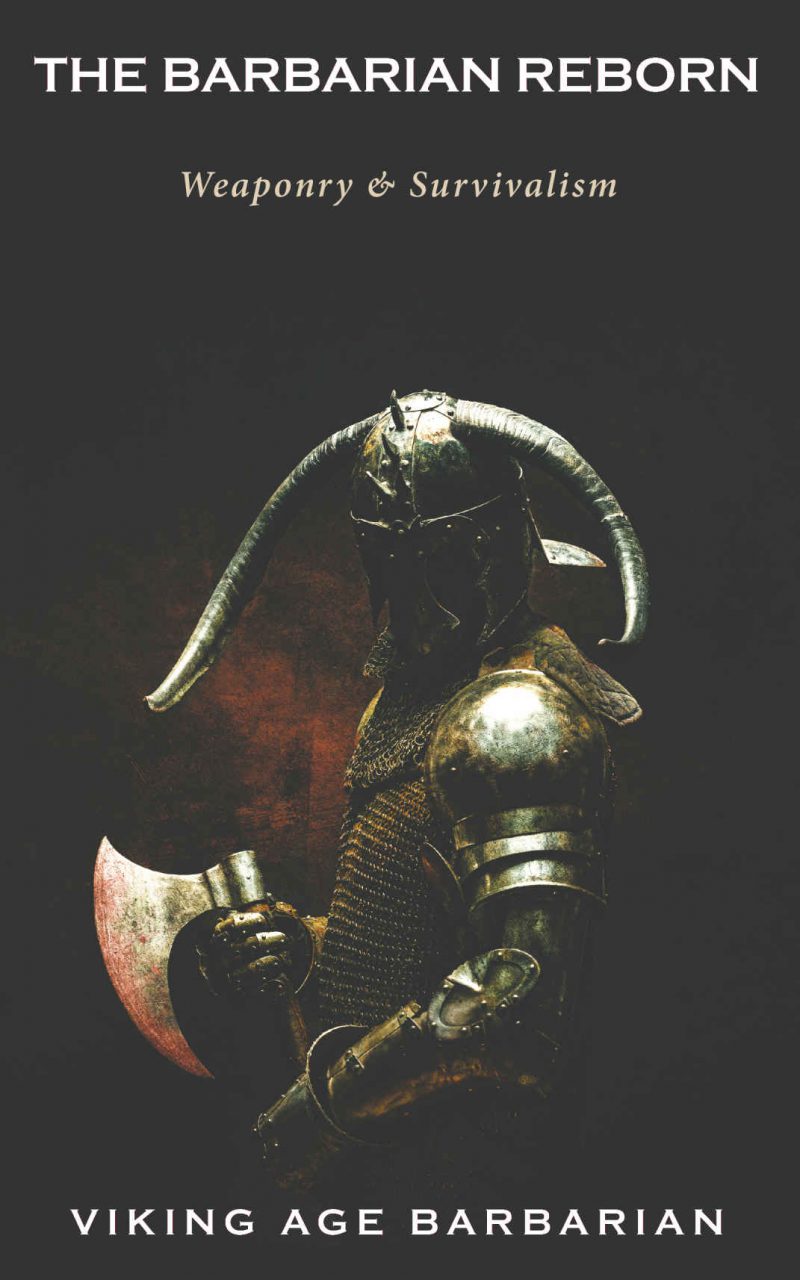 This book ably joins the apocalyptic Huxleyians and the survivalist underground by pointing out a continuity of thought: civilization is failing, thanks to pursuing the pleasures of individuals instead of natural order, and so we must prepare, starting in our minds.

Following a Nietzsche/Redbeard course of thought, The Barbarian Reborn: Weaponry & Survivalism pursues the idea that only those who cast aside morality in order to favor strength will survive in a coming age, when society will disintegrate into a cross between Detroit and Terminator-era Los Angeles.

Sounds good, perhaps, since this over-grown society values the weak — deceptive, socially overactive, passive, deferential, and manipulative — over the strong, who are marginalized because the great sheep festival fears them and what they will do if not held back by armed police and the threat of losing livelihoods.

While I do not subscribe to this vision on two counts (society will decay into Brazil 2.0, and the strength Nietzsche talks about is the moral and intellectual fortitude to be realist) the case made here for the decay is persuasive: across the board, indicators of civilizational health are failing, and like other great civilizations past, we threaten to fall apart, balkanize, and then end up as a no-mans-land in which a grim daily fight for survival takes the place of art, literature, philosophy, economics, and learning to code.

Robert E. Howard (1906-1936), the creator of Conan the Barbarian, was right in saying: “Barbarism is the natural state of mankind, civilization is unnatural. It is a whim of circumstance. And barbarism must always ultimately triumph.” The reason for this has already been provided in this book: the term “civilization” is usually defined as human society at an advanced level of technological, political, economic, social and cultural development (including arts, sciences and general learning), with complexity in both the social structure and culture. Barbarism is the negation of this. Maintaining this ordered structure requires dedication, commitment, energy and resources, but allowing it to wither on the vine is the easiest thing in the world and requires only that “good” men do nothing, which is what they do best. Hence, as Will Durant has put it: “From barbarism to civilization requires a century; from civilization to barbarism needs but a day.” Barbarism is the natural outcome of social entropy. As it is coming our way, fast and inevitably, we may as well embrace it. (71)

The fusion of apocalypticism and survivalism fits into the narrative of the Right, which is that we have abandoned natural law for a committee popularity contest that always makes the wrong decisions, as well as the knowledge of the ancient faiths, namely that civilization runs in cycles from birth to death, and when it fails, a dark age appears without warning, casting all the world into primal conflict.

Nature provides another template for this kind of destruction with its passage of ages such as the perishing of the dinosaurs, creating times in which all previous life is destroyed and evolution has to go back to its roots and start again. Then again, in that transition, the mice won out over the giants.

For the first third of the book, Viking Age Barbarian covers the many philosophical angles of barbarianism, or the idea that might must replace right, touching on all of the recent and ancient writing which addresses the constraints of morality and the need for tribalism and strength to replace what has become a rotten order here in the modern West.

Readers of this site will find this section of the book most interesting as it provides a compact and useful definition of one of the major anti-modern viewpoints, essentially a rejection of society in favor of biology, and a recognition that attempting to tame nature merely makes it more powerful.

The Übermensch is not a fixed being, but rather is one who constantly engages in the process of overcoming, fighting against limitations, pushing boundaries and striving to overcome both himself and his enemies. Pain, suffering and the struggle for life – beatings on the anvil of existence – are welcomed by the Übermensch,so that he can become stronger and crush pity and weakness, pity and weakness being sure signs of degeneracy. (62)

An analysis combining a postmortem on modernity with a meditation on the core values and behaviors that will replace it, this essay explores what we must overcome in order to remove the fog of civilization from our brains, and leads into the next two sections which address survival in the new dark age.

The first of these two addresses self defense, while the latter (introduced as an appendix) addresses the necessary skills for surviving in a time when wild animals again stalk the Earth and preying on humans. Of these, the middle section is the most exhaustively researched and provides a fresh look for the dissident wing formed of alienated critics of modernity.

Covering martial arts, weapons, and physical fitness, this section explores the necessary skills of an era without civilization. It does so in the form of a review of existing literature with careful balancing of the various opinions, coming to clear and useful conclusions.

For example, instead of performing the modern dropout ritual of describing a grim landscape and then (in an echo of the 1983 movie The Survivors) listing where the best weapons can be found on Amazon, The Barbarian Reborn: Weaponry & Survivalism points to likely objects one will encounter and gives a basic assessment of their relative worth.

In Post Apocalyptica, in the United States, guns will be the most common doomsday weapon, but this will not be so in many other jurisdictions. In the early days in gun restricted areas, thugs and their gangs will be well armed with illegal guns and will prey upon the unarmed, pillaging, raping, torturing and murdering along the lines of the present-day farm killing sprees in South Africa, raised to the exponential power of many thousands. Perhaps some folk in desperation may acquire illegal guns at a premium price, but most people will not. It will be necessary then to have a sub-optimal means of self-protection, and as argued in the previous chapter, “go medieval.” (182)

It serves a useful role in this capacity mostly by debunking lore that has come about as people posture about their preparedness, and points out instead the far simpler and more practical truths of hand-to-hand combat and use of melee weapons.

Perhaps not everyone will agree that a post-apocalyptic wasteland rapidly approaches as modern civilization decays, but all will benefit from the lessons herein on how to survive in a place without functional police or social order.

Among its many positive attributes, The Barbarian Reborn: Weaponry & Survivalism stimulates our thinking about what type of outlook we must have to survive the gradual loss of civilization, and hones the perspective required to keep the necessary and discard the rotted, with aggression, of course.