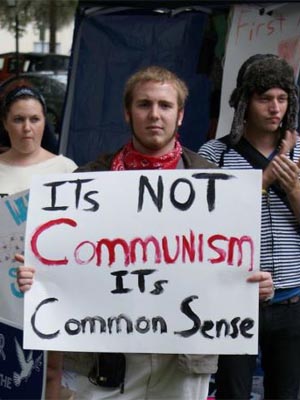 We bury our greatest fears. In their place we erect symbolic ones, totems from our primitive past, which we then bash and conquer “symbolically” in order to make ourselves feel better.

Reality doesn’t change. The reality inside our heads does.

Right now, there’s a huge publicity blitz on the internet designed to make you think that Voldemort-Hitler is going to censor the internet unless we all band together and fight him. Time to rage! For great justice!

The reality is that this is the daytime show. It’s there to keep you busy. It’s basically harmless. And in the background, the sinister reality is taking form.

I’m not arguing this sinister reality will be apocalyptic. In fact, I’m neither a utopian nor doomsayer. To me, it’s clear that the primary threat to this society is the same thing that threatens all societies, which is slow decay from within.

But it might be worth keeping an eye on, because we will pay the price for it.

Back to that false fear, the surrogate and symbolic talismanic fear:

SOPA â€” the Stop Online Piracy Act â€” has been presented in the House of Representatives as a way to protect movie studios, record labels and others whose music and films are taken and copied online. There was a hearing on it today. Its Senate counterpart is called the Protect IP Act.

Eric Schmidt, executive chairman of Google, said the bills would overdo it â€” giving copyright holders and government the power to cut off websites unreasonably. They could be shut down, and search engines such as Google, Bing and Yahoo could be stopped from linking to them.

â€œThe solutions are draconian,â€ Schmidt said Tuesday at the MIT Sloan School of Management. â€œThereâ€™s a bill that would require ISPs [Internet service providers] to remove URLs from the Web, which is also known as censorship last time I checked.â€ – ABC

It sounds terrifying indeed. Until you realize that he’s describing a slight enhancement to the status quo powers that law enforcement has, and that we’ve lived under the current powers and we’re all still here and not censored.

The Digital Millennium Copyright Act provides essentially the same functionality, just not as smoothly. Its purpose is to allow information owners to stop its spread quickly. It’s like any other injunction, just faster and with fewer barriers.

The new law takes the DMCA and extends it further. Remember the ruckus and hue and cry that arose when the DMCA passed? We were told censorship was coming, to use HAM radios instead of the internet, and that the end was nigh. It didn’t happen that way.

It won’t here, either. This isn’t censorship — it’s being used to block leaks of copyright content. Anyone who uses it to “censor” is then going to be liable in civil court, which makes this a bad tool to use for censorship. You can get sued into poverty for misusing it.

In the meantime, what sneaky things could be happening instead…

The idea is to analyze interactions over video conferences, telephone, text messages and other forms of digital communication to look for patterns of behavior that have been defined in advance as negative or positive, and then assign a score to each person based on what the system finds. – Geekwire

Evil Satan-Hitler Microsoft (MSFT) is attempting to take over our world again and make us slaves to a Minority Report styled fascist 1984 future! …right?

No. The point is that we insisted on full employment, and sent women off to the offices as well as men, and then insisted that incompetents be hired, and then imported a huge horde of people. Now we have literally millions of people who should not be in the jobs they’re in, but they can’t be fired.

Microsoft has seen the niche opportunity, and will use it to make some money. Most people at jobs are incompetent, bored, evasive and subversive. This software will use what was once done by human minds — when people were smarter — to assess them and yank the least competent.

But you might not want this technology deployed everywhere. It’s not that bright. You might prefer a human in this role.

An analyst types Fikriâ€™s name into a search box and up pops a wealth of information pulled from every database at the governmentâ€™s disposal. Thereâ€™s fingerprint and DNA evidence for Fikri gathered by a CIA operative in Cairo; video of him going to an ATM in Miami; shots of his rental truckâ€™s license plate at a tollbooth; phone records; and a map pinpointing his movements across the globe. All this information is then displayed on a clearly designed graphical interface that looks like something Tom Cruise would use in a Mission: Impossible movie.

As the CIA analyst starts poking around on Fikriâ€™s file inside of Palantir, a story emerges. A mouse click shows that Fikri has wired money to the people he had been calling in Syria. Another click brings up CIA field reports on the Syrians and reveals they have been under investigation for suspicious behavior and meeting together every day over the past two weeks. Click: The Syrians bought plane tickets to Miami one day after receiving the money from Fikri. To aid even the dullest analyst, the software brings up a map that has a pulsing red light tracing the flow of money from Cairo and Syria to Fikriâ€™s Miami condo. That provides local cops with the last piece of information they need to move in on their prey before he strikes. – Business Week

Truly evil governments do not announce their new powers. They use them.

Palantir and systems like it work on a simple principle: now that just about everything is in a database, we can collate all that information and use it to form a very accurate profile of what an individual is doing.

While right now this is in the hands of government, it’s also already in the hands of many paid services. Soon other private citizens will be able to look you up this way. They already can Google-stalk you. Who do you fear more, a government conspiracy or the illogicality of other people?

Trust in information on the web is being damaged by the huge numbers of people paid by companies to post comments online, say researchers.

Fake posters can â€œpoisonâ€ debate and make people unsure about who they can trust, the study suggests.

Some firms have created tens of thousands of fake accounts to flood chat forums and skew debate. – BBC

We trust the internet, with its user-editable resources including Wikipedia, as a source of information.

But when anyone in the crowd can edit that information, what prevails? People game the system. If Joe runs a pizza parlor, he’ll be sure to write a few reviews.

If you blindly trust information on the internet, you will be easily misled.

Yet blind trust in the internet seems to be very popular. Why? (Who benefits?, we might ask)

The last thing to note is the dark side of the social media. Watching rumors pose as facts over and over is not good for anyone and I cannot see any way to prevent bad things from happening because of it. The best example of this was last night when someone took a report directly from someone in the middle of the fracas. The person had a landline so calling out was possible.

Over and over, when asked, the person reported that there was no use of tear gas. Yet, the chat rooms were ablaze with accounts: â€œThey are using tear gas!â€ None of these people was actually there to report this information. Finally, a bogus video of a tear gas attack appeared on Twitter. Nobody knew where this came from but it was passed all over the place. Still, the insider said there was no tear gas.

Tear gas or not, you can easily see how a planted video or plausible falsity could take off like wildfire and enrage the protestors. – John Dvorak

We have no evil government or corporation to blame here. Cue 99% of people tuning out, because their televisions and movie screens have told them that evil must be concentrated in a single actor, not distributed among all of us.

Instead, what we see is our mental inactivity as a population leading us away from reality. Who cares if it’s true, when someone else said it, and it’s important to us to be seen as tolerant and inclusive of others? Let’s just spread the rumor.

That in turn will of course start more panics about how various government bills are the end of the world, and will in turn lead to a lower standard of behavior, requiring more software to monitor us at work. But our citizens and pundits aren’t thinking that far ahead. They’re preoccupied with surrogate fears.