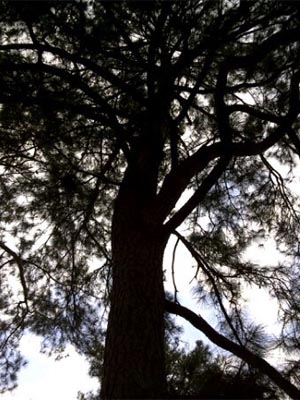 The popular illusion tells us that media “informs” us as voters. In our hearts, we know it does little more than titillate and raise outrage.

If you look hard enough, there’s real information — or part of it, anyway — and it can be found and talked about. But 400,000 people talking about Miley Cyrus just dominated the airwaves and squeezed that real information out.

This means that the majority of voters are being “informed” of nothing more than celebrity news, sex gossip, crypto-advertising, public drama, lurid murders and human interest stories. There is no information there.

To compensate, those who have a strong ideological position — like environmentalists — retaliate by turning up the intensity. They don’t mention, they scream. In blood red all caps full bold headlines.

The enormous decline of large, apex predators and “consumers” ranging from wolves to lions, sharks and sea otters may represent the most powerful impacts humans have ever had on Earth’s ecosystems, a group of 24 researchers concluded today in a new report in the journal Science.

The decline of such species around the world is much greater than previously understood and now affects many other ecological processes through what scientists call “trophic cascades,” in which the loss of “top down” predation severely disrupts many other plant and animal species.

Such disruption is sufficiently severe that it now affects everything from habitat loss to pollution, carbon sequestration, wildfire, climate, invasive species and spread of disease, the scientists said. It is also a driving force in the sixth mass extinction in Earth history, which the researchers said is now under way. – American Thinker

The left doesn’t care about environmentalism.

What it does care about is class warfare, or using guilt to demand wealth and power from those who have earned it.

Race, nature, peace, drugs, homosexuality, multiculturalism, etc. are all a means to this end: smash the majority culture, destroy its leaders, and replace it with a non-culture so everyone is accepted and we can destroy the social order and take the wealth.

Pompous parades will today celebrate the event that triggered the French Revolution, that is to say, the most appalling bloodbath anterior to the Russian Revolution. Seven prisoners were released from the Bastille â€“ four counterfeiters, an accomplice to murder and two lunatics – whose return to the community was hardly beneficial. The attack on the prison, reserved for the well-off, was orchestrated by the Marquis de Sade and Camille Desmoulins on behalf of the Nine Sisters masonic lodge.

There followed the September massacres, the marriages republicains in which people of opposite sexes were stripped naked and lashed together in obscene postures before being drowned, mothers forced to watch their children being guillotined and the massacre of 400,000 Catholic royalists â€“ the majority of them women and children â€“ in La Vendee. Sounds like the perfect excuse for a celebratory knees-up.

There are two countries called France. One is the sluttish Republic â€“ â€œMarianneâ€ â€“ the other is the timeless, civilised doyen of Christendom, the nation of Clovis and St Louis, of the Valois and Bourbon kings, the Catholic and monarchic civilisation that fell with Charles X in 1830 but still defiantly survives in many enclaves. That pulse will beat quietly today while the heirs of the sans-culottes strut their stuff, proclaiming French nationalism under the figurehead of a Hungarian president and his Italian wife.

God send, at some time in the future â€“ however distant â€“ the restoration of the glittering monarchy whose downfall in blood is so vulgarly celebrated today. Long live the present-day heir of the Bourbons, the Duc dâ€™Anjou, rightful King of France. Vive Louis XX. – The Telegraph

Leftists have like their Stalinist idols erased memory and changed history.

Conservatism is a spectrum from moderate Republican beliefs through monarchism, complete with its caste system and ethno-nationalist persuasion. A true nation is consanguinous, united by values, and works together to conserve those. In that view, we are all means to an end: culture, land and heritage.

That’s too much for liberals. They want “culture” from television and fast food from exotic places. They want to destroy anything wholesome like true culture, heritage and even the land. When the land is covered by cities, they think, the inner part of the human soul that knows we are not all equal — that can be smashed, and we will live in paradise.

True, it will be a paradise-wasteland, but they are so motivated by hatred they want that more than they care about conserving wildlife.

This is why “environmentalism” is a failure. Like multiculturalism, in the hands of the left it is a weapon of class warfare and nothing more.

We face a great tragedy in our time. Ecocide is a crime that should not be forgiven. We all agree on this. We just argue over the methods. Leftists accept nothing that does not include their class warfare impetus.

It makes sense instead to look at the severity of the problem, and ask not what universals we “should” apply to everything we do, but how to solve this problem. Consequences trump methods.

But that’s a conservative value, and they will oppose it, even though it is the only way to stop the tragedy.

Communication | The Economics of Metapolitics