Steve Bannon Goes Into The Cold 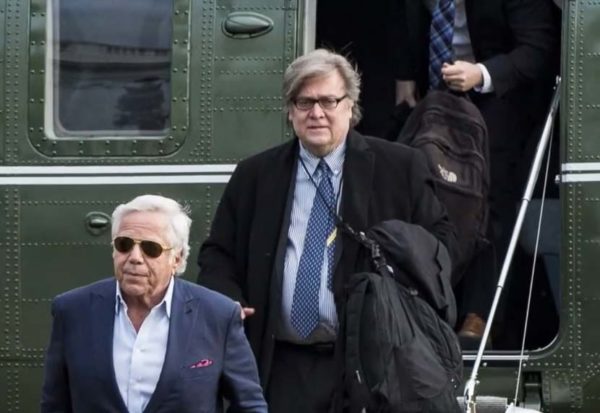 The following is entirely conjecture, but I started writing to get as close to the elusive workings of the pattern order of nature as I can and to have a great time doing it, and so, sometimes one needs to fire up the pipe, inch closer to the fire and work solely with the little grey cells.

Steve Bannon, after apparently submitting his resignation two weeks ago, giving a controversial interview a week ago, being downgraded by Trump yesterday and leaving the White House today, is making a brilliant move that is going to result in more yuge winning for Donald Trump and his team. Bannon was not fired; he chose to walk into the Cursed Earth because he has another mission.

For those that can hear, Bannon himself says exactly what is happening, but like all statements from the proficient, this is an esoteric communication that needs some reflection to understand:

Bannon says that he will return to the helm of Breitbart, the rambunctious right-wing media enterprise he ran until joining the Trump campaign as chief executive last August. At the time, the campaign was at its nadir, and Trump was trailing Hillary Clinton in the polls by double digits.

The Trump Presidency is now something else; Bannon is going to Breitbart. What the heck can this mean? First, it is clear he is correct about the Trump Presidency. They were able to run on a certain platform, unite people behind it, and make huge strides within the first year. But now, the game has changed; the President and his staff have seen new challenges that must be undertaken before he can accomplishing the remaining items on his agenda.

In other words, they succeeded at round one, and now, as with every great victory, they have uncovered a new series of challenges that were invisible back then. This leads us to the second part, which is that in the midst of a vast culture war, Bannon seems to be leaving the White House… to go back to Breitbart. He is going back into the culture side and leaving politics because he has done all that he can there.

Bannon has made a brilliant move in this respect. He has allowed himself to leave the White House under the impression that he was forced out and that he is disappointed with Trump, which sets him up to be a critic of the Presidency. That gives him two advantages: backhanded compliments, and he can agitate for Trump to go further to the Right, which makes the President appear to be responding to his constituency instead of acting of his own initiative entirely.

Backhanded compliments will be hysterical. The press does this all the time: “Well, I really don’t like this President guy, but you know he makes some good points when he talks about A, B, and C. Those really need us to look deeply into them, and his policies make sense. But otherwise, I don’t like the guy at all. Not one bit.”

While he is busy doing that, he can also take the pulpit and rant on about how Trump has failed in his mission and needs to get back to basics. From Breitbart, he can unleash a score of articles talking about how the President is not pushing hard enough for what he was elected to do, like bring back 1980s America, end immigration, exile the media to Morocco… Trump accomplished his initial promises, but the ideas behind them naturally lead to new challenges.

Instead of seeing a defection, what we are seeing here is two men separating so that they can attack a problem from different directions. At this point, Trump has uncovered the Leftist Establishment and, big surprise, it is too large to “drain the swamp” with straightforward activity. Instead, it has to be unmasked one node at a time, and its members revealed and sent packing. At the same time, the hostile media will both attack everything that Trump does with fanfare, and apparently miss the less dramatic but more important stuff he does quietly.

Remember, this is the man who deliberately mistyped the word “coffee” and had the press ranting about it for weeks. He is the master of media. He is Howard Stern plus Rush Limbaugh plus Dave Letterman. He knows how to be entertaining, and part of telling any good joke is that you have to misdirect your audience right before the punchline so that it hits them like a ton of bricks. Trump knows how to tackle these people, and so does Bannon.

Watch Breitbart zoom into the spot vacated by Fox News and expand to wider coverage of all sorts of news. My guess is that we will see a more reliable source of daily news which also hits harder on the political front, probably by looking less partisan and more critical of stupidity, sort of like The Onion if Sam Huntington were at the helm. While Trump baffles the press and subverts the Establishment from inside, Bannon will be outside attacking the press and keeping one step ahead of them, which will further ruin not just their reputation, but their utility. Why go to the press if they get the news twenty-four hours late?

As much is subtly declared in a less-than-subtle statement Bannon made to Bloomberg about his intentions:

â€œIf thereâ€™s any confusion out there, let me clear it up: Iâ€™m leaving the White House and going to war for Trump against his opponents — on Capitol Hill, in the media, and in corporate America,â€ Bannon told Bloomberg News Friday in his first public comments after his departure was announced.

Bannon led the evening editorial meeting at Breitbart, where he resumed his role as executive chairman, the website said in a statement. A person who was on the call said Bannon called on the group to “hunker down” and work like never before to advance conservative causes.

According to a person close to Bannon, he met Wednesday with conservative billionaire Robert Mercer, co-chief executive of Renaissance Technologies and a major financial supporter of both Trump and Bannonâ€™s efforts. The two mapped out a path ahead for Bannonâ€™s post-White House career and discussed how Trump could get his agenda back on track.

Since day one in office, Trump has played the Bannon card, alternately blaming him for anything controversial and giving him credit for successes. Bannon has construct an aura of mystery around himself, revealing his apocalyptic fascinations as well as his highly strategic mind. My guess is that he is using that mind now, and he is not stepping away from the Trump effort, but stepping up to fulfill a new role that it needs.

As both Trump and Bannon are diligent but flexible strategists and planners, this means that Trump has his agenda set for the next couple terms, and is going to begin acting as he usually does, which is from the bottom up, removing the supports upon which his opposition depend, and then applying pressure indirectly while giving them an easy option that either fulfills his needs or sabotages them in order to create an opening for which he, conveniently, has a method of making things better.

Conservatives should take heart. Trump knew long before he got into office that he would have to deceive, misdirect, deflect, conceal, camouflage, downplay, distort and otherwise act through Odysseus-style canniness instead of trying to go in low and slow like a softball. Bannon and Trump have been engaged in what I would guess is several hours of think tank style strategizing since the election, and Trump has achieved more for conservatives in the last six months than the last two conservative presidents and the half-dozen before them.

Things are looking up. But for that to happen, first there has to be obscurity and myth, and from that, fire and steel.

White Sharia Will Make You Dumb | If We Are Going to Tear Down Statues, Let Us Start With the Founding Fathers