If We Are Going to Tear Down Statues, Let Us Start With the Founding Fathers 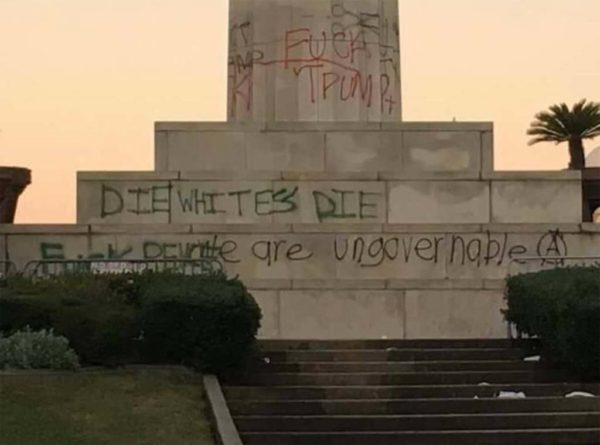 Deep in study of the Tao, in a meditation so consuming that I was unaware of the possibility of an ego, I was able to channel the mental state (in lieu of soul) of the SJW. From that came this realization: we must tear down all the statues, kill all the white people, and erase their laws, culture, language and image, if we are to do social justice in the aftermath of Charlottesville.

The entire premise behind the Alt-Reich invasion of hallowed liberal ground involved statues of dead, pale-penised malefactors that dared take up arms against social justice. Yet this entire event was shot through with a sickening irony. Many of the righteous hordes that protested this imposition attended a certain nearby university that frequently calls itself Mr. Jefferson’s University.

I see no other path to social justice except the banning of UVA from any further operation. Its was founded thanks to the wealth of an evil white slave master who was cisgendered, to boot! Its architectural centerpiece, The Rotunda, is a veritable Parthenon of European heteronormative racial, sexual and cultural oppression. Replacing it with a round pygmy hut would show proper multicultural intersectionalism.

Only when UVA has been rechristened The Rainbow Institute and when Caucasoids are forced to walk around all day in chains will true social justice be done in Charlottesville. All the statues of Honkey Tom must be torn down and smashed. No party founded by this Evil White Albanoid can be allowed to participate in future US Elections. Oh, wait…

Andrew Jackson was just as bad. He even mistreated Cherokees and other Native Amerikans. We can’t let any party he founded…Dammit, man! What happened to that history I used to own? Whig History is supposed to memory-hole inconvenient truth better than that.

If in 2020 we can elect a suitable candidate like Mark Zuckerberg or Bernie Sanders, people who lionize Whites are going to pay. We are going to erase them all. Whites have power, ergo are racist, and so we must remove all evidence of this historical stain. All of the Founding Fathers enjoyed white privilege, and none of them thought to take the time to enumerate rights for non-whites, transgender people and obese blue-haired snowflakes, so they must all burn.

Our money will have Dave Chappelle, K’naan and Nas on it instead of these white supremacist proto-Nazi homophobes. We will have statues of Beyonce, Janet Jackson and Whitney Houston around the capitol, and paint the White House a comfortable brown. Then we can get started on renaming every street with a name in a white language, finding new things to call the states instead of those fussy old English names, and maybe even rechristen the country as the United People’s Rainbow Republic.

If Charlottesville taught us one thing, it is that whites are inherently neo-Nazi. Every one of them is an affront to people of color and the multiple genders of our new world order. By just being what they are, whites remind us of the bad old days of white supremacy, and we cannot be sure they are not planning to do it again.

Perhaps we will be forced to remove them from public view. We can set up large settlements for them, with swimming pools and tennis courts, where they can sleep in bunk beds and have the inevitable lice removed with delousing chambers. They can work for us, making products for people of color, to expunge their guilt for not only what their ancestors did, but for offending us with their white heterosexualness.

Only when all traces of whiteness are gone will we be safe. Only when there are no memories of whites will we be equal. The existence of white people is oppression to us, and we would be justified in removing every one of. Die whites die. It does not matter which statue we remove, so long as it is a white person we are erasing. Wherever we start, we have to get them all, and then we can be free.