Spymaster: My Thirty-Two Years in Intelligence and Espionage Against the West by Oleg Kalugin (1994) 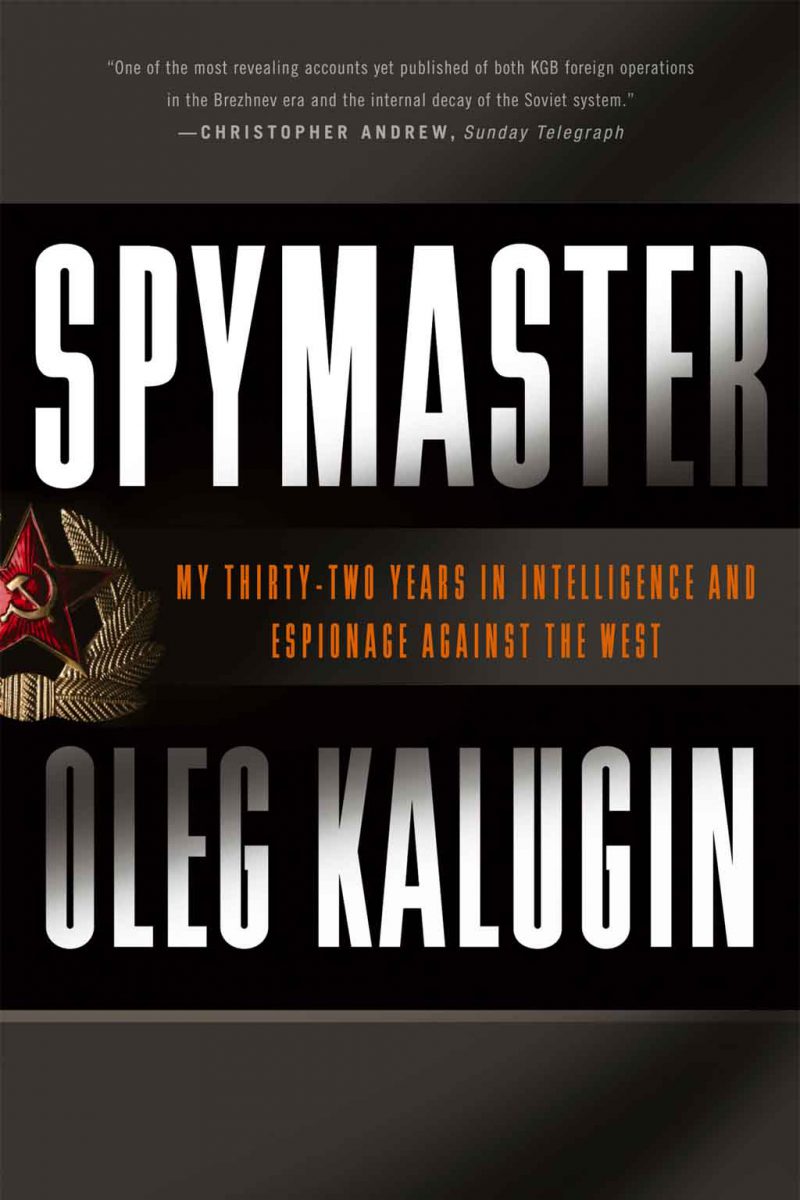 Spymaster: My Thirty-Two Years in Intelligence and Espionage Against the West
By Oleg Kalugin
480 pages, Basic Books, $17

A zebra does not change his stripes. You can paint him, or bleach him, but underneath the surface pigment, the stripes will remain, and so will the behaviors. A zebra with a Harvard degree is just a well-educated zebra.

Oleg Kalugin wrote Spymaster: My Thirty-Two Years in Intelligence and Espionage Against the West ostensibly to describe the techniques of the primary adversary to the United States during the Cold War, but more importantly, as a warning.

In 1990, fearful of the downfall of the Soviet system, the KGB started a project to protect party finances from dangerously unpredictable developments in the country. A new supersecret unit was formed inside the intelligence directorate to organize the transfer of Party money abroad into special accounts of newly formed commercial and banking enterprises. The CEOs of these ventures would become Party and KGB officials. In fact, the launching of first joint ventures and numerous export-import banks in Russia was part ofthe plan hatched by the KGB.

In 1991, the KGB reported to the Politburo about its efforts to launch nearly six hundred joint ventures run by “retired” KGB officers. Many of these entities began their operations in the Baltic States and in countries such as India and Israel. After the unsuccessful coupin 1991, the penetration of commercial and banking systems accelerated. Later, companies like Seabeco, Olby, and Nordex, sponsored and heavily infiltrated by KGB operatives, would acquire scandalous international reputations. (423-424)

Reading this carefully, we see that the KGB never went away. Much like the Ohkrana became the NKVD which became KGB and GRU, the current Foreign Intelligence Service (SVR) carries on the tradition of the past, but taking a cue from the West, it has privatized itself so that it can rule from darkness and be beyond criticism, since market forces will be blamed for its manipulations, much as how in the West people blame “capitalism” for the crises created by unions, rent control, immigration, entitlements, and other government policies.

Kalugin found himself uniquely positioned to write this memoir since he was highly placed in the KGB and familiar with operations in the West. Beginning life as a true believer in the promises of Communism, he lost faith over many decades.

Eventually becoming a reformer, he found himself caught between an Old Guard that would not deviate from essentially a Stalinist path, and other reformers who ultimately like Putin wanted simply to privatize the Soviet Union in order to allow the KGB to live on in a new form, since the KGB is the lynchpin of the power structure in Russia.

By 1980, only the most doddering Party bosses still believed the rubbish about the Soviet Union building a truly egalitarian system. Our Communism had degenerated over decades into a farce, a system in which the Party elite divided up the spoils and the plum jobs while the masses were left with cheap vodka, fatty sausage, and the chance to go once a year to a third-rate resort on the Black Sea. As foreign counter-intelligence chief, I was frequently forced to hire inferior officers because they were relatives or friends of Party big shots. (247)

He nonetheless continued to expand his career as a Soviet spy in the United States, passing along diplomatic and military information from highly-placed sources including John Anthony Walker, who compromised multiple US operations for KGB payola.

Eventually, his political enemies caught up with him and engineered a false accusation of disloyalty against him based on a dubious investigation of one of the agents he used against America, a Russian who worked for the American aeronautics industry.

This led to his retirement from the KGB, which cut him loose just as the power structure in the Soviet Union was crumbling, and as the disaster became apparent, he joined the rising reform movement.

Kalugin does not properly belong to the “dissident” category; he was, until the system utterly failed, still a believer in the promise of Socialism and the hope of a human Utopia.

But no amount of reading could prepare me for the reality of New York City, with its stark contrasts of wealth and poverty. We in the Soviet Union had been deluged with propaganda about America’s ghettos, its unemployed, its enormous racial problems. As I walked through Harlem, the Bowery, the Bronx, and other poor areas of the city, however, I was stunned that such a wealthy society would do so little to eradicate this pervasive poverty. My first year in New York actually strengthened my faith in Communism. I believed that although we were far poorer than the United States, we at least tried to offer all our citizens a decent level of education, housing, and health care. (28)

His migration away from belief in Communism moved him toward acceptance that for a system to be prosperous, it cannot “offer all of [its] citizens a decent level of education, housing, and health care.” Over time, he became cynical about the high social cost of having an all-powerful government and centralized economy.

However, this only touched Kalugin when he retired, which tells us much about the caveats we must remember while reading this book. He is pro-KGB up through the time of his personal disenfranchisement.

He also gives us an insightful glimpse into the mind of the citizen of an ideological total state, pointing out that allegiance comes not through belief in the ideology, but through personal careerism.

I suppose that had I been bolder, had I been more of a dissident, I might have resigned shortly after Soviet tanks rolled into Prague. But I was no dissident, no Sakharov or Solzhenitsyn. I was a product of the system, a patriot, and defection was absolutely out of the question. I suppose I also was a slave to my ambitions, and to the illusion that this system — despite the increasing proliferation of Communist Party hacks at all levels — could be reformed. So I stayed in the KGB; indeed, I continued to rise rapidly through its ranks. I was a professional, and I knew we were involved in a bitter power struggle with the United States. I was not prepared, despite the colossal blunder of Czechoslovakia, to abandon my country or its Communist system. (121)

In such systems, individualism — the innovation of the Enlightenment,™ and the hallmark of modernity — serves to anchor the citizen to the system. Simply put, they follow for personal reward, and adapt to totalitarianism as an inconvenience that threatens their careers.

When the KGB threatened Kalugin’s career, he turned on it. In the same way, in modern America, as long as the money flows, people are comfortable accepting the absurdity of democracy, equality, diversity, and entitlements.

Kalugin knew from an early age that he was dealing with a flawed system, but could not grasp the enormity of it because he was too busy cleverly adapting to it, finding that as long as he could get ahead in it, its failures did not bother him.

Sozinov finally let me go, apparently satisfied with my openness. I didn’t walk away from our talk lamenting that I lived in a totalitarian system. I merely told myself that the next time I listened to shortwave radio broadcasts, I would have to be more discreet. (12)

In death of the author theory, analysts consider that writers do not consciously understand what they write about, but much like in a dream, the smaller themes tell the bigger story and the ostensible topic may be irrelevant.

Perhaps Kalugin thinks he was writing about the Soviet Union, but in my view, this book is about the USA and the failure of its system. Our careerism may be even worse than theirs, so we may put up with more before we fall.

Written sparsely but with intense technical detail and a good ear for historical and social context, Spymaster: My Thirty-Two Years in Intelligence and Espionage Against the West belongs in the toolbox of anyone trying to understand the Soviet collapse and the forthcoming collapse of Late Stage Democracy.