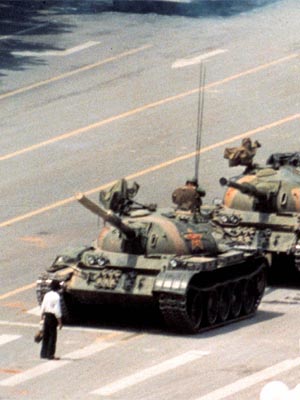 There will always be a lot of despair in the world. Heck, there’s a lot of people I wish would despair and just quit doing whatever insane or psychotic stuff they’re doing.

But what bugs me is when good people face despair, not of the temporary kind, but a prolonged belief in the inefficacy of their actions and beliefs. That’s a kind of fatalism: no matter what you realize, or what you do, the world won’t understand and your actions will have no lasting effect.

It’s enough to make you want to give up, go back to the couch, order the 500-channel cable and put in for welfare. Shut the door; life over.

All of the people in this world that I’ve known who I would consider if not evil, at least bad, count on good people to do this. The killers count on you to not notice the roll of duct tape, plastic bags and clip-ties in the trunk. The sociopaths count on you to never call them out on their bad behavior.

Dealing with humans is similar.

The four stages of acceptance:

When you stand up to the human stampede, you will face a similar cycle.

They will react in shock, call you ignorant, imply that you will die a friendless destitute virgin if you believe such a thing, blame your lack of a mother, talk about your moral and mental deficiencies, attribute this statement to your need to compensate (cognitive dissonance) for failure, or track it to some biological or sexual urging as if to suggest it has no basis.

They will then sit back on their haunches and wait.

Most people — and by this I mean almost literally five nines, or 99.999% — will at this point start to panic. The weight of social disapproval is too much. They start to fear what life is like when no one likes them. Where will they go?

So they recant, or lessen the statement, or change the topic, or otherwise bend over and show their neck to the surrounding herd, so that it’s clear they are not challenging the established order.

A very rare few will instead stand up to the herd and say, “No, that’s what I said, and it’s true, and here’s why.”

The hilarious thing is that at that point, the Crowd surrounding loses its integrity; it can feel some members slipping away.

For many, direct confrontation is not part of the plan; for others, their witch hunt mojo has been disrupted by the fact that they got a clear, logical, unemotional and direct response. They back down from that challenge. They were hoping to find a dispirited, cowed and doubt-ridden adversary. Instead they found a vital one.

But all are suddenly aware that they’re no longer acting as one. From now on, they have to act as a fragment of the group, which means other fragments of the group can turn on them. A crowd is only safe when in unison; the instant some drop out, there’s actual risk to the members of the crowd, so they slink away.

If you hold your ground, you’ll split the stampede.

Humans tend toward intellectual stampedes around any unpleasant, difficult, upsetting or unfathomable issues. Their anger at the world for being inscrutable is immediately displaced and projected onto the messenger.

And even if they don’t turn on you deliberately, they can simply crush you with the weight of their need, and their panic, doubt and oblivion.

After I blogged about the Love Parade stampede, several readers wrote in and said that they had been on the scene, and that there had been no panic at all — people had been slowly crushed merely by the remorseless crush of the crowd. Some news outlets have reported that the Cambodian tragedy began when some of the revelers collapsed, triggering panic among those nearby. Perhaps these first fatalities were a result of simple mechanical force, which quickly worsened once the crowd realized how desperate their situation had become.

So if you find yourself in the middle of a stampede, what should you do? Unfortunately, once you’re surrounded by the remorseless pressure of hundreds of other bodies, you may be physically incapable of any action at all. A crowd that’s only 6 or 7 people deep can exert 1000 pounds of pressure, enough to topple brick walls and bend metal stanchions. – Psychology Today

Social fear is how we control each other. The age-old promise: If you don’t do what I say, I’ll tell the others, and then no one will like you!

They use this threat even for things to which it does not apply. The Crowd doesn’t care about most things, unless whipped into a frenzy by a demagogue.

Most conservatives for example would not care about abortion, other than that it not happen near their homes, because they’re used to murder and death occurring throughout the world. Most liberals would not care about civil rights except that they’ve been whipped into a frenzy. Most voters have no awareness of the budget deficit, but every four years when it becomes an issue, suddenly they’re experts.

All power in the modern time comes from demagogues and other sociopaths whipping the Crowd into a frenzy over something it knows nothing about.

It takes a brave person to stand up and split the herd, but when one person does it, the rest of them see that the stampede backs down easily — all it takes is an outstretched hand.

When the others see that one person can stand up to the herd, the word gets around. Air breathes freely again. The tyranny of herd opinion has forever been dissolved.

Sacred cow: culpability | Learning to stand up for ourselves