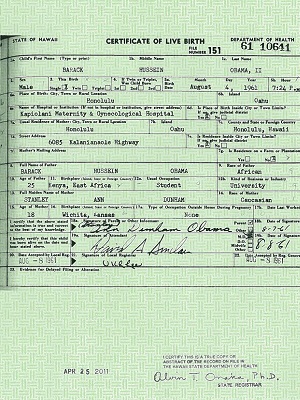 Politics is a wily game of misleading enough people with too little information that they support too little reality and just enough politics, thus channeling you into power:

It’s surreal and weird and faintly ridiculous that it’s come to this. But this morning the White House caught the press corps seriously off guard by handing out copies of the anti-Holy Grail of birtherism, the fabled ‘long form’ birth certificate. And here’s the actual birth certificate.

Late Update: Apparently the president is actually going to make a statement shortly affirming his birth in the US, presumably because the release of the long form document might reduce the level of lunatic frivolity in the public square and they feel the need to bring it back up to make things even more ridiculous. – Moonbats

This is political theatre at its finest.

The hype builds, the orchestra swells, the bubbling murmur of the crowd reaches a crescendo…

Candidate Obama reaches behind his tuxedo, flips forward a top-hat, and from it yanks the birth-certificate!

But this is just theatre. It’s there to distract us from other questions.

For example, why didn’t he just release this form in the first place? If it’s that easy, that is.

And also, what about his other records? The missing dissertation, missing writing samples, few exception ideological allies who remember him from school?

Why no investigation into the blatant corruption he oversaw during his tenure in one of America’s most corrupt cities?

Let’s make sure we focus on the birth certificate.

I guess my attitude toward the Birthers has always been that they have a valid question which should have been addressed quickly and quietly; in addition, they’re (like most people) aware of something out of place, but thanks to media brainwashing and other confusions, can’t quite articulate it.

I’ll articulate it: we elected Obama because he was black.

A white candidate with the same views would have gotten nowhere near the coverage, or concern.

Obama, like Clinton before him, represented racial reconciliation, which is a form of appeasement.

“If we give everyone the wealth, and spread it around equally, there will be no cause for disagreement and we will live in peace.”

Be wary: this article is racist — against white people.

Only a population of people who have inherited such wealth their jobs are irrelevant could believe such tripe. The suburbanites are not the problem; it’s the city-dwelling people who have easy jobs (working in IT is easy, working in middle-management is easy, being a counselor, teacher, clerk and/or “artist” is easy) who believe in correspondingly easy solutions.

To them, life is a matter of moving from the Xbox to the workplace, and they view everything in both places as being about them. Their desires. Their fascinating life histories. Their amazing witty insights. To these people, the whole world exists to serve their egos.

As a result, when confronted with a real problem, they space out. They start demanding solutions on the level of effect. “I don’t know how to do it, just get rid of this bad thing!” — and they aren’t witty enough to know that every bad thing exists because there wasn’t a good thing to crowd it out.

For example, if the kids in your town are on meth, it’s probably because they are bored, have little future, have a disorganized society with no sense of meaning, and come from broken homes. A minority will always use whatever crazy drugs they can find, but when it’s more than that, you have to ask yourself: what good thing is missing, so that this bad thing can surge in and take over?

White America is predominantly clustered in the cities, working easy office jobs and thinking first and foremost of how to entertain itself, appear more important than those Joneses it has been keeping up with in various forms since 1944, flatter its clients and friends, and justify its own sloth, greed and compulsion to itself.

White America just loves distractions such as race, because they’re the equivalent of reading an intense fantasy novel. Somewhere out there, a battle of good and evil is being fought… in the meantime, in my townhome in the city, nothing will ever change no matter what I do. So toss out those packets of money! Beat down these arrogant upstarts who say that diversity cannot work!

And then go back to work, of course, because the damaged modern ego needs to feel a sense of external purpose and self-esteem boost that a job entails.

We are awash in bad things, but we can ignore them for as long as the private security guards, imported illegal alien lawn service, and helpful staff in the distant office keep the townhome and jobs afloat… no matter what we do, we think, there will always be bread at the grocery store, a friendly pub, 500-channel cable, and people of the right caliber to bother spending your time or lifetime with.

This viewpoint is oblivious to cause and effect logic, which states that if you make a change somewhere, it’s going to cause some effects, meaning that in turn it will alter your environment. It may take a while, but it will start a wave that will eventually wash up on the shore of even your exclusive townhome.

Take a look here at a video in which, inside a McDonald’s, a couple of black girls beat a white woman to the point of a seizure. The black manager makes a feeble half-attempt at helping but ultimately does nothing, while black employees either film, laugh, or tell the perps to leave because the cops are coming. (Via Roissy every non-leftist website in the universe.)

Meanwhile, a bunch of people are quite exercised over an Orange County, CA, politician who sent an email with a photoshopped image of Obama as a chimpanzee. When will white Americans be allowed to become exercised over the wave of violent crime committed by blacks on a daily basis? That’s a bit different and perhaps a touch more serious than comparing the president to a chimp.

Black crime is an open secret that the media generally doesn’t touch, since journalists are normally too busy accusing whites of racism. – Mangan’s Adventures in Reaction

It’s unwise to put much stock into single incidents, but the man has a point. One person said something cruel; others beat someone to a pulp. And which we do fixate on? — the one that fits into our narrative of good versus evil, which we’ve dumbed down to make it convenient to observe from our couches, assuming that nothing will change.

Sadly, that’s not true. Our pile of bad decisions grows bigger every year, and accelerates as we are less willing to look at reality itself. Too many dumb white people are out there feeling like super-educated geniuses because they have the “right” political opinions, namely favoring the underdog. When these opinions lead to enough bad decisions, it will blow up in their faces, and they will blame someone — anyone — else in order to dodge the blame.

Before you get too distracted by this moonbattery over the birth certificate, or any of the other political theatre that democrats love, recognize that this is just symbol-play and demagoguery. They’re manipulating a captive audience of Dunning-Kruger status-climbing useful idiots, and they are oblivious to the damage they do.