Some Of My Best Friends Are Mutually Tolerant 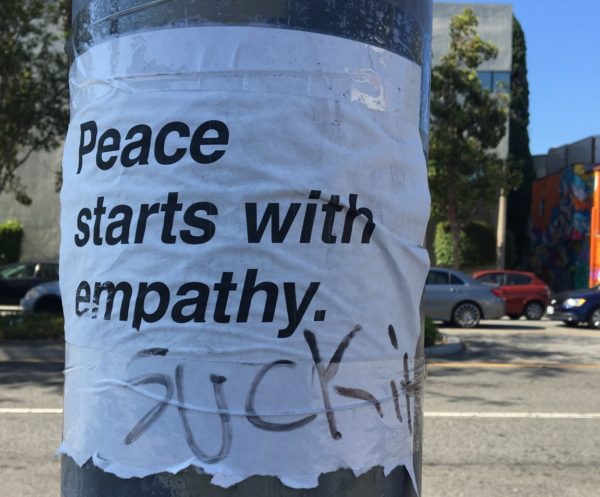 When somebody says, “Why, some of my best friends are _________,” it’s supposed to trigger automatic, contemptuous rejection. The objective of this suggestion-implanted-by-repetition — repetition is not the mother of learning; repetition is the mother of operant conditioning — is the unthinking, categorical dismissal of the idea that any other value system than the one being implanted might be fundamentally humane and decent.

In other words, it is mind control. This mind control does not require fancy sci-fi gadgets to control our minds. It works through social pressure, just like how teenagers con each other into doing dangerous and stupid things as groups. “You don’t want to smoke this tasty weed? What are you, afraid?” The setup is easy and known to any con-man: set up something people do not want to be, and then categorize avoidance of what you want as that bad thing.

Conditioning is central to democracy (“Remember the Maine!”). True Believers must dominate all discussion. That way they don’t risk people encountering anything that might get them thinking along other-than-prescribed lines and coming to unsanctioned conclusions. The point is to shepherd people in the same direction without them realizing that they are being herded. They think it was their own choice, and they feel good about it because they look good to others.

As it so happens, one of my best friends is a guy who “likes” guys. You know what I mean, because “likes” even gets the air quotes around it when you say it out loud. This was a later discovery for me. Big whoop. He could “like” goats for all I care. It’s his dime that I’ve got no nickel in, way off far away where I don’t have to concern myself with it.

What people do behind closed doors is their business; that’s what doors are for. Rabble-rousing demagogues notwithstanding, that’s pretty much the way it’s always been. People knew that James Buchanan (the president before Lincoln) was “that way.” When he lost his bosom buddy, his friends repeatedly tried to set him up with other guys they knew who shared his . . . whatever you’d call it. And in that age when women’s official options were either marriage or abstinence, there were a truly surprising number of ladies who spent their lives living with close lady friends. People even light-heartedly referred to these as “Boston Marriages.”

The difference was that these sexual minorities were not putting their preferences up in peoples’ faces, and those around them returned the favor by not taking it into account, let alone ostracizing them. Oscar Wilde, for Pete’s sake, with his “I won’t miss England, but I hate to leave my friends behind” double entendre was speaking the truth in plain sight: only those who already knew of his proclivities would get the joke, and to everyone else it was harmless.

But “out of sight, out of mind / live and let live” — a sound, fundamentally humane perspective — isn’t good enough for the Bolsheviks. Today we’re treated to unsolicited displays of flagrant, flamboyant, narcissistic exhibitionism. I’m here and I’m queer. Deal with it. And if your response is anything but enthusiastic, unfeigned acceptance, that means you’re a depraved hater of everything good and decent in the world. Because if you were NICE, you’d repudiate your inmost convictions and welcome me with open arms (megalomania much?). How could you not go along with that? “Everybody else” does! Don’t you watch (enough) TV?

I’ve got a great, new, even revolutionary idea: you get out of my face with your bedroom activities, and I won’t be on your case about it. Women have their secrets – make that one of yours. At least the Mormons and Jehovah’s Witness missionaries are polite and seem like decent people. Figure you could pull that off? If you can, the quality of both our lives will go up. A real win-win proposition. You cool it with the postmodernist penis nonsense and I’ll focus on your good points. Fair enough?

The Curse Of Universalism | Outlaw The Teaching Of Coding To Children