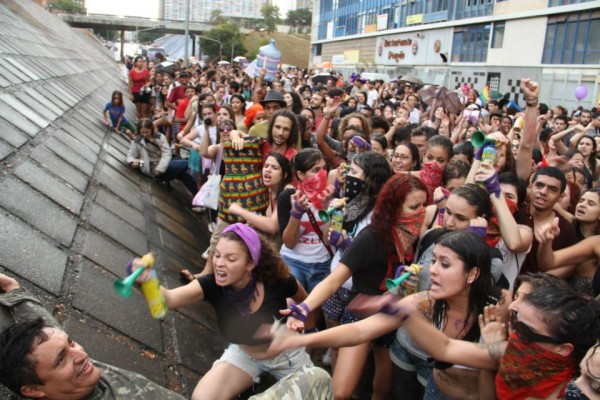 The most interesting aspect of the New Right is that, in following Vaclav Havel, it has diagnosed “soft totalitarianism”: the absolute state administered not by its police force, but by its citizens. Citizens turn each other in for rewards, whether official or simply social.

Soft social forces like this can work in a positive way. If there is a neighborhood pedophile, having people come together and remove that person is a benefit to all. However, we switched to organized government long ago because vigilante justice and mob retribution are too often misused or inaccurate, as happened in the Salem witch trial or when online user groups play detective.

In the case of soft totalitarianism however the subject matter is not something as natural as beating down predators. Rather it is the hunting down and elimination of all “politically incorrect” viewpoints. Consider the term “political correctness”: it literally means adjusting everything we say and do to fit with the political ideology of our time. It is the opposite of “think for yourself,” or even “think.” It is the jackboot slamming on the face of humanity, but within our own minds. Why enforce with police, or even courts, when you can get the population to panic instead and flee from any “bad” thoughts, flinging feces at the person implicated?

Soft totalitarianism succeeds because it taps into our instincts going back to our glorious Simian heritage. Monkeys live in “troops,” or small groups like tribes but less strictly associated with heritage. If one monkey comes down with a disease, the other monkeys will throw stones at it and drive it out of the troop. Thus in monkey society, the primary social concern is: where do I rank in the troop, aka how close am I to getting thrown out? Humans have adopted this into in-group/out-group logic within a modern society united by nothing but political-economic ideology; when people have nothing in common with each other, the instant the crowd turns on someone they will have no compunction about destroying that person.

And this requires zero intervention from government. It’s “freedom,” after all, to form a mob and go after people so long as you don’t literally murder them. This is what happened to Mozilla CEO Brendan Eich, who has driven out of the troop not for hating gays, but for not supporting gay marriage. He did nothing affirmative against gays; he denied that they should have a right historically extended to heterosexuals. The Crowd gathered and deposed him. From Mozilla’s press release:

Mozilla prides itself on being held to a different standard and, this past week, we didn’t live up to it. We know why people are hurt and angry, and they are right: it’s because we haven’t stayed true to ourselves.

We didn’t act like you’d expect Mozilla to act. We didn’t move fast enough to engage with people once the controversy started. We’re sorry. We must do better.

Brendan Eich has chosen to step down from his role as CEO. He’s made this decision for Mozilla and our community.

Mozilla believes both in equality and freedom of speech. Equality is necessary for meaningful speech. And you need free speech to fight for equality. Figuring out how to stand for both at the same time can be hard.

The rest is more of the same groveling.

What does soft totalitarianism mean?

Second, it means that our society is entirely inwardly-focused. Those who can create things, like Brendan Eich who guided the development of JavaScript, are secondary to those with the right opinions. The resulting hybrid of corruption and ideological nepotism ensures that soon we will have Beautiful People in our elites everywhere, but that they will be useless. Sure, they can memorize instructions and repeat variations on actions from the past. That’s why they’re all so good at developing web apps despite the crushing tedium of doing so. But when it comes to making strategy decisions, or inventing actual new technology, they will be lost. We have replaced the innovators and their politically incorrect opinions with a herd of politically correct but fundamentally useless people.

If you wonder what brings down empires, it is this internal policing of reality. The Soviet Union fell because it was politically incorrect to say that fewer beets had been grown that what the Five Year Plan said should be grown, thus people simply lied. They faked it. Ancient Greece faded from history because they executed philosophers who spoke up for the truth when it was politically incorrect. Ancient Rome became decadent and unable to defend itself because of its own internal system of ideological nepotism based on praising Rome, rather than acknowledging its problems and fixing them. Those who spotted problems were attacked in a “kill the messenger” fashion. The same is true here.

Brendan Eich was a messenger for our society. He dared to differ from the herd on a few crucial points, and for one of those, they attempted to destroy him. When this sort of behavior becomes the norm, you have a society that insists on programming itself toward conformity and ignoring serious warnings about its socially-correct but realistically-incorrect ideals. At that point, the only missing ingredient is time, as the nation waits for the Vandals to finally appear and enforce the reality principle with swords and fire.

Waking from the dream | Free will and fate