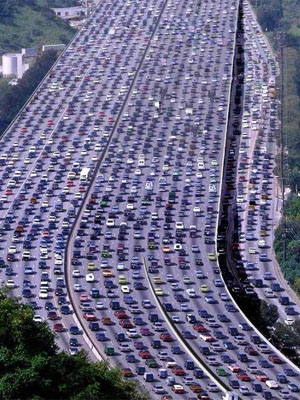 You scrimp and save, struggle all your life to get ahead, fight hard every day and then some day after decades of battle you wake up and find yourself sitting on a pile of money with no cares in the world.

What do you do then?

The answer for most people is “I don’t know.” When they retire, they have a sudden voice. They’re accustomed to fighting it out at the job. It’s their identity. It keeps them busy. Although they complained about it for the first 30 years, they came to depend on it, so now there’s this huge void.

If you look at wealthier societies worldwide, you can see the same pattern in operation. They struggle for generations to get wealthy and when they do, an anomic misery sets in. There is no longer a purpose to life, it seems, so they try to invent one through empty sex, drinking too much, lots of toys, and importing third-world labor so the original citizens can afford luxuries.

And yet all is in vain. They find no meaning in this because they keep doing it, exhausted and on the other hand seemingly tirelessly, hoping for different results. It’s not that they’re pathological, and expect different results. They simply have no idea what else they would do.

In this we can see the paradox of advanced societies. During those years of struggle, they build up massive intellectual capital, including complex systems of laws and customs for business. Eventually, these so clearly define society that the only variations occur in the details, not at the larger level of making decisions that involve elses.

This leaves the people stranded. The tool has become the master. The game has become the quest. There is no goal, and therefore no meaning, but there are things to uphold. Thousands and thousands of them: laws, appearances, insurance bills, and numerous other complex but unfulfilling tasks. The mania for comfort and security has obliterated the ability to be flexible.

Modern societies make us fat and not lazy so much as emotionally exhausted. We give up on the values that guided us through harder ages. We find nothing to replace them. Coming up with a new goal would endanger the comfort of others, who are still fuzzy about goals but want that security and comfort. They rebel. No one can change anything. The vortex draws us in, and soon we start to exterminate ourselves.

It begins with mild depravities. Just enough fetish and transgression to whet the appetite, then go back to normal life. But others watch, including the next generation. They take it further. Soon it’s not enough to dip your toe in rebellion, but a full on revolution is required. It becomes hip to hate your own society.

Looking over it, you can find few reasons not to hate it. Shopping malls replace churches and forests, cubicle farms replace open communities and history. Values systems die because of their incompatibility with commerce and universal sociability. Cuisine becomes junk food, national pride rooting for a football team, and jobs are jails and home life is even more fractured.

When you replace your souls with the process that was supposed to protect them, you’ve gone to the far side of a cycle. The only solution is to hurry (run don’t walk) back to the start, when a few people came together and agreed to build a massive civilization, and defined their values system as the way they’d accomplish these goals. Then there was meaning. Now there is only self-hatred, until we change it.