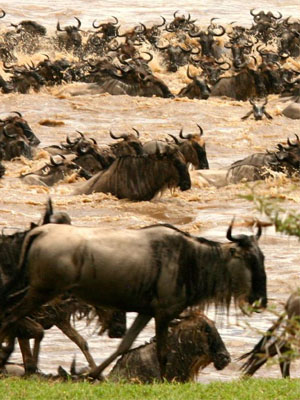 Modern politics forces people into polarity. This is not an issue of left-right, but really a question of “what issue will decide the election?”

We tend to pick politicians, and vote for plans, based on a single consideration at a time. This is part of the way group dynamics work: in order to get change, we need to get a lot of people to be repeating the same idea at once, and to do that, we need to distill all of politics down to a single yes/no question.

Politicians in democracies live “by the issues” as a result, knowing that for each yes or no they gain or lose a certain percentage of the electorate (and it’s unclear how many of those will actually show up to vote). For them to succeed, they have to find enough of these to win.

However, it still means that one issue will most likely be decisive. Each politician will have some guaranteed wins, but then there will be one issue that is in contention that will complete the majority they need to win.

This makes voting useless because at this point, the choice of the issues is defined by what the politicians need to talk about, not what’s relevant. Depending on which issues they focus on, voters will be forced to choose between one or the other of these decisive issues.

In turn, that means the election is swung by the issues. In other words, it is won or lost for each side before it begins, based on which issues end up being chosen as the battleground. Not surprisingly, democratic politicians quickly develop a strategy for this.

This strategy is a human analogue to a stampede. In a stampede, animals panic because of a threat and run away from it; in the human world, our panic causes us to join together into a mob and rush at the threat with torches, pitchforks, shotguns and baseball bats.

What politicians like to do is create a “hive mind,” or huge group of people “buzzing” the same message or idea, so that these people identify a certain issue as one they need in the election. If the politician picks correctly, this issue becomes an election winner.

The hive-mind stirs up panic, rage and righteous indignation in people and so not only gives them a feeling of purpose, but by playing into their anger, creates an addictive cycle of retribution and injury. Like sadomasochism, this cycle starts with an injury and then allows retribution for that injury which conveys power, which soon makes the powerless addicted to being injured. The victimhood mania grows.

Hive-minds are most effective when the issue involves an individual or group of individuals who have been victimized for this reason. It works even better if they’re able to attribute the reason for this injury not to a sensible policy, but to some form of vendetta, personal dislike or bigotry on the part of the other side.

For example, if the other side wants to build a new sewage-treatment plant, you can try to fight it on cost, but it’s more effective to argue that it “harms the poor” and/or has disproportionate effect on recognized minority groups. This is more electable than the actual reason people might oppose it, which is that the money doesn’t go to their constituents or they’re afraid it will lower their housing values.

When a hive-mind gets mobilized, the resulting ceremony is not unlike the Two Minutes Hate from George Orwell’s 1984. The group assembles and they talk about how evil the enemy is, how horrible they are, and how they must be crushed, and then they do something fascinating. They slowly equalize their speech. They might have come in using different words, rhythms and phrases to describe the enemy, but when they leave, their chanting roughly the same thing in synchronization.

Hive-minds are massively effective because they are deconstructive. They require zero knowledge of politics, or anything really. All you must do is be outraged by some effect. You don’t need to know how to do something better; you just need a “plausible” (and that term is flexible) alternative to what’s being done. You don’t need to think through how it would work in conjunction with the rest of the social order, or long-term effects. It’s an outrage right now. It’s like a child screaming that something isn’t fair, the rage of a barroom drunk, or the panic of a herd.

Interestingly, hive-minds do not benefit one group, which is the majority. A majority is not based upon issues, but a single issue, which is maintenance of the type of society that has traditionally benefited them. Since such a society is based on the learning of the past, they’re defending a whole thing, or a compilation of interrelated knowledge. Deconstruction attacks that interrelation and replaces it with social chaos.

Then again, that’s the point. The hive-mind is a therapy session for the under-confident and possibly self-hating. It gives them a purpose, and meaning, for long enough to accomplish its goal. Like all good circular logic, it involves people coming together to beat down the token enemy and drown them out with greater volume, so that everyone can look around and claim that no one sensible could disagree. Then they go out to make it happen.

Democracy’s originators probably never envisioned this type of end result for that political system, but by removing any focal point above the average (the “equality line”), they have reduced society to a circular self-reference. As a result, hive-minds rule the day and any longer-term perspective is conveniently forgotten.