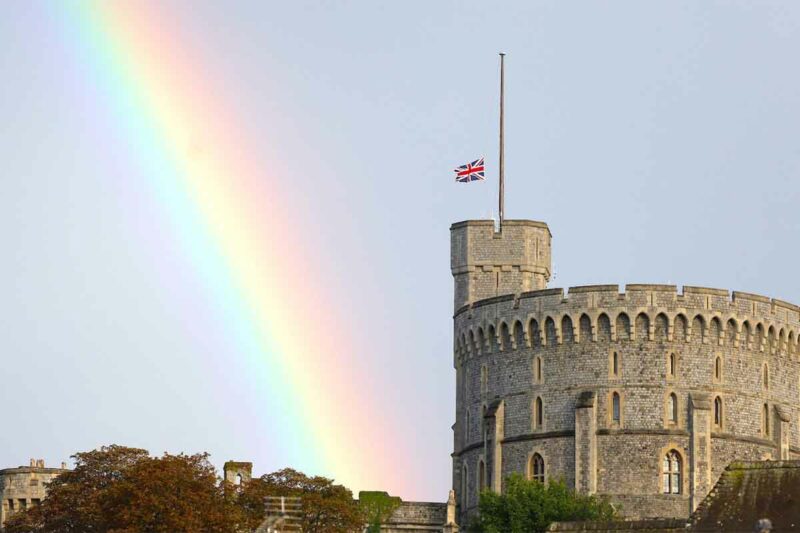 Loss of a monarch reveals a nation. If it has some spirit left, it admits that this figurehead leader in fact embodied it as a people and showed it the hopeful areas of potential growth that it could explore. It sees the beauty of the monarchy as, unlike democracy, not conformist obligation but a sense of participation.

With a monarch, you have a caste that leads by example and decision that has grown out of the organic population and culture. They do not, as democratic leaders do, choose the “pragmatic” compromise out of known decisions; they invent new paths while sticking to tried and true, time-honored values.

Queen Elizabeth chose for the hour of her death the lowest point of democracy in recent memory. The world wars have receded in our consciousness, all of our modern miracles have reversed themselves, and COVID-19 showed us the self-serving incompetence of the bureaucrats and politicians our “meritocracy” and elections have produced.

As the West faces the downfall of the Regime, those who support the failing system become more strident and flamboyant in their assertion that anyone who sees that the system is failing is in fact a very bad person. This creates a fanatical group of Leftists hellbent on seizing power before the whole house goes up in flames.

The rest of us are sitting around, finally wondering about our assumptions. Is it true, really, that democracy is the best system? Are we really doing good by taxing people to give money to the dysfunctional? Can humanity expand to ten billion people without exterminating its ecosystems?

Monarchism rises as people look at politics with fatigue. No matter what is done, things may get better, but they never get good. The West rose under the aristocrats, and declined under democracy. Historical fact cannot be argued with; even the most obstinate see that it is time for change, and perhaps, accepting what worked over democracy.

We see a brutal contrast between this humble, elegant, fearless, and inspiring woman who dedicated her life to public service and the politicians and bureaucrats who are in office to get rich and then get out while leaving the rest of us to face an increasingly dystopian diversity wasteland of toxic ruins and violence.

We also see that aristocrats by nature aim for the good, while politicians and bureaucrats focus on the bad, namely those who are failing and how they can be subsidized by taking from the creative, productive, functional, and constructive.

The time has come to leave behind the government of children and upgrade ourselves to looking toward a yet uncreated future. We have too much to lose, and so much more to gain, if we stop the system that builds itself on constant infighting in order to conceal how little it functions.

Queen Elizabeth watched the world collapse around her while knowing that it was happening. For someone that bright, telling themselves lies about how the failing Regime is in fact succeeding because it is “progressive” is not an option. They had to face the decay head-on.

Such people know that decay can be stopped by ceasing to engage in dysfunctional behaviors, removing the rotted, and nurturing the good so it takes the place of the destroyed. It is not difficult. It can be done at any time. This moves them forward: bringing us closer to that place where we have the sack to make that difficult choice.

We have lost a Queen and the whole world mourns because she was a connection to the past when things still made sense. As this mourning continues, and democracy flails like a fish on land in the background, more people are coming to the hard realization that to participate in life, we must restore the aristocracy and yeet democracy.

Timelines | When the Money Boat Comes to You, Seize It and Never Let Go