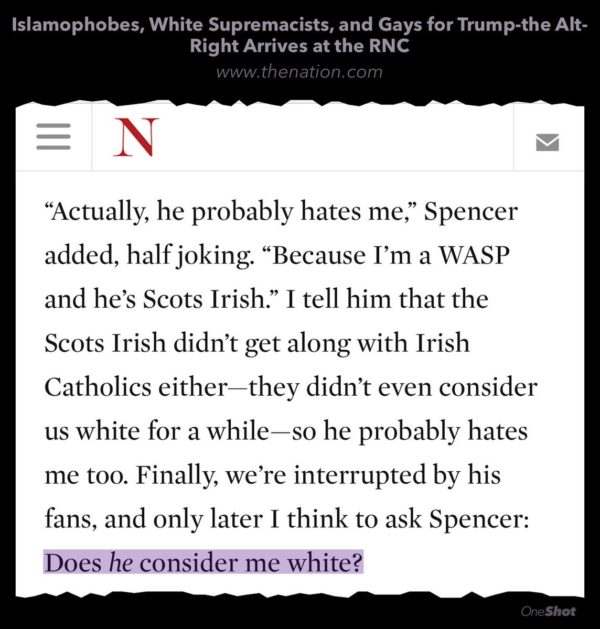 Most people talking about immigration concern themselves with “assimilation,” or whether new group can be absorbed. Consequentialists ask what the results of doing so will be, since the process of assimilating others means altering the genetics of the original group. Since traits are heritable, this means an elimination of what made the society what it was in the first place.

Recently Richard Spencer, who is both subtle in trolling and insightful at leading with hearts and minds, brought up “The IQ”: the question of whether different European groups can combine into the same nation, given the fact that Europeans split into three general groups — Western, Southern/Irish, and Eastern — which are remarkably different.

Some, including those on Amerika, have pointed out that combining different groups with different clinal trace admixture can result in an increase in extraneous DNA within the combined group, effectively destroying what it is to be “European” by mixing it with traces from Southern (Middle Eastern admixture) and Eastern (Asiatic admixture) which then pile up and drown out the original group.

The Irish, for example, were a favorite target of groups such as American Nativists and the Ku Klux Klan, who pointed out that not only were they Catholic, but they were different, betraying past migrations of middle eastern people through Iberia into Ireland where they mixed with the Neolithic remnants. Different is a matter of degree, but different enough means loss of our founding group.

As America separates into different ethnic groups in the wake of the failure of diversity, the Irish Question raises itself time and again, and implicates other questions of ethnic confusion. The Old Inheritance has more with a warning of how “white diversity” may have caused the liberalization of America:

Clinton Stoddard Burr wrote a book, published in 1922, which is very pertinent today. In the foreword, he indicates just how important he believed the subject he wrote on would be in the near, and more distant future. It seems he was prescient:

[â€¦]In fact it is high time that we should comprehend the primary cause of the loathsome plague of anarchy and Bolshevism. It is time that we should be alive to the fact that most of the hordes of immigrants who have been pouring into the United States from countries of Southern and Eastern Europe, from lands inhabited by races impregnated with radicalism, Bolshevism and anarchy, belong for the most part to the lower strata of humanity from those regions, who prove to be most susceptible to the wiles of the radical agitator. Surely this view, in itself, is a logical plea in advocating restriction of a certain class of immigration.

[â€¦] All thinking people are awakened to the realization that we must choose our future entrants to this country from such as show assimilable qualities of mind as well as favorable physical attributes. The callous exploiters of cheap labor and the incurable sentimentalists stand alone in their misplaced loyalty to our fatuous boast in the past that America was the haven of the down-and-out, the dependent, the oppressed, the pauper, the foreign agitator, the unassimilable and what not.

Western Europeans cluster together because they are genetically similar and thus share the traits that make them aware of certain needs and challenges presented by existence; this is what makes them the reflective people who form the basis of Western Civilization. Introducing other groups will merely destroy the Western Europeans through outbreeding, and lose those shared traits for Western Civilization.

In addition, the white diversity causes new groups to feel alienated from the majority, and thus to partake in the ironist and anti-majority sentiments of Leftism. That, coupled with the resulting loss of social standards, destabilizes the nation and thrusts it into a spiral of infighting over the new agenda.

Personal experience tells me that the vast majority of Irish, Italian, Greek, Slavic and Jewish people in America lean Leftward. There are notable exceptions who are praiseworthy, but they are a relatively small minority. This is likely a consequence of these groups finding themselves in a nation where they almost fit, but not quite fit, and therefore, feel anti-majority sentiments.

A sensible response is to realize that the American Nativists were probably right. Only one ethnic group can exist in a nation; Western Europeans, who cluster together, make up that group in America. When we deviate from that, we go down the path of internal division that ends in our current diversity nightmare and screaming descent into Leftism.