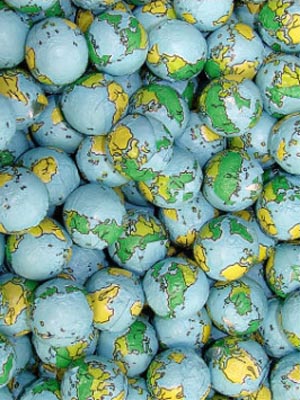 Egalitarianism is the foundation of both liberalism and globalism. In fact, globalism was previously known by its true name of internationalism, a liberal policy.

Its goal is to ensure equality for all people worldwide by destroying barriers between them. On the positive side, that means no restrictions; on the negative, it means conformity and no uniqueness.

The goal is to make one-size-fits-all people who are like interchangeable parts, both predictable and non-essential, and to use their need to make a powerful moral state.

Much like the French Revolution, which dissolved when the revolutionaries ran out of innocent people to kill and began murdering each other, globalism has trouble when anyone disagrees.

It tends to wage war on them using its superior wealth, and justifying that war with its “moral” superiority, but to a distant observer, it would be seen as a form of conquest through uniformity.

In simpler terms, when the entire world are converted into the type of harmless opinionless people we find in our suburbs, we will finally feel safe. So we must destroy all values different from that ideal.

In the weeks after the 9/11 attacks, Americans were mostly stunned. Up until that moment they were certain that every person in the world understands that theyâ€™re right, that their economy is better, that their constitution is fairer, and that their democracy is the only way to bring freedom to human beings. â€œFreedom itself was attacked,â€ their inarticulate president said.

Yes, how could they turn on us? We are bringing them freedom, equality, justice, tolerance, diversity and a dozen other buzzwords that symbolize much but mean nothing.

What they see is us bringing Coca-Cola, high divorce rates, latchkey kids, a population that has to drink and rut like pigs to be “happy,” neurosis, public immorality, legal corruption, trash TV, McDonald’s, laws that penalize the innocent in favor of the victim, and other great injustices.

There may be no one-size-fits-all rule, because unlike what happens in the political concept of equality, in life there is no equality. First, there’s no linear standard; second, even within that, people have different needs based on their abilities and inclinations.

Egalitarianism in other words may be an error on a practical level, although on an ideological (really, “social,” since the goal of ideology is to convince others to deny reality in favor of a preferential vision) level it is pure brilliance.

It may also be the death of us. Like Rome in the late stages of Empire, we seem to have lots of power, but not much actual joy in life. We define “happy” as distracted and not miserable on the surface, but the continuing weirdness and dysfunction of people who should know better suggests this first-world population is anything but “happy.”

But we’re afraid to give it.

Like many things in life, egalitarianism is one extreme of a spectrum that tends between two such extremes. Namely: the everyone-is-equal crowd versus those who insist on some kind of hierarchy, where some outperform others.

Mr Cameron also warned that parents of youngsters who play truant face having their benefits cuts.

He pledged to bring â€˜rigourâ€™ back into Britainâ€™s classrooms and condemned Labourâ€™s â€˜prizes for allâ€™ culture, which frowns on competitiveness.

Mr Cameron is under increasing pressure to reassure Tory MPs and voters that the Coalition is in touch with middle-class anxieties.

His speech was seen as a deliberate contrast to pledges by Deputy Prime Minister Nick Clegg to drive up standards in poorer areas.- Daily Mail

The divide is clearly spelled out: equality for everyone, which means focus on those who aren’t up to par, or competitiveness designed to produce those who are above par.

People demand equality out of fear. They fear that they won’t measure up. As a result, their fear trumps their desire for achievement, and they demand to be released of their fear.

They hide this behind fancy language, but the question they are ultimately asking is: “Do you want your child to be guaranteed a prize at the science fair, or do you want your kid to get a big prize if they do much better than average?”

This is the age-old conflict of societies. On the level of socialization, of course the correct answer is that everyone is equal, and everyone is included. That will make you popular.

On the level of the inner self and the intelligence of our best people, that is insane. To make everyone equal destroys our ability to keep evolving by providing rewards for sanity and disincentives for insanity.

Competition however only rewards some and makes the vast majority feel average. Then again, removing competition makes them think they are capable of roles for which they are clearly incompetent.

These two sides — egalitarianism versus Social Darwinism — constitute the essence of the left/right divide, which contrary to trends, is more real than people believe.

You either want equality or competition (which leads to quality). There is no middle ground.

Globalism is the notion that by mating liberal internationalism with another form of anarchy, consumerism, we can make a perfect society that no one will refuse. September 11, 2001 showed us that globalism is in fact in error: not everyone wants part of this happy world, not even the “happy” people living in it.

But because globalism claims to be moral, and construes itself as a rebellion, it is the “invisible politic” which cannot be rebelled against or debunked, since in its anarchistic state it accepts all viewpoints. That is why globalism is powerful, and why commerce clings to it: it cannot be overthrown.

And globalism offers you a certain kind of freedom. There can be no standards, because that creates hierarchy. Thus you get a society that’s essentially anarchy with a few political taboos and bans on obviously destructive behavior (murder, meth, rape, etc).

Yet there may be another kind of freedom which lurks outside of one-size-fits-all. It’s not the freedom from the fear of being average, but the freedom to be above average, or just to take a different path:

Until very recently, the centralization of administrative power under expert control â€” what we might call, for shorthand, rational planning â€” was considered essential to public policy solutions. In the industrial and post-industrial eras, advances in science and technology seemed to promise a future of unprecedented efficiency. Centralized programs could coordinate masses of people toward desired goals, in areas from government to business to philanthropy to city planning. Modern policy problems were considered to be, fundamentally, systemic issues too complex for local citizens and requiring expert professional attention. Technology and globalization would only increase the value of this approach.

Now, however, trends have begun to shift in a very different direction. Some of the preeminent projects of rational planning are foundering or altogether failing. The entitlement crisis, the housing bubble, and other prominent stories and scandals have made Americans more skeptical of distant experts. Advances in technology and business have created new possibilities for individual and local empowerment. The pressure is on for products, services, and organizational practices that will enable consumers and participants to solve problems themselves.

By contrast, rational planning viewed human beings mainly in the aggregate, essentially as a collection of data points that could be predicted and manipulated based on such categorical differences as race and gender. The messy web of mediating institutions â€” families, churches, nonprofits â€” could be sidestepped. Mass programs, which could operate on a scale impossible in the pre-industrial age, would be able to deal directly with the masses, matching problems with solutions and products with demand. Freed from the complex and sometimes onerous network of relationships formerly required for political life, Americans would interact directly with the powerhouses of finance and planning: the government, major corporations, big foundations, and so on. – The New Atlantis

Rational planning is the one-size-fits-all approach; it denies the organic hierarchy of humanity, and the web of culture, beliefs, values and informal institutions that it creates.

Instead of trying to create an ideal based on egalitarianism, we could swing to the other side and allow hierarchy — including the ability for local communities to do things differently.

For example, if New York wants to be multicultural/cosmopolitan/diverse, that’s fine. If Heidelberg doesn’t, that’s also fine. No one-size-fits-all in the name of making the world safe for egalitarianism.

Throughout all of this, we have to remember that egalitarianism was not a goal but a device and a justification used during the French Revolution. When you want to kill a king, you need a good reason. Preferably one that fools millions of proles into thinking it’s a complex moral theory that, by virtue of being complex and reductive, is the only correct path.

Those ancient justifications are now causing us endless problems:

Liberal ideas were developed in the good old days when landowners, slave owners, and business owners were the bad guys. So liberals developed the notions of protest, civil disobedience, and passive resistance as the means by which the oppressed, assisted by their educated allies, could register their protest against injustice, expose the hypocrisies of the powerful, and win through to a just society.

But now a new justice movement has emerged onto the political radar. Only this time it is not a liberal movement, enthusiastically supported by our liberal friends. Instead this movement, the Tea Party movement, is anti-liberal. It has arisen to oppose the injustices of liberalism.

As you might expect, our liberal friends are not reacting very well. Protest, civil disobedience, mass meetings are one thing when they are used for a progressive purpose. When used by conservativesâ€“even conservative religious womenâ€“liberals talk of â€œincivilityâ€, of â€œterrorismâ€, of racism, and worse. – CAA

I post these disparate quotations to show that what we say here at Amerika.org is not that far from the mainstream; we’ve just connected a few more dots.

Connecting dots is how civilization is built. Computer code is based on libraries, laws are based on previous legal cases, customs are based on what worked in the past.

We are entering a time of vast change when we cast off the obsolete liberal demand for egalitarianism, which has brought us nothing but grief, and instead focus on reality and competence again.

This angers those who benefit from globalism, mainly international business (regulation legalizes all behavior except that which is banned), and the lynch mob of miserable people who want to tear down others and make them miserable too, preferably through some unassailable idea like morality.

But aren’t we tired of a past that reveals an unmitigated slow decline, and ready for health again? Illness is so boring.