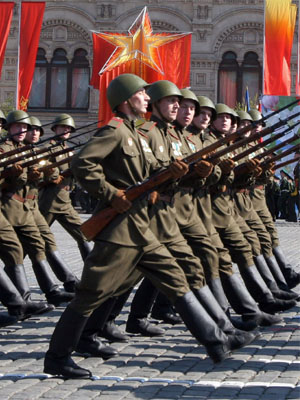 It is no longer de rigueur (French for “trendy”) to laughingly dismiss leftists as a bunch of Reds, but the idea lingers with us because like most stereotypes, there is truth to it.

Our modern liberals may not be Communists, but they act like them.

Even if they have mixed capitalism, Christ and strong national defense into their egalitarian class warfare agenda, today’s liberals have the same obsessive ideological mania as communists.

Their doctrinaire dictum: be pure in the ways of our ideology, or you’re the problem with our society, and you must be destroyed.

Not content with tolerance, they demand a norming of all things formerly deviant. When the extremes are OK, all are accepted, so we the normal must adopt the extremes. For ideology!

Beneath these layers of ideographic hocus-pocus however, the leftist like the Communist before him has a very basic psychological demand. If everyone is equal, no one can tell me “no.”

The essence of all leftism is the same. Equality creates a lowest common denominator standard and makes it illegal for others to discriminate against the poor behavior of others. That makes all behavior accepted.

The neurotic, criminal, perverse or underconfident individual likes this. It’s a law that forces social acceptance of all individuals, thus naturally including them. The fear of the individual creates a snowball of fear, and soon people are afraid to not join.

We can see this same Communist-like mania in our modern liberals. Pornographic videos in schools. Speech codes that are bigoted double standards. Hatred, gnashing of teeth and resentful vengeance against all that is normaly, healthy or hopeful.

They get what they wanted. Their ideology neutralizes others by removing their ability to criticize the behavior or abilities of the leftist. This makes a paradise for parasites: competence and goodness are irrelevant, and society owes them a living!

It is not the powerful characters who like this. It is the embittered and cornered. Every ghetto has its pimps, every blighted railroad town its corrupt sadistic sheriffs, every trailer park its thuggish loan sharks. These are the ones who feast from liberalism.

No matter what our leaders do, it is a pittance compared to the everyday graft, sabotage and incompetence of such people — average people, including all those whose minds have been replaced by lbieralism — and far less pervasive.

When a society it is healthy, it has regulated its people to keep out the insane. The healthy grow up innocent, brave, honest, curious and proud. Their pride is their identity, their honor, and their reason for wanting to excel.

Communism seeks to smash all those things. Curiously, so does modern liberalism, no matter how “neoconservative” it seems. Are these people Reds? It doesn’t matter; they act enough like them that we avoid them with the same wary paranoia that marked the end of the Soviet Union.

The perfect customers | The golden rule