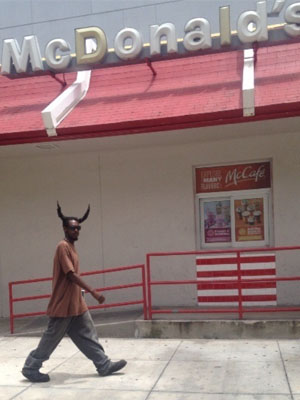 It can seem strange, or out of place, even, that a Danish conservative might submit an article to an American website. I am after all a conservative who take prides in his cultural background and language. Why should I be interested in a website named after another country?

The answer may lie in the mysterious K. Amerika is spelled with a K where normally a C would reside. The website is explicitly clear about the difference between the two: “America with the c” is “the old country,” where as “Amerika with the k” is a sort of all-pervasive cultural rot. There is a clear distinction.

But on the other hand – there isn’t. Not for me anyway.

“Amerika” signifies the wrong way of America; “America” the right way. But in the Danish language, “Amerika with the k” is in fact the correct way to spell — well, America for Americans. To me Amerika as a “good” country and an healthy ethos is not something distinct from the ‘bad’ Amerika of the cultural decay. At least not if you look at it from the perspective of appearances.

As a “foreign” Westerner, I know the cultural products. I know about Amerika from the news. I am confronted with the consequences of “den amerikanske” way of life every single day. I can take a walk in streets of Copenhagen, and see the workings of Amerika clear as sunshine.

Even though Amerika is something very real and “in your face,” it is also something almost invisible. Something like what the very “Amerikan both with the c and the k” criminal mystic (kriminelle mystiker) Charles Manson described as “appearing out of nowhere doing nothing.”

Communicating this paradox is in a way the whole idea of Amerika.org. This is what the writings on Amerika.org tell me: That Amerika in fact is both something real and something unreal at one and the same time. Not just for me not living in America, but evidently for Americans as well.

The concept of Amerika as outlined on Amerika.org is that of a great power, which, even though it is in a way unreal — and certainly unrealistic — imposes itself on the real world. Amerika namely signifies anti-values like consumerism, liberalism and solipsism — which are all basically variations on a single theme: That outer reality is in some way less real than what goes on in the safety of your own minds.

In this way, Amerika is unreal in the most direct sense of the word: Amerika is the widespread notion, that reality doesn’t exist in — well, reality. That reality itself can be made into an opinion, whilst reality by its very nature is everything but.

It is the idea that reality itself has to step back, as it is deemed less important than what the individual thinks about reality. Amerika is “just, like your opinion, man.” Ironically, the widespread notion of reality being unreal produces very real consequences. And in this way Amerika is something extremely real.

Amerika is no doubt a symbol of a deep crisis in the entire modern world. But on the other hand, the existence of the mass-delusion that is Amerika is also a great opportunity. For it is clear that not everybody can see that Amerika is in fact real, in its own really unreal way.

In fact, only few people seem to really grasp the concept: That humanity quietly agreeing on obvious illusions to escape the harshness of the ego-less uncaring of the world has far-reaching consequences. And that we will have to face these consequences sooner or later, as we indeed are a part of the very world that we treat us non-existent.

What is it that essentially makes the people who understand what Amerika truly is, different? These people find it futile and stupid to pretend and convince themselves, that Western civilization is not in decline. They don’t feel the need to escape into their own minds, for fear of the larger reality. In fact, they realize that the very source of Amerika is the fact, that many people cannot face it.

Many people cannot face what they fear the most: That reality is much greater, infinitely more rewarding and inspiring than their own egos and illusions. And this is the great opportunity of Amerika: The prevalence of the obviously false gives us the opportunity to truly see the real in other people – whether we and they like it or not. For the false is everywhere.

As the background noise of people trying desperately to drown out reality becomes ever more immense, the soothing silence of the few, who actually recognize, respect and even love reality in spite of the widespread illusions, stand out all the more. Their words and their actions truly radiate a profound silence. The silence of acceptance. They are not busy pretending that reality will go away if we ignore it.

Amerika.org the website is a great resource for sober analysis, and insight into the vastness of modern illusion. It is a glass of cold water after 40 days in the desert, so to speak. A welcome reminder that sane people still exist, trying to make a positive difference in spite of –, yes, even because of — our current cultural wasteland.

It is a voice of those, who refuse to be defeatist. At the same time, it is a positive encouragement to participate in the sanity. But most of all: It is a resource of inspirational words. Trying to put words to good use and truly communicate in a time, where language often borders on meaningless noise.

I guess you could say that I live in Denmark in much the same way, that Americans live in Amerika. But the difference of words is not very important, for it is essentially the same ‘place’: Reality in the modern world. A reality that because it denies reality is going to cause Western civilization to collapse.

Amerika.org is about not just seeing the problem, but finding a way to start over. I don’t mind. For starting all over is what Amerika is all about. Sure, it can be hell sometimes — but it can also be rewarding beyond possible measure.