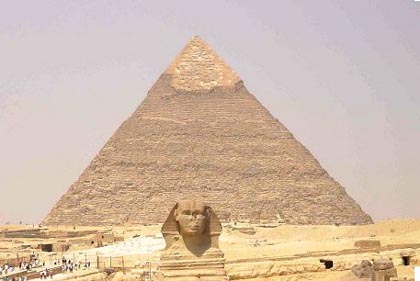 If you tried to list the longest-lived things, built by man, chances are that Pyramids would be at, or very near, the top.
And why is that? Letâ€™s look first at the geometry involved…

The base is huge. Many, many stone blocks, arranged in a square, forming that base.
Going up, many more blocks, never quite reaching the edge of the blocks beneath.
And so on, up and up. The staggered sides ensure that nothing topples.
The weight decreases with each layer. Gravity is accounted for.
Nearing the top, there are fewer and fewer blocks involved, but they remain geometrically identical to every lower layer. The whole thing forms a coherent and predictable pattern.
Finally the top block is set in place. The pyramid is complete.

Why is that block at the top, at the top? What makes it so special? So privileged?
Nothing. It just happens to be the last block.
Why are the other blocks, near the top, in a higher position than the lower ones?
No reason, other than they came later, and the lower blocks had to be there, in order to support the higher blocks.
Itâ€™s not fair!
No. Itâ€™s not fair. Itâ€™s sensible.
Itâ€™s discrimination!
No. Itâ€™s not that, either. Itâ€™s just the way it turned out.
But some blocks are higher than others!
Yes. Itâ€™s called a hierarchy.
But thatâ€™s not right!
Isnâ€™t it? It works, though, doesnâ€™t it.
All blocks are equal! Some should be moved!
By such reasoning, other blocks would then become unequal.
It’s biased!
Not it’s not. It is perfectly, beautifully, efficiently symmetrical.

There are theories about the Pyramids. Many say they were built by, or copied from, aliens.
Wherever they originated, and whoever, or whatever, designed them, they are stunning examples of both stability and longevity. They even have a pleasing aspect. Impressive!
Gravity actually makes them stronger, rather than weaker, as in other forms of construction.
But there is more than the structure itself: there is the concept…

If aliens did, in fact, provide this specialized engineering, then they were benign.
And advanced. Encountering witless savages, running around barefoot, and crawling out from under rocks, they must have been moved to point out that there was a better way of doing things.
For not only is a Pyramid the longest-lived of structures; it is also the longest-lived of social systems. Consider…
Every component, every block, or human, in this case, is essential to the whole structure.
Every level of components is essential. From the base, to the summit. Each component has its part to play. Each one is involved in the whole. Now thatâ€™s a viable, and lasting, social system.
We can easily see this. Unless we suffer from the disease of inversion… 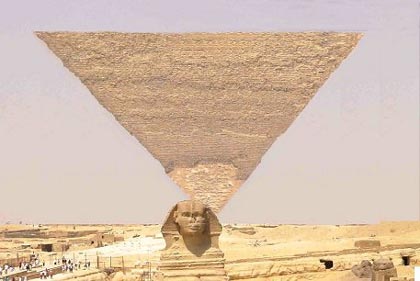 And you, dear leftist, are invited to join our happy band of would-be survivors.
All you need to do, is understand what happens to upside-down societies.
And all will be forgiven.
But hurry: that pyramid isn’t going to wait around, forever.