Pretending war will not come 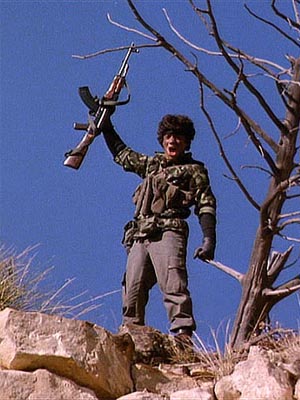 You can mark how far into decay a society has fallen by how much it does not recognize its own cliches.

For example, “History repeats itself.”

If the Crusades and the Mongol invasions can be explained away as not part of history, our solipsistic little homily about history repeating itself might be safe again.

But instead we know that unresolved conflicts lurk in our past — and so, our future.

No one wants to think about war.

All war does is lose elections, end conversations, make girls not call you back and make your friends think you’re an angry person.

So we cannot mention war publicly.

Luckily, this is a blog, so we can mention war as a “thought experiment” and point out how all of the above conflicts are going to converge in the relatively near future. You might have to wake up, stop pretending war is optional, and defend yourselves.

Imagine for a moment that the Crusades were not about religion, but about dominance of the middle east as a means of preserving European integrity; imagine that the Mongol invasions were not the act of a lone madman, but part of a ten thousand year struggle for who rules the Eurasian landmass: Europe, Asia, or the “Eurasians” e.g. mixed people in the middle, including Eastern Europeans, parts of the Middle East and parts of former Armenian territory.

When do the Mongols invade again? When does the middle east attack again? It’s ongoing and we’re just in denial.

China has officially put the United States on notice that Washingtonâ€™s planned attack on Pakistan will be interpreted as an act of aggression against Beijing. This blunt warning represents the first known strategic ultimatum received by the United States in half a century, going back to Soviet warnings during the Berlin crisis of 1958-1961, and indicates the grave danger of general war growing out of the US-Pakistan confrontation.

Responding to reports that China has asked the US to respect Pakistanâ€™s sovereignty in the aftermath of the Bin Laden operation, Chinese Foreign Ministry spokesperson Jiang Yu used a May 19 press briefing to state Beijingâ€™s categorical demand that the â€œsovereignty and territorial integrity of Pakistan must be respected.â€ According to Pakistani diplomatic sources cited by the Times of India, China has â€œwarned in unequivocal terms that any attack on Pakistan would be construed as an attack on China.â€ – EUT

Of course this is moronic posturing. Pakistan isn’t China. The underlying message is: are you a sick old man, USA, since you elected your least qualified president ever just because he was black? Your economy is failing, your society cut up by racial and class conflict, and you can’t figure out if you’re going to be a liberal failed state or a conservative rising state. Maybe it’s time to challenge you.

The saber-rattling goes on as the USA tries to maintain a technological edge, despite the hard efforts of millions of useful idiots who believe that if we just stop making weapons, world peace will reign:

A new Pentagon forecast showing the total cost of owning and operating a fleet of F-35 Joint Strike Fighters topping $1 trillion over more than 50 years has caused a case of sticker shock in Washington.

And that price tag doesn’t even include the $385 billion the Defense Department will spend to purchase 2,500 of the stealthy planes through 2035.

During a Senate hearing this month, Sen. John McCain (R., Ariz.) called the $1 trillion figure “jaw-dropping,” particularly when compared with the costs of operating other aircraft.

“I appreciate this estimate is still early and subject to change, but we need to know that the program is going to bring that number down,” he said. – WSJ

Welcome to fifth generation fighters. China has one, based loosely on a Russian design (no, this is not a repeat from 1961). They’re expensive because they’re basically flying radar platforms that are fast, stealthy and can direct all sorts of munitions simultaneously to blow things up very efficiently. The next empire will have a bunch of them. Who will it be?

But, the voters don’t want to think about this; war is terrifying, and we’d just rather not deal with it. Maybe we can sing kumbaya, plaster everything with stickers that say DIVERSITY IS OUR STRENGTH and then make a new hit television series based on that concept. Hey, we’re rolling in money… as long as the rest of you think that us buying our own products constitutes “value.”

Asked in March if he would consider putting a Muslim in a top position, the Atlanta businessman told the liberal blog Think Progress he wouldnâ€™t.

â€œAnd hereâ€™s why: Thereâ€™s this creeping attempt, thereâ€™s this attempt to gradually ease Sharia law and the Muslim faith into our government.â€

In the appearance on Beckâ€™s radio show, Cain admitted that he responded to the question hastily.

â€œI immediately said â€“ without thinking â€“ â€˜No, I would not be comfortable,â€™â€ he said. â€œI did not say that I would not have them in my cabinet. If you look at my career, I have hired good people regardless of race, religion, sex gender, orientation and this kind of thing.â€ – Politico

Take it from a (realistic) black dude — that boilerplate crap about diversity being our strength is not to be believed. It’s there to keep you thinking that our problems don’t exist and to keep the proles from rioting. That’s all. It is pure manipulation, not an actual value, and the TV watching wide-eyed idiots (who have never encountered reality in their lives, think meat comes from a grocery store, and are sure war is never necessary) lap it up because they want to believe that the world will just be fine if we leave it alone.

That way, they can keep living their anonymous lives of quiet desperation without the threat of their fragile neurotic stability being upended.

When you get to be president, they take you out of that amorphous pleasant illusion zone and make you face hard political facts: if you don’t maintain power everywhere, someone else will. And they will gun for the guy at the top. That’s you.

Why else do you think the Patriot Act still exists? It’s necessary. We’re surrounded by enemies and their spies. That’s why Obama didn’t touch it.

Why else do you think we’re still waging war worldwide? Because if we don’t smash back our enemies, they gain power; if we smash them and don’t occupy the places we bashed, someone else will surge in and take power.

The US has more than 200 troops in Pakistan helping to train the army. But there are said to be intelligence and special forces operating there.

A spokesman at the Pentagon said that within the last two weeks Pakistan had asked the American military to reduce its footprint, and the Americans were doing so, pulling out some troops. The numbers are quite small. – BBC

For example, look at Pakistan. The USA was once their sugar daddy; now, they want China to be big daddy.

What’s going on behind the scenes is maneuvering for power. Pakistan resembles the Islamic parts of India. Hindu versus Muslim, China versus India, China versus USA — it’s all in there.

We can deny the beast within, but it, too, is always there. It waits to be unleashed in some Pearl Harbor style moment when the voters finally realize that they can no longer camp out in oblivion, and need to return to focus on reality. Until then, democracy does what it does best — space out and buy stuff.

When it comes time for war with China, Russia, India, Brazil or a combined Eurasian or Middle Eastern front, the USA and Europe are going to be at a disadvantage. First, since we’re seen as the Caucasian tribe, if one of us gets attacked, the other will as well. Second, we’re tiny in people numbers compared to these enemies, and nations full of starving people don’t mind high casualties — but first world European-style nations do.

For all of our bluster about brotherhood in democracy, we will have one way to win this conflict. We cannot put together a professional soldier class and send them out with full expensive equipment to meet this challenge; we will simply not have enough people.

Instead, we will have one choice, which is to meet our enemies using the methods they use.

Normally, we lose wars by fighting Asian wars like European wars. The Eurasian and Asian challengers to the hegemonic throne will send a sea of soldiers at us, each armed with a rifle and/or grenade launcher. We will kill then of them for each one of us they kill, but they will outnumber us 7-to-1, so we’ll tire first.

The only way we can win is to produce a sea of inexpensive, disposable, terrified and manic soldiers and send them rushing at the enemy. We’re going to need to round up all the illegal aliens, web designers, diversity consultants, administrative assistants, cigarette salesgirls, window washers, baristas, interior decorators, marketing directors, ESL teachers and other people without whom our economy will function just fine (or better, since it will focus on value-production instead of consumer products).

We will need to hand them all rifles, give them very basic training, and put them on unheated boats to sail into the combat zone. Like the successful Russian invasion of Germany in the middle 1940s, we too will feature a new motivational factor: machine guns at the rear not front of the troop column. It will be rush forward to die, or just die, for our disposable heroes.

If you’re like most people, raised on a steady diet of media illusions and pleasant lies, the above will be shocking and horrible. But it is reality, and it has always been here; you just took a vacation on your post-WWII wealth and the comforting deceptions of liberal politics. Now war is upon you, and there’s no point pretending it will not come.