President Tulsi Gabbard: The Good, The Bad, And The Evil 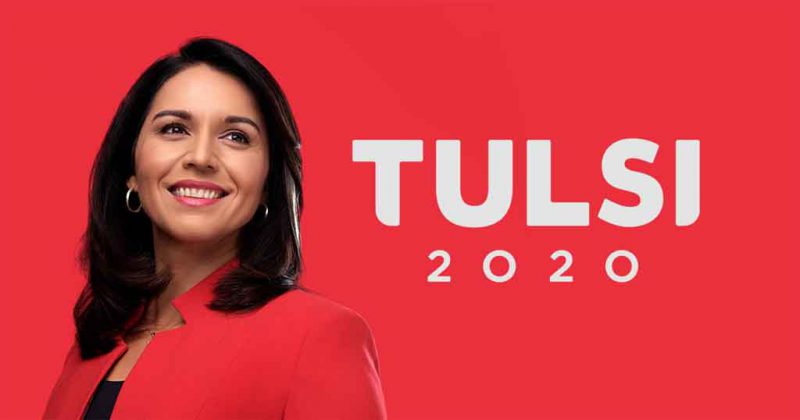 A lot of people are admirers of Democratic Congresswoman Tulsi Gabbard. She has a lot going for her as a human being and has in many ways led a very impressive life. Therefore, a lot of people tend to sympathize with her and wish her well. I respect and wish her well also. Just not in the professional realm of politics. She does some things well, she gets other things extraordinarily wrong. As a result of the goodwill she inspires, those mistakes of hers would raised to a rather high exponential power if she ever got put in charge of anything really important.

Today is an exemplary day to post on a certain Democratic Primary contender that garners more sympathy and support than most other Democrats. Today is the day where Tulsi Gabbard can be formally annointed The Slore-Slayer.

California Senator Kamala Harris is dropping out of the crowded field of Democrats angling to become their party’s presidential candidate. Harris tweeted a message to supporters on Tuesday saying “it is with deep regret—but also with deep gratitude—that I am suspending my campaign today.”

I read Senator Harris’ sincerely deep message and think only this. Nice start. Now go suspend the rest of your useless existence as a fait accompli. Slore-Slayer is a noble title that signifies power and might. When Tulsi can drop the female canine hammer on her opposition like this, you honor her or perhaps face similar consequences.

“Senator Harris, your response?” Folding her campaign was the only response she had to what was an obvious rhetorical checkmate.

And that’s not the only positive aspect of what Congresswoman Gabbard brings to the realm of political debate. Maybe you have friends or relatives who are in and out of garden spots like Iraq or Afghanistan seemingly every other year getting shot at. Perhaps you’ve seen billions of dollars vaporized to provide “protection” via weapon systems like the F-35 that seemingly never quite make it near their promised operational capabilities. Perhaps you’d just like to see the (((Bill Kristols))) of the world have their sorry offspring sent on vacation to the garden spots or get made to fly the billion-dollar Fustercluck of a Gold-Plated Death Trap. She follows in the worthy path of both Harry S. Truman and Dwight Eisenhower by viewing the Military-Industrial Complex with a proper professional skepticism that will tend to keep the rip-offs in check and the military personnel alive.

The native disgust and revulsion that normal human beings feel from being around the viscous oligineaity of someone like Kamala Harris and the proper scientific skepticism that Congresswoman Gabbard plies when evaluating military courses of action are great positives. Yet, regrettably, there is the rest of the package. Upon perusing her Presidential platform at Tulsi2020.com, the logical contradictions and impossibilities loom legion.

Like many on the Left, she begins her descent from rational viability with unworkable promises regarding healthcare. Here’s the platform.

As president, I will work to ensure all Americans have that quality healthcare through a single-payer system that is incentivized to increase health and prevent and heal disease, whilst allowing individuals to access private insurance if they choose.

Single-payers are inverse monopolists. They are the ones that pay for anything, and thereby they decide what gets bought and who stays in business. Put that in the hands of a democratic institution, and you can bet money and win that a corrupt cartel will get people voted in to get their hands on that money. We already saw Big Pharma and the medical device industry both drive ugly corruption monster-trucks through the original draft of ObamaCare. TulsiCare will fare no better.

By redirecting the billions spent every year subsidizing the fossil fuel industry to instead invest in the industries of the future — expanding wind, solar, and geothermal — we will guarantee a cleaner, safer energy future and create high-quality jobs.

Except that President Gabbard could not. There is no rewrite of physical laws available that will allow this to happen within the next eight years. That period of time will very, nearly almost; but not quite allow for the Non-Recurring Engineering that will allow wind or solar energy to work. This is particularly true of Amerikan regions that are frequently becalmed or that lie North of more tropical climes. The bottom line here is that Tulsi Gabbard means well, but she simply needs a much better battery to store the harvest from inconsistent point sources of energy.

For generations, Social Security has provided economic security and lifted millions of Americans out of poverty. I will ensure the program remains solvent without reducing benefits for those who rely on it.

I like Congresswoman Gabbard and am trying to be much nicer to her than to Joe Bite-Fetish or Kamala “Slore of Babylon” Harris. She probably means this when she says it so we now need to discuss why inflation makes this a very expensive, if not impossible, promise to keep. It starts with background CPI which eats 2% of the purchasing of fixed-income recipients. Taking a benefit of $10,000 today and stating it will be untouched in 10 years means that you actually have to raise the nominal payment by a factor of 1.02^10 in order to protect beneficiaries from stealth taxation.

Yet this background radioactive currency decay is only part of the problem. Urban CPI measures outpace rural measures of comparative market baskets. Amerika’s population is moving from the countryside to the cities. The cities get more expensive, more rapidly. Social Security benefits, integrated over the entire recipient population, could therefore be expected to decline more rapidly. Gabbard’s socialism, while well-meaning, and philosophically benign; would end up running out of white people’s money.

She has also spoken favorably of the “Fight for $15.” This is a national campaign to pass federal legislation raising the minimum hourly wage to $15/Hour. I recently took my family to a local resort for an afternoon of nature hiking. We passed a Mickey-D’s along the way. This Mickey-D’s had an ad up promising $10/Hour in wages. This is significantly higher than most local minimum wages throughout the state of Alabama. This what corporate Amerika has to promise people to cook fries when U3 unemployment is under 4%. If they almost literally can’t find people who are willing to put up with one of them as a boss, this is what it costs them to get the necessary labor to prepare fast food lunch.

So what happens when President Gabbard ram-rods $15 through Congress? Several things. Not as many restaurants is one. More automated process is another. Both of these adjustments to the enhanced cost of labor will lead to joblessness. But not just any joblessness. These are the first jobs people get to get off the floor and back into the economic fray. Teenagers don’t learn life skills and poor people don’t find employment under President Gabbard. The burden on the welfare state gets heavier. The weight of all this poverty could make it collapse.

Congresswoman Tulsi Gabbard would altruistically and decently lead us towards what Derek Parfit once described as The Repugnant Conclusion.

In Derek Parfit’s original formulation the Repugnant Conclusion is stated as follows: “For any possible population of at least ten billion people, all with a very high quality of life, there must be some much larger imaginable population whose existence, if other things are equal, would be better even though its members have lives that are barely worth living”

We’d have wonderful healthcare, fewer wars, maybe some alternative overpriced energy sources, but no jobs and very little purpose. President Mom is there to care for us and keep us in line. But forget about ever moving out of her basement.

In conclusion, there is some good to Gabbard. She would trample the trash of the Democratic Party the way Godzilla stomped on Tokyo subway trains. She would hold The Five-Sided Puzzle Palace accountable as if there were an actual military chain-of-command or something. There is the bad. She would waste piles of money on corrupt healthcare and clean energy legislation. And there is the regrettable ugly where she massively overburdens the welfare state and further undercuts the already increasingly tenuous economic future of the nation. Tulsi Gabbard is one of the most complete and decent human beings the Democrats have offered Amerika in the last two decades. It’s a genuine shame she would make such a crappy President.