Polls Are Wrong On Trump

by Jonathan Peter Wilkinson on October 21, 2016 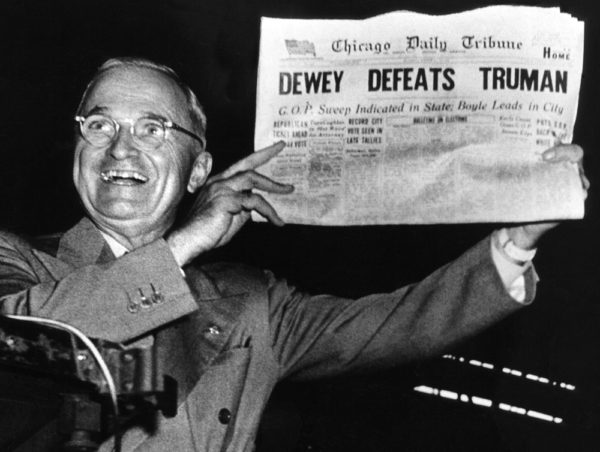 So just how do ask someone their opinion on a controversial topic? Polling can be an inexact science where poorly framed assumptions can lead to inaccurate results. Perhaps there is truth to the old line of thinking that people are more honest with their money. The Independent offers an interesting story that may or may not be reason for Trump-Pence backers to catch a second wind.

Despite a calamitous week of campaigning, betting markets on the US election are almost a mirror image of those on Britainâ€™s EU referendum at this stage. And they could be pointing to a victory for Donald Trump. Bookmaker William Hill says 71 per cent of the money so far staked is for Democrat Hillary Clinton. But 65 per cent of the bets by number are for the controversial Republican…

First, we look at the latest polling. It predominantly favors the Clinton Kaine ticket, but has a bifurcated equilibrium.

Six out of seven polls show a tie or a Clinton lead. Read nothing into this, and you’ll see why the cucks over at The Resurgent are cucking away about it being over. Yet there is an answer to that sort of propaganda.

There are also intelligent reasons to believe it’s not over….We go back to the bifurcation. There are four polls that show Clinton Kaine up by a minimum of three points. There are three that show it a tie or Trump by one. That is a clear split between these two clusters of polls.

Pollsters tend to not base their reported result om a straight-up count of their results. They pre-qualify results instead. They try to get a set number of Dems, GOPers and Independent voters. The sample usually doesn’t match this goal. They will often account for unbalanced samples by re-weighting the polls in accordance with the partisan split of voters they believe will actually vote on Election Day. If a pollster expects more Dems, that pollster reports a result that skews Hillary. Pack your preconceived electorate with more GOP voters and you get a slant towards Trump. The Dems won’t vote GOP, the GOPers won’t vote Attila The Hag. You will get what is pretty much get a census of the motivated taken on November 8, 2016 and not before.

If we look at the descriptive statistics based on these seven polls, we get a sense that Hillary Clinton does have a lead, but she isn’t anywhere near as far away as The Cucksurgent would like her to be. 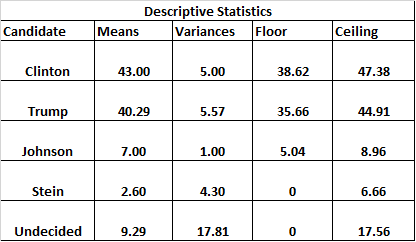 If the election were happening today, Hillary would have about a six in ten chance of securing victory. This isn’t what I’d like to see happening, but it is a far, far cry from what we are being told is happening. One good stretch of competence out of Trump and we’re even. Our friends in England see that.

The media talks up Hillary’s odds, the gambling houses reflect this in their numbers. A small bet on Trump at exaggerated long odds has positive expected value. The money goes on Trump. It should go on Trump. The pay-off is exaggerated and he has a much better chance even now than the smart guys want to admit.